It seems that the Snapdragon 710 chipset has taken over the mid-range smartphone segments as phone companies continuously release devices that carry this chip. Among those devices are the OPPO K3 and the Lenovo Z6 Youth Edition that recently launched in China. Let’s take a look at both devices’ specs, shall we? 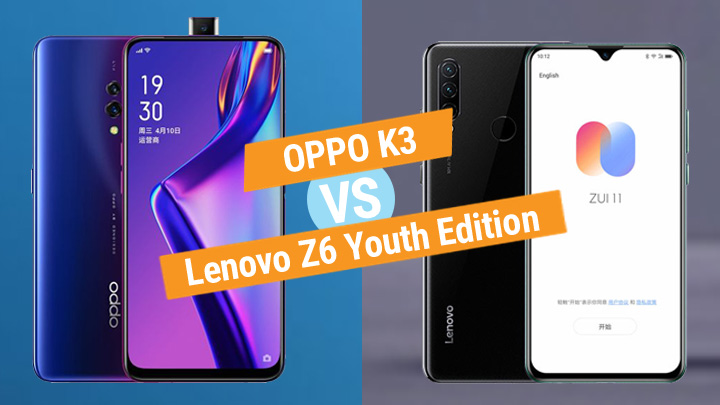 Starting with the display, the OPPO K3 features a larger screen size; however, the Lenovo Z6 Youth Edition isn’t that bad as well. Both are already good devices for watching videos although, thanks to the all-screen design of the former, you won’t be distracted with the notch design of the latter laying around the display. It is also worth noting that the latter comes with HDR10 support, providing better contrast between light and dark visuals. To know more about the difference between AMOLED and IPS panels, read our guide here.

As said earlier, both devices come with the Snapdragon 710 chipset, which performs smoothly for task executions such as social media browsing, multi-tasking, and even gaming. There’s not much to talk about in this aspect as they are on par except for the OPPO K3’s extra juice in terms of larger RAM capacity.

When it comes to storage, however, the OPPO K3 takes the cake as not only it has a larger gigabyte capacity, it is also a Universal Flash Storage (UFS) configuration. This setup means that the device will perform file reading and writing faster than the regular storages that brands use in their devices.

The Lenovo Z6 Youth Edition has a triple rear camera setup while the OPPO K3 has only two. This doesn’t mean that the former produces better image quality than the latter, though. We’ll know more once we get our hands on both units so stay tuned for that. If you are fond of selfie pop-up cameras, then the latter is the right choice as it has this mechanism. It is unclear yet if this will be the next design standard of smartphones but, it’s always refreshing to see a device without a notch.

For features, I wouldn’t call OPPO K3’s in-display fingerprint scanner an advantage yet as we don’t know how it performs as compared to the rear-mounted one of the Lenovo Z6 Youth Edition. For audio, the latter is a better pick thanks to the Dolby Atmos technology which provides better audio quality.

For battery performance, the OPPO K3 comes with a VOOC 3.0 charging technology which proved to be quite fast in our review of the Realme 3 Pro. The Lenovo Z6 Youth Edition, on the other hand, has a fast charging technology but, I can say that it would be slower than the former. Its advantage, however, is that it has a larger capacity which is always good to see in a smartphone.

Here are the prices of each smartphone variant:

If you want to have a smartphone that doesn’t have a notch design, go with the OPPO K3. It also has a larger maximum RAM + storage, as well as, a large display. Feature-wise, go with the Lenovo Z6 Youth Edition as it has an HDR10 support and Dolby Atmos technology.