The Galaxy A52s 5G is Samsung’s latest smartphone under the A-series in the Philippines. It sports a 120Hz FHD+ sAMOLED display, Qualcomm Snapdragon 778G processor, 8GB of RAM, up to 256GB of storage, and a 4,500mAh battery. On the flip side, realme is also bringing in the realme GT Master Edition, which carries the same processor and other similar specs. So now, let’s see how these two smartphones fare against each other through a specs comparison. 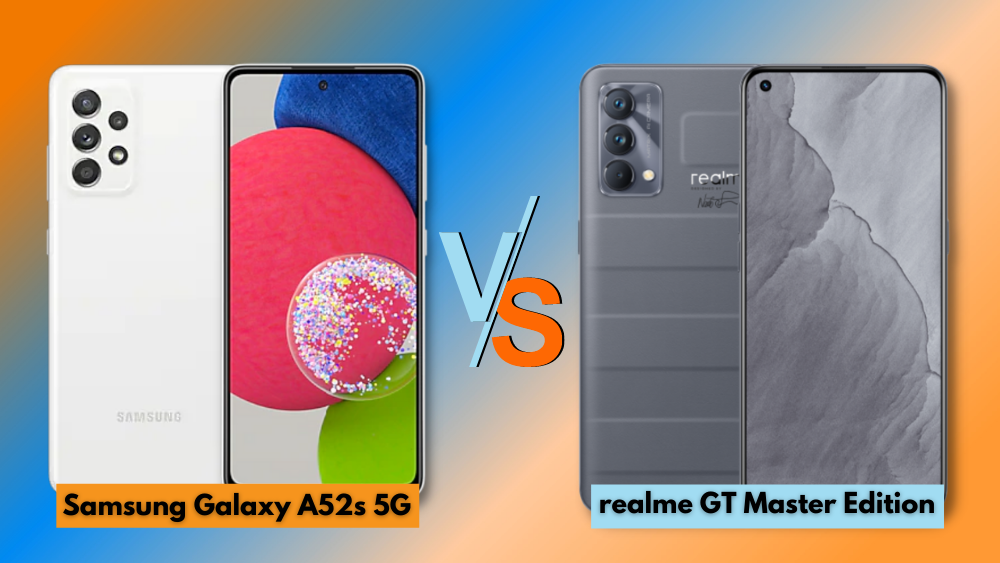 Both smartphones sport FHD+ (2400 x 1800) Super AMOLED displays. However, the Samsung Galaxy A52s 5G’s screen is slightly larger at 6.5-inch than the realme GT Master’s 6.43-inch. You can expect immersive viewing experiences with rich colors and deep blacks on both devices.

Both smartphones also got a 120Hz refresh rate for some smooth animations and transitions. On the flip side, the realme GT Master Edition has a touch sampling rate of 360Hz, giving users a snappier experience when gaming or using applications.

Powering both smartphones is the same Qualcomm Snapdragon 778G 5G and Adreno 642L GPU, so we can expect the same level of performance on both. However, do note that we can only determine the extent of their performance and thermals once we have both units for a review.

Both smartphones offer 8GB of RAM and either 128GB or 256GB of storage. Nonetheless, the Samsung Galaxy A52s takes the benefit of expandable storage up to 1TB via microSD.

With that said, the Galaxy A52s 5G benefits from an added depth sensor and higher resolution ultrawide and macro sensors.

However, for selfies, both are expected to deliver higher quality photos with their 32MP front camera.

As for connectivity, the two are powered with the same specs, such as 5G connectivity, WiFi 802.11 a/b/g/n/ac/ax (WiFi 6), Bluetooth 5.2, NFC, and dual-SIM. Both smartphones also come with a USB Type-C port and a 3.5mm audio jack.

Both smartphones also support an in-display fingerprint scanner for security.

For an added feature, the Galaxy A52s 5G also secures IP67 water and dust resistance, so the smartphone stands up to 1.0 meters of water for up to 30 minutes.

The Samsung Galaxy A52s 5G is equipped with a slightly larger battery capacity of 4,500mAh with 25W fast charging. Although the realme GT Master Edition comes only with a 4,200mAh battery, it boasts a more powerful 65W charging, so it can replenish its juice way quicker.

The Samsung Galaxy A52s 5G has a long list of advantages over the realme GT Master Edition. Thus, it carries the benefits of a better set of cameras, expandable storage, a slightly larger battery, Dolby Atmos, and IP67 water and dust resistance.

On the flip side, the realme GT Master Edition only advances with its 360Hz touch sampling rate, Hi-Res Audio certification, and 65W fast charging. Although these are its only advantages in specs, these could also attract other users.

For sure, it would be easier to decide between the two once we knew the local price tags of both devices. Perhaps the more affordable one could also be a more attractive option.

What do you guys think? Which is your pick? Let us know in the comments!