Both Samsung and Poco have recently released mid-range devices, the Samsung Galaxy A71 and Poco X2. Both phones have roughly the same display size, a Snapdragon 730G chipset, great camera sensors, and a 4,500mAh battery. If you’re considering buying one of these devices, check out our quick spec comparison to help you decide which to get. 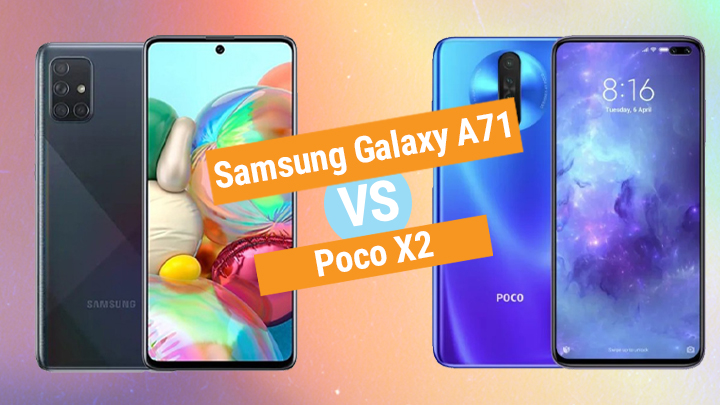 Starting with the display, the Samsung Galaxy A71 is slightly bigger, measuring 6.7 inches while the Poco X2 measures 6.67 inches. An important difference between the two is that the Galaxy A71 is using a Super AMOLED panel while the X2 is using an IPS panel that can run 120HZ and has HDR 10 support. Depending on which you value more, we’re giving this category a tie.

While both phones have a 64MP primary shooter, the Galaxy A71 has a higher resolution ultrawide (12MP vs. the X2’s 8MP), macro (5MP vs. 2MP), and depth (5MP vs. 2MP) cameras. Its front camera also has a higher resolution of 32MP (vs. 20MP), although it does lack the depth sensor which the Poco X2 possesses. While we are giving the win to the Samsung Galaxy A71, it’s important to note that high MP count doesn’t necessarily mean it can produce better photos.

In terms of performance, both the Poco X2 and the Galaxy A71 are using a Snapdragon 730G chipset. Both devices are also equipped with either 6GB or 8GB of RAM (though the local version of the A71 only comes with 8) and up to 128GB of UFS 2.1 memory. If you’re a power user that requires more storage, then you’d be delighted to know that the Galaxy A71 has a dedicated MicroSD slot that can be expanded up to 512GB. The Poco X2, on the other hand, shares its expandable storage slot with the second SIM slot. Where the Poco X2 shines, however, is its use of liquid cooling. By allowing the device to transfer heat more effectively, it should be able to maintain higher operating clock speeds. We’re giving the win to the Poco X2 due to its inclusion of liquid cooling. Although should our (or other reputable reviewer’s) testing prove its implementation ineffective, then we’ll be giving both devices a tie.

Lastly, we have the prices of each device. It is important to note that the Poco X2 has only been launched in India, and prices shown are based on the exchange rate as of the time of writing. We’ll update this article when the Poco X2 officially launches in the country. Here are the prices:

For the same storage configuration, the Galaxy A71 is 50% more expensive than the Poco X2.  If you have a lower budget, you could also take advantage of the smaller memory configurations of the Poco X2.

Overall, the Poco X2 packs a lot more features at a lower price point. It has a 120Hz, HDR 10 capable display, NFC and IR blaster, and liquid cooling which are all not present in the Galaxy A71. However, if you value using an AMOLED display, better cameras, and a dedicated MicroSD slot more, then the Galaxy A71 would be the better choice for you. As for availability, the Samsung Galaxy A71 is now open for pre-order and will be available for purchase starting February 15. The Poco X2, on the other hand, is yet to be released in the country.