Last year’s Samsung Galaxy A71 certainly attracted a lot of attention, and it was by far one of the best mid-range smartphones that the brand released. Now that we got our hands on the upgraded Galaxy A72, we sure have high expectations. But with the Samsung Galaxy A50 5G around, did Samsung play it safe this time? Let’s find out. Similar to its sibling the Galaxy A52, the Samsung Galaxy A72 sports a playful minimalistic matte pastel style that honestly reminds me of Legos. I don’t know if there’s a direct reference to Lego as its color variants all have the word “awesome” in them (insert The Lego Movie Everything is Awesome song). 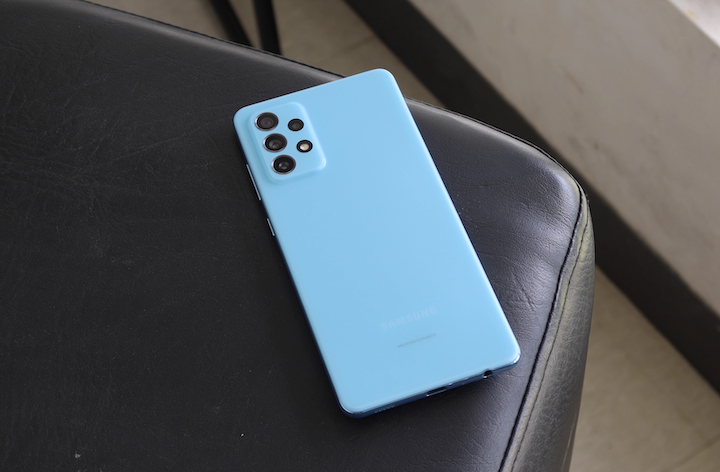 The one we have is obviously in Awesome Blue, and there’s also Awesome Black, Awesome White, and Awesome Violet that looks aesthetically pleasing. It has a plastic build, which is fine since it still looks robust and it’s already hefty enough weighing 203g. This is really for those who are into large phones. 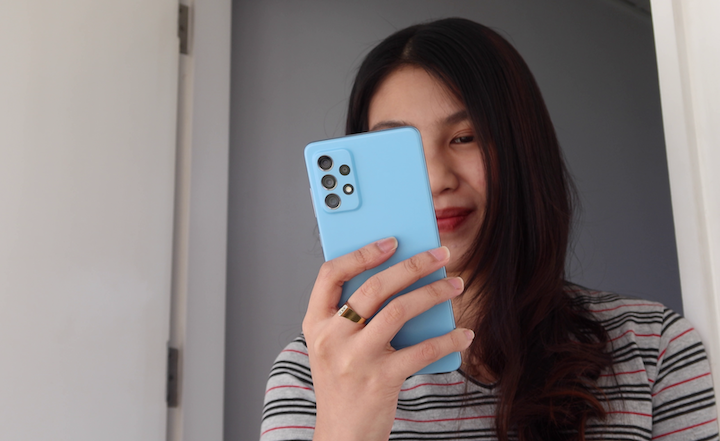 Its quadruple rear camera setup is situated inside a rectangular module that seamlessly blends in with the overall simple rear design. Although, it still has a small bump that you can minimize by fitting the included jelly case. There’s also a subtle Samsung branding at the bottom part of the rear. 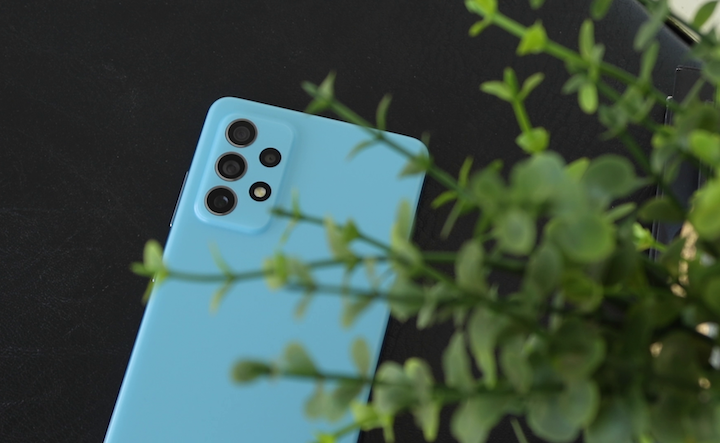 Upfront, the A72 has a large Super AMOLED Plus display with slim bezels, a hole-punch module for its front camera, and an in-display fingerprint scanner. 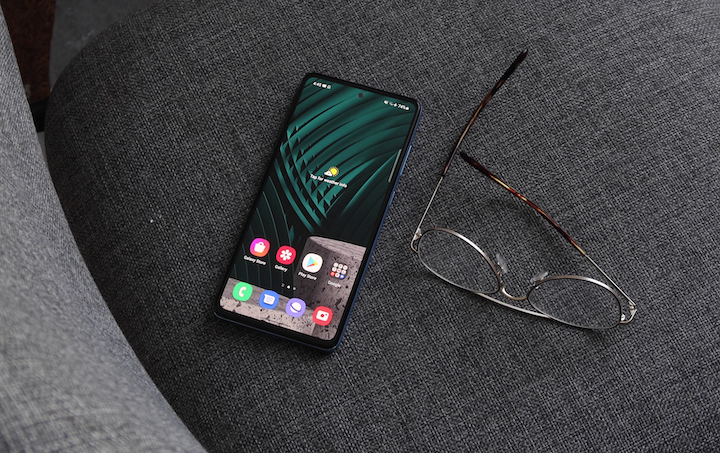 There’s nothing on the left side, but on the right are all the buttons: the power button and the volume rocker that are all easy to reach. However, people with smaller hands might find it a hassle to press one-handed. 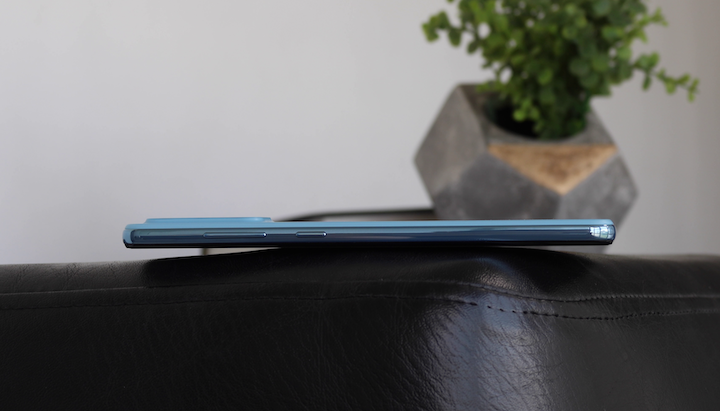 Up top is a microphone together with the hybrid SIM tray for either 2 nano-SIM cards or 1 nano SIM plus a microSD card for up to 1TB. 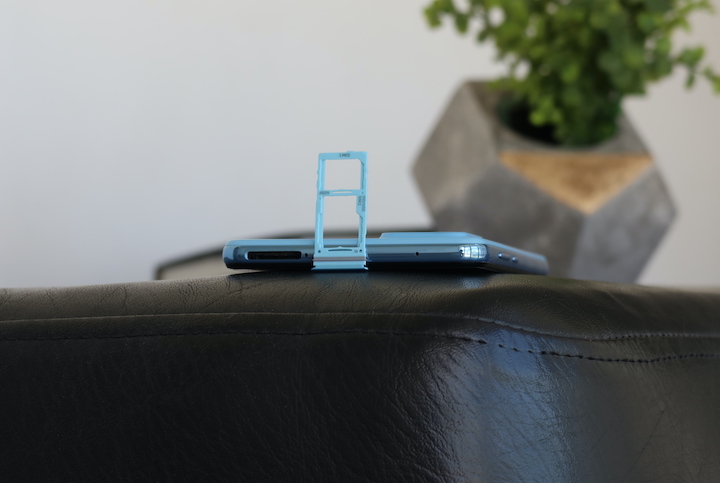 Heading over to the bottom, we get a 3.5mm headphone jack, a noise-canceling microphone, the USB Type-C port, and a downward-firing stereo speaker. 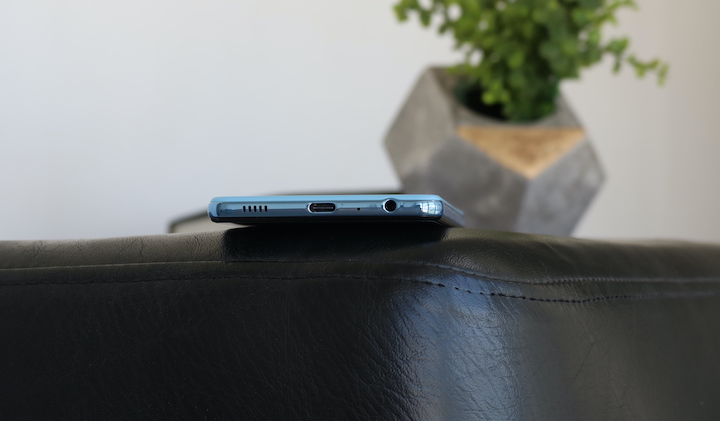 Overall the A72’s design looks absolutely fun and clean. I like that it doesn’t attract many fingerprint smudges, and did I mention that it’s IP67 water and dust resistance too? Well, yes it is, and it’s something that we’ve been wanting to have in mid-range phones now. 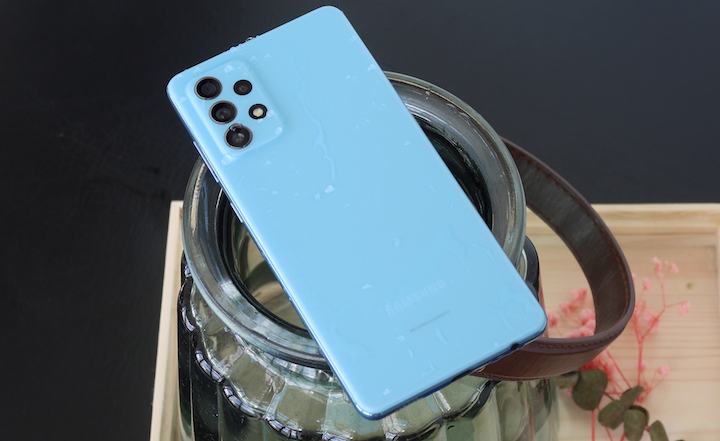 Although take note that it’s not completely waterproof. This means that it can handle being submerged up to 1m for 30 minutes. So it’s safe to say you can take this to the shower with you.

Basically, the Galaxy A72 has a similar screen to last year’s A71, except now it features a 90Hz refresh rate option. We get a massive 6.7-inch Infinity-O Super AMOLED Plus display, coupled with Corning Gorilla Glass for protection. 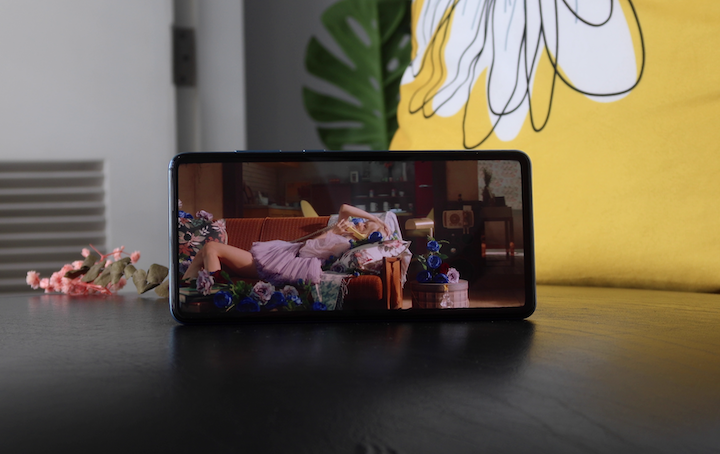 It has a resolution of 2340 x 1080px and a pixel density of 394ppi, giving us vibrant colors, deep blacks, and nice viewing angles. Of course, we get a smooth scrolling experience with the 90Hz refresh rate that you can easily switch to the 60Hz automatic refresh rate if you want to save more battery life. The screen can also go up to a total brightness of a surprising 800nits, something that we mostly see in flagship devices. 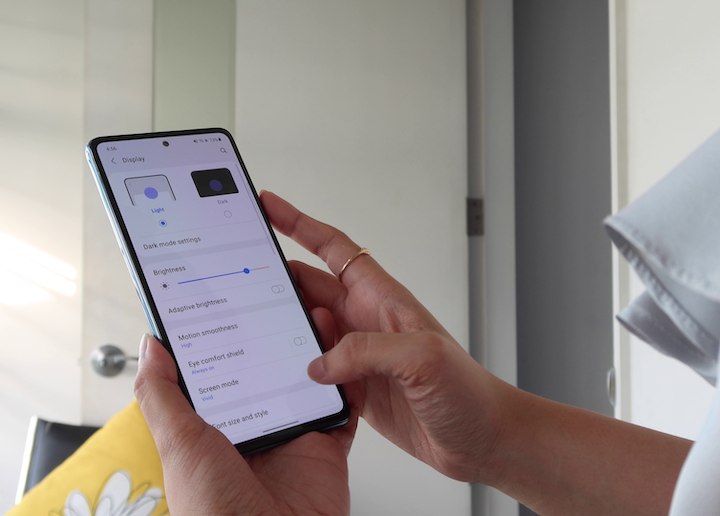 Audio-wise, its down-firing stereo speaker and earpiece produce averagely good quality. It can fill a room and can get loud enough without getting too distorted when the volume is set to maximum. Mids and highs are present, but the lows are pretty much absent. Either way, you can always take advantage of its headphone port and Dolby Atmos customization features for better audio quality.

Focusing on cameras now, at the back we get a quad-cam setup composed of a 64MP main, a 12MP ultrawide, an 8MP telephoto lens, and the smallest one being the 5MP Macro shooter right above the LED Flash. For selfies, we get the same 32MP front camera as the A71. 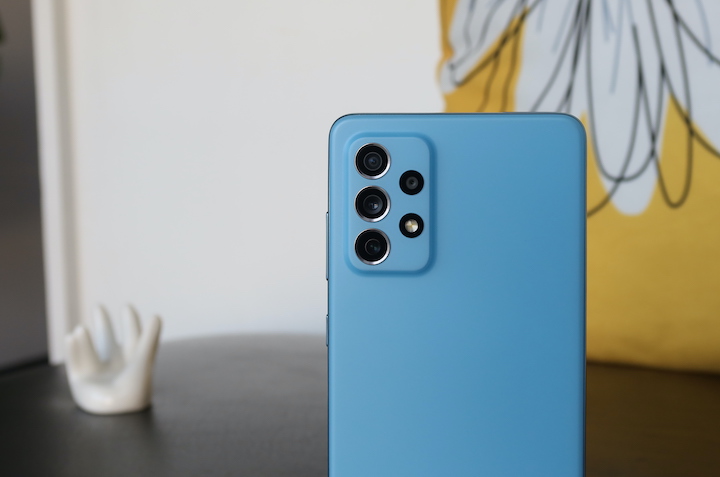 Quality-wise, the rear camera takes decent photos with sharp details and good colors. However, it can be inconsistent sometimes with the color reproduction as seen in these photos of some mangoes. The scene optimizer was turned off here and I only tilted the phone a little lower, and the colors changed immediately. 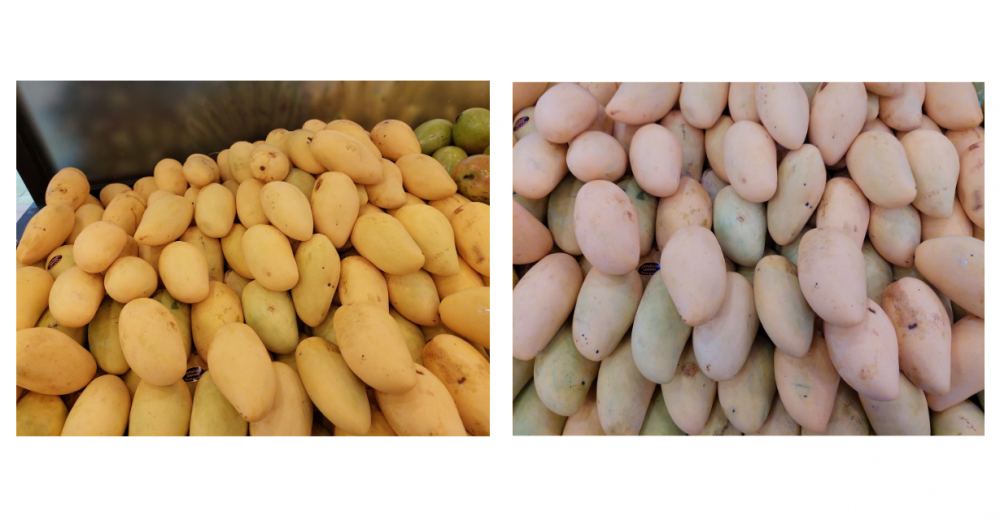 Thankfully, this isn’t always the case since we still often get vibrant shots. We always like having an ultra-wide mode, and for the A72’s case, it looks good with some slight fisheye effect at times and the colors tend to appear a little darker than the primary camera. You can also zoom in from 3x to 10x, 20x, and up to 30x with okay quality with a lot of contrast.

Portrait mode on the other hand works very well with on-point subject-background separation that can be adjusted in post. You can also try the Food Mode that’s dedicated to food photography, and it gives off a nice depth effect with subjects placed in the middle of the frame.

For night photography, when we use its dedicated night mode, it didn’t really show much difference except that we get sharper details and lesser noise.

As for selfies, its 32MP front camera is quite impressive. Photos look natural under ample lighting, with good colors and decent details. Although, take a few extra shots as it can be blurry sometimes. You can take advantage of taking wide selfies as well which still produces good colors.


For other features, there’s Samsung’s own Single Take mode, Pro, Macro, Panorama, AR Doodle, Super Slow-Mo, Hyperlapse, and the new Fun Mode which is a partnership with Snapchat so you get those instant quirky features. It does require an internet connection to be used.

Checking out videos, you can shoot up to 4k at 30fps, but the Super Steady stabilization is only usable for 1080p at 30fps. You can use the Pro Video though if you want more control for specific subjects and scenarios.

The A72 runs on Android 11 skinned with the latest One UI 3.1. As most of you may know, we’re fond of One UI. It’s dynamic, familiar, and packs a lot of quirky customization features. 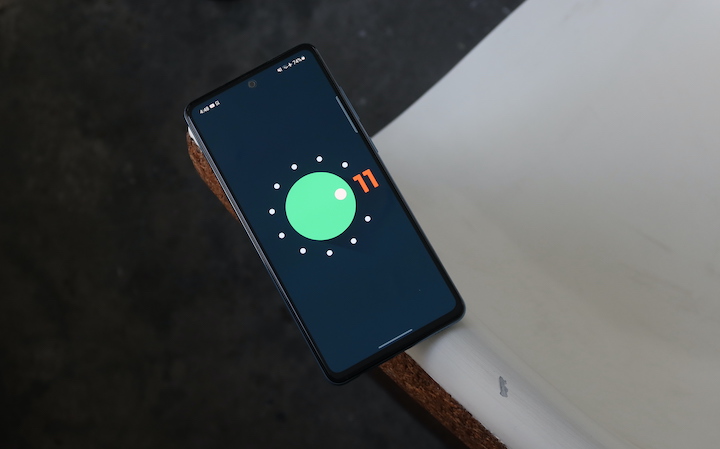 As usual, you get the option to use an app drawer as well as navigate with gestures or the usual buttons, whichever you prefer. There aren’t many pre-installed apps besides Google and Samsung’s own apps, which should be fine. 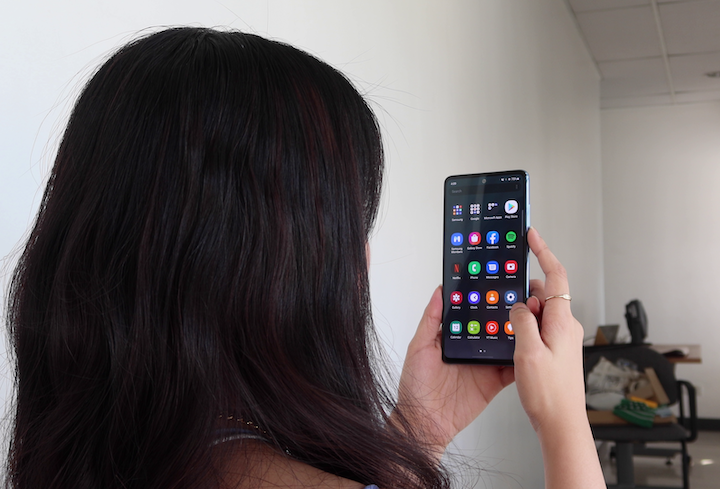 Out of its 256GB of internal storage, we get a usable 220GB that can be expanded via a microSD card up to 1TB. Do note though that it has a hybrid card tray.

As for performance, the Galaxy A72 is armed with a Qualcomm Snapdragon 720G octa-core CPU coupled with an Adreno 618 GPU and 8GB of RAM. Interestingly it’s the same configuration as the lower Galaxy A52, then there’s the A52 5G variant with a higher Snapdragon 750G processor. This honestly places the A72 in a risky spot for savvy consumers. 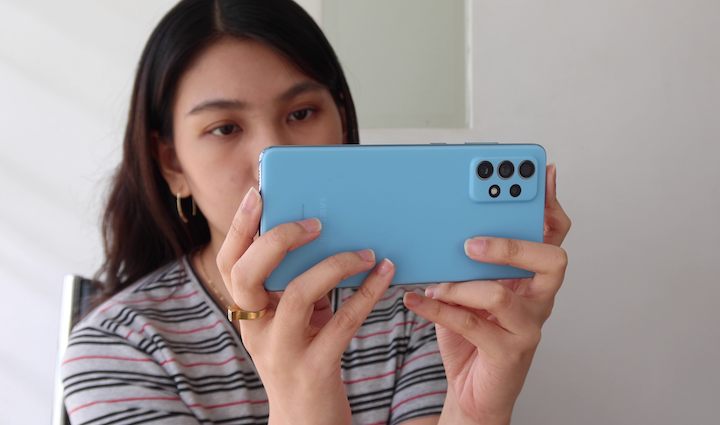 We ran it through our standard benchmarks, and here are the results we got:

It runs smoothly for basic tasks such as video streaming, web, and social media browsing, messaging, and even taking pictures. For gaming, it can run heavy titles such as PUBG Mobile, Genshin Impact, and Asphalt 9 steadily with some occasional lags or frame drops every now and then 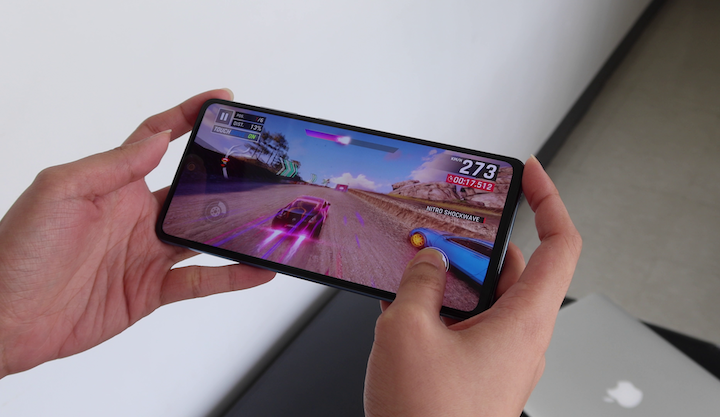 For biometrics, you can unlock the device via the in-display fingerprint scanner and face unlock. The face unlock works pretty well, while the fingerprint scanner requires you to press a few seconds longer for it to unlock. Its position is also leaning more towards the bottom of the screen so you’ll have to adjust your finger lower oftentimes. 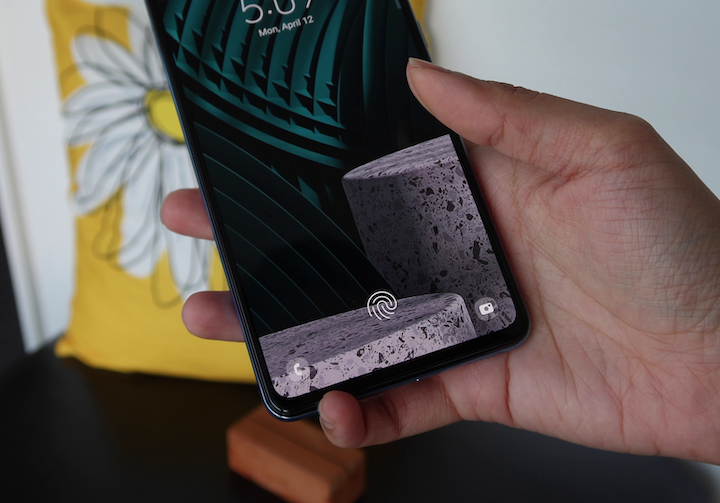 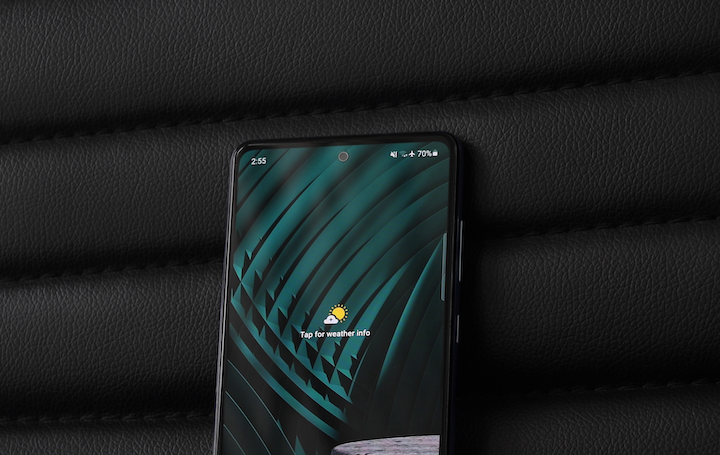 Keeping this phone running is a whopping 5000mAh battery with 25W fast charging, and yes, it does come with an adapter. Its capacity is 500mAh more than its predecessor, so expect to obtain a few more hours from this one. 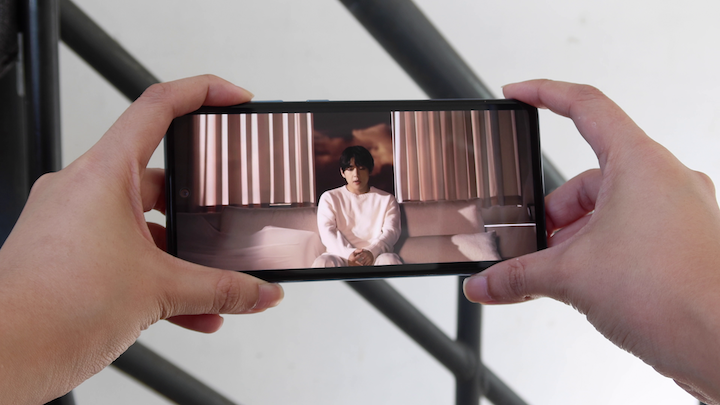 When we ran it through the PC Mark’s battery test, the A72 completed 14 hours and 27 minutes. Meanwhile, in our standard video loop test which entails playing a 1080p video on loop at 50% brightness and volume, airplane mode turned on, and earphones plugged in, it yielded a very good 24 hours and 48 minutes.

So the A72 can last you a whole day of moderate use and even with some slight gaming. Charging, on the other hand, takes around an hour and 30 minutes from 0 to 100%.

Now that we’ve talked about almost everything, let’s finally focus on price. The Samsung Galaxy A72 is officially available for PHP 23,990. And as I’ve mentioned, it’s quite in a risky spot because first, it only got minimal improvements from its predecessor the A71, then there’s the competition in its price range with other phones offering better performance and cameras. It does however give the advantage of being a familiar Samsung device with an attractive design and large battery capacity. I’d also like to point out that it’s outshined by the Samsung Galaxy A52 5G which almost has similar specs and price to the A72. The A52 5G may have a smaller battery capacity and overall size, but it’s got a 120Hz refresh rate, better hardware, and of course, 5G connectivity. So I guess Samsung really played it safe for the Galaxy A72 this year. But if you highly prefer large phones with a telephoto camera and a bigger battery bundled with a 25W charger, then definitely consider this. Now I’m gonna pass the question to you. What do you think of this Samsung Galaxy A72? Let us know in the comments.