Samsung Galaxy M32 vs Huawei nova 8i: Which smartphone to get under PHP 14K?

Samsung Galaxy M32 vs Huawei nova 8i: Which smartphone to get under PHP 14K?

Samsung has finally brought its latest Galaxy M32 smartphone to the Philippines. Priced under PHP 14K, it sports a MediaTek Helio G80 SoC, quad rear cameras, and a whopping 6,000mAh battery with a 25W fast charge.

On the flip side, Huawei has also recently unveiled a smartphone under a similar price tag: the nova 8i equipped with a Qualcomm Snapdragon 662 processor, quad rear cameras, and a 4,300mAh battery w/ 66W Huawei SuperCharge. So which is more worthy of getting under PHP 14K budget? Let’s find out! 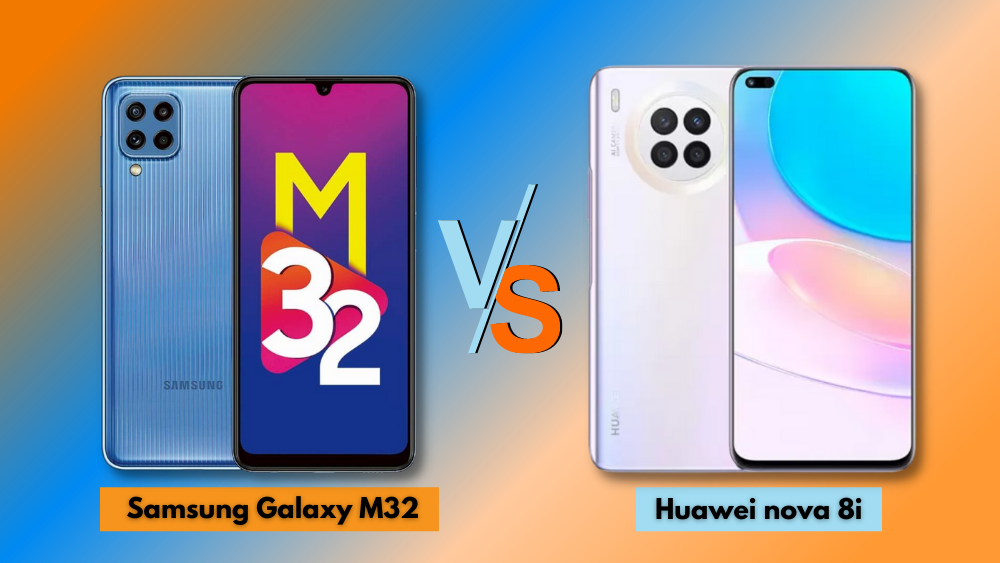 The Galaxy M32 and nova 8i come with an FHD+ display. The former sports a 6.4-inch Super AMOLED, which provides deep blacks and punchier colors, while the latter has a slightly larger 6.67-inch FHD+ IPS TFT LCD, which produces more natural colors.

Nevertheless, it is also worth noting that the nova 8i boasts Huawei’s Edgeless display with ultra-thin bezels that some users would appreciate.

However, the Galaxy M32 got a 90Hz refresh rate for a buttery-smooth experience for applications and games. With a high refresh rate, scrolling through social media, long documents, or news feeds is less strenuous on the eyes because of the extra perceived fluidity.

What’s more, the Galaxy M32 is also equipped with Corning Gorilla Glass 5 for protection against damage from drops. According to Corning, Gorilla Glass 5 survives up to 1.2-meter waist-high drops onto hard, rough surfaces.

Powering the Galaxy M32 is a MediaTek G80 processor paired with Mali-G52 MC2 GPU, while the nova 8i is equipped with a Qualcomm Snapdragon 662 paired with Adreno 610 GPU.

When looking at the smartphones’ AnTuTu scores on Kimovil, the Galaxy M32 bettered its opponent with a score of 208,000, while the nova 8i scored 184,000. However, note that we can only determine the extent of their performance and thermals once we have both units for review.

Both Galaxy M32 and Galaxy A32 come with an 8GB + 128GB configuration. Nonetheless, the Galaxy M32 is advantageous as it features a microSD card slot for storage expansion up to 1TB.

Upfront, the Galaxy M32 has a higher resolution 20MP camera compared to the nova 8i’s 16MP.

Take note, though, that these numbers don’t always equate to quality. We will provide proof of which camera is better once we test both units for comparison.

As for connectivity, the two are powered with the same specs, such as 4G LTE, WiFi 802.11 a/b/g/n/ac, Bluetooth 5.0, and dual-SIM. For security, however, both smartphones sport side-mounted fingerprint scanners. Both smartphones also come with a USB Type-C port and a 3.5mm audio jack.

The Galaxy M32, though, advances in the OS version as it runs under Android 11 with Google Mobile Services.

Despite being slightly cheaper, the Samsung Galaxy M32 has a long list of advantages over the Huawei nova 8i. Saving you PHP 509, it also grants you the perks of a better display, expandable storage, a higher front camera resolution for selfies, GMS, and a larger battery.

The only thing you’ll be missing from the Huawei nova 8i, though, is its 66W fast charging support, which isn’t much of a big deal if you’ve got a massive battery capacity.