We’ve got some hands-on time with the newly announced Samsung Galaxy S3 and so far we’re impressed with the design, construction, performance and the capabilities of the camera. The Galaxy S3 also features the new Exynos 4 Quad processor and an optional LTE chip for super fast connectivity.

Samsung did not disappoint us when they revealed the successor to the popular Galaxy S2. While expectations were very high, the Galaxy S3 i9300 managed to introduce more features on top of the upgraded hardware configuration. 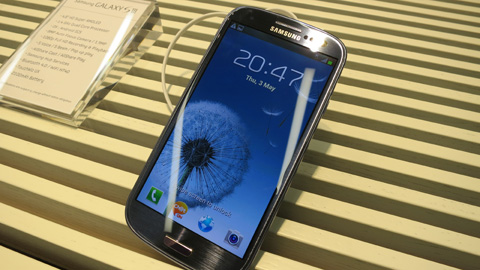 Powering the Galaxy S3 is the Exynos 4 Quad processor which offers at least twice the processing power yet running on lower power consumption.

On paper, the hardware specifications of the Galaxy S3 looks impressive. Samsung did not say if they will release different variants in other regions but all indication says it might be the same model globally (except perhaps for the ones with LTE).

The Exynos 4 Quad has 4 cores running at a peak speed of 1.4GHz each. That’s twice the computing power of the Galaxy Note.

Samsung gave the Galaxy S3 a large-capacity battery to make up for the possibly juice-guzzling handset. The 2,100mAh Li-Ion battery is so far among the highest we’ve seen in any Samsung handset, closing in on the 2,500mAh on the Galaxy Note.

The size of the S3 is almost similar to that of the Galaxy Nexus despite the former having a slightly bigger screen. This is because if you look at the bezel of the S3, it is narrower making more room for a bigger display on the same frame.

The body has that brushed-metal finish (Samsung calls it hyper-glazed) which gives it that metallic look and feel despite being actually made of polycarbonate material (the white variant has a glossy finish though). At 8.6mm, you can really feel the slim profile of the body. 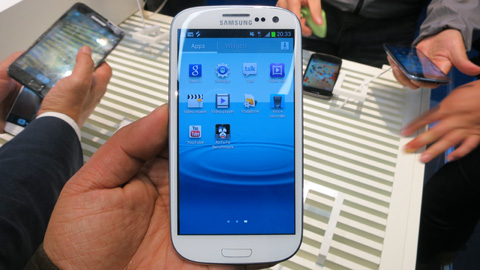 The 4.8-inch screen uses a Super AMOLED display with HD resolution (that’s why they refer to it as Super HD AMOLED) of 1280×720 pixels giving the S3 a 306ppi pixel density which is already within the realms of Retina Display. 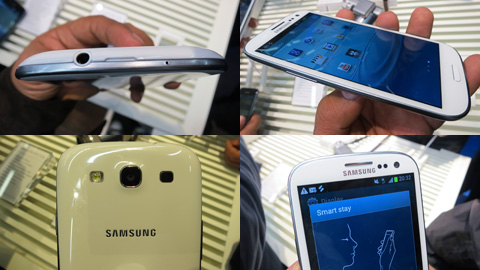 The 8MP camera of the S3 might not be any bigger than the one on the Galaxy Note but the photos and videos it took are impressive, even in low light conditions. We’re still curious how it will fare in the outdoors with natural light.

What is noteworthy is that the shooter can take really fast photos at 3.3 frames per second (20fps on burst). Our initial tests so far left us impressed (feels like entry-level dSLR speeds). The internal storage of the S3 will go up to 64GB but with the microSD card, you can still add another 64GB for a total of 128GB. Also, we noticed that the SIM card slot at the back indicates the S3 wil be using a micro-SIM.

We did a number of synthetic benchmarks (Quadrant, Antutu, Nenamark 2) and the results were thru the roof for the Exynos 4 Quad processor. Check out the initial results here.

Integrated features such as eye recognition, face and voice recognition looks impressive during the presentation but we were unable to test it ourselves because of the noise of the crowd in the exhibition hall.

Samsung Philippines has told us that the Philippine launch of the Galaxy S3 is slated on either May 22 or May 24. They did not share any pricing information but we speculated that the 16GB might go for Php29,990 while the 64GB could go for Php35,990. Of course, our telcos (Smart and Globe) might also be fighting to get first dibs on the handset and offer it with a plan.