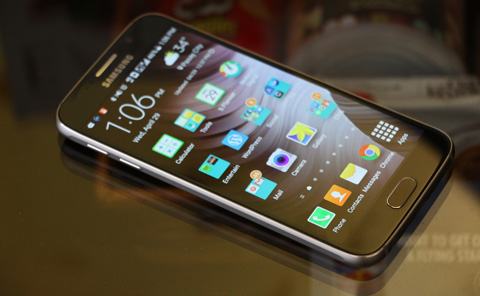 Technically speaking, Samsung is releasing the Galaxy S6 Duos in the Philippines. This is the dual-SIM version of the Galaxy S6, a move that signifies the inclination of Filipino smartphone consumers (the international version is still single SIM).

Author’s Note: For the purpose of this review, we purchased the Galaxy S6 during the launch date and got an original wireless charger for free.

Samsung went all out with the Galaxy S6, putting solid aluminum and glass together to build a premium and elegant construction. 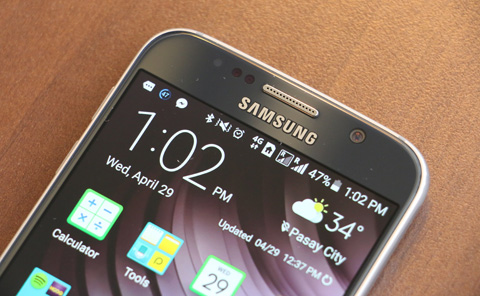 The Galaxy S6 combines the shape and form of the Galaxy S4, the glass on glass treatment of the Xperia Z3 and the refined aluminum chassis of the iPhone 6. Samsung is perhaps the first one to employ Gorilla Glass 4 at the front and back of the device. This makes the Galaxy S6 tougher and more scratch resistant. 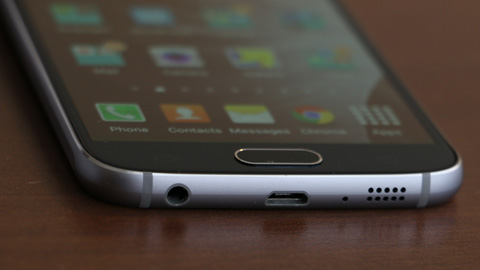 The rear camera slightly protrudes away from the flat glass back panel. Like the 5MP front-facing camera which has an f1.9 aperture, the 16-megapixel rear camera also inherits the same f1.9 feature. There’s also the large “Duos” label at the back, indicating that it’s the dual-SIM version. The power button is on the right side together with the SIM slot, the volume controls are on the left side while the 3.5mm audio port, microUSB port and speakers are at the bottom end.

Samsung has finally addressed long-time critics about the Galaxy S series not using premium materials like metal or glass.

With a 5.1 inch display, it’s still of the right size for a comfortable and firm grip, even feels better to hold than the Z3. While we’ve already seen quad HD displays in the past (like in the LG G3, OPPO Find 7 or the Note 4 and Note Edge), the Galaxy S6 packs the highest pixel density we’ve ever seen — 577ppi. 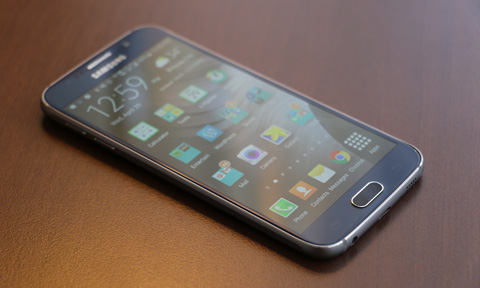 We think it’s already an overkill and Samsung is merely bragging that they could do it. But come to think of it, what would the critics think if the next flagship device only has a full HD display? Obviously, quad HD is in order.

More pixels will always be a welcome addition but it should not drastically affect performance (like in the G3) and battery life.

In the case of the Galaxy S6, display quality is superb. The screen is very crisp and very sharp, colors are vibrant and pops out. With that amount of pixels though, it’s no longer distinguishable to the naked eye so we found no remarkable difference between this and other displays before it (like in the Note 4, Note Edge and even the G3 or S5). On the other hand, we’re slowly noticing that 5.1 inches no longer cut it. The screen real estate felt small for a flagship device. Perhaps we’ve gotten accustomed to size ranges between 5.2 and 5.7 in the past year that anything below that is noticeably small. Perhaps, Samsung could have pushed somewhere between 5.3 to 5.5, trimmed down the bezels and screen-to-body ratio but still end up with a gross body size that’s as comfortable to the hands and don’t look like a phablet.

The Galaxy S5 will come with Android 5.0.2 Lollipop right out of the box but with a heavily reduced TouchWiz UI which means less bloatware. The unit we has was very snappy (similar to the Note 4) and the graphics are vibrant and very sharp, considering that it comes with a quad-HD resolution or a pixel density of 577ppi. The HTC Sense UI has a maximum of 6 homescreens. The infinite homescreens (we stopped counting after 50) of the ToucWiz could be a pleasant surprise to those obsessively managing their apps and widgets. 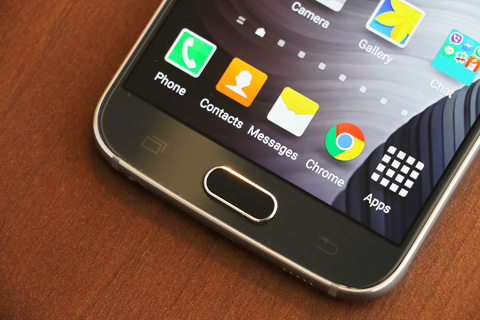 There are also a number of native themes you can choose from and many more from the Samsung app store. The collection is not as extensive as Xiaomi’s MIUI Theme Store but they’re all quality themes.

With S Health, you can also measure your heart beat by placing your index finger over the sensor at the back where the LED flash is located. This is the same feature first introduced in the Galaxy S5 along with the built-in pedometer or step counter.

There seems to be a bug in the app or memory management and we noticed some recent apps just randomly stop or gets killed off. Samsung has acknowledged this bug and is working on a fix for it.

Samsung have always equipped their flagship smartphones with very good optics as far back as the Galaxy S2 and improved it in every iteration. 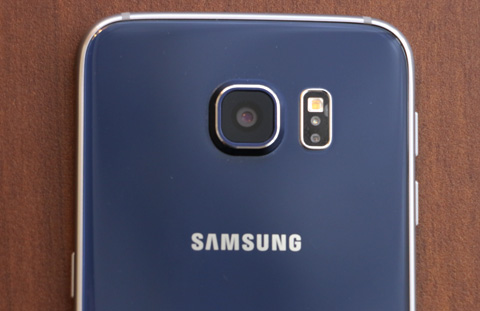 The Galaxy S6 is pushing more pixels with a 16-megapixel sensor and letting in more light with a wide aperture of f1.9, one of the largest in any smartphone camera (the LG G4 has f1.8). You can learn more about how aperture affects your photos here. 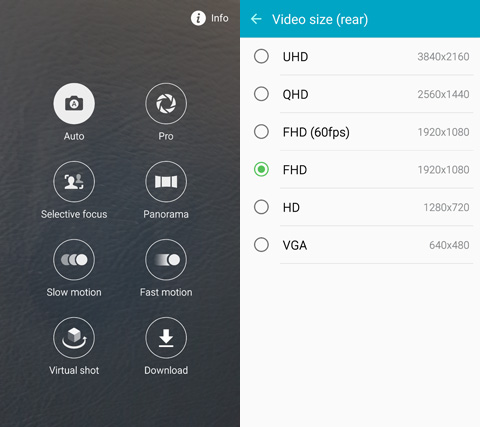 The camera launches pretty quickly at just 0.7 seconds and works pretty well even in low-light conditions. You can check the photo gallery below for sample photos taken with the S6.

The rear camera can record up to UHD (3840×2160) or 4K resolution videos or do 60fps at 1080p. Slow Motion is only available at 720p but takes up to 240 frames per second. When set up to record SloMo, it takes a few seconds at regular speed then records 240fps and returns back to normal speed for a couple seconds before it stops (same mechanism as the iPhone 6 Plus). 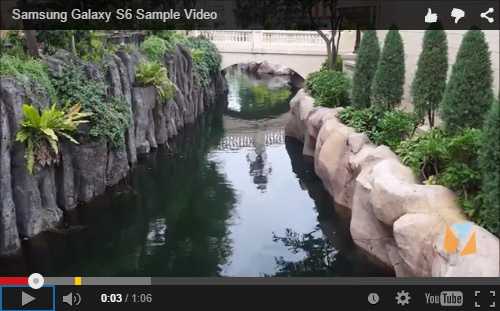 The S6 gives you a lot of options to maximize use of the both front and rear cameras. Since the handset does not have a dedicated camera shutter button, a shortcut is created by double-tapping the Home button. 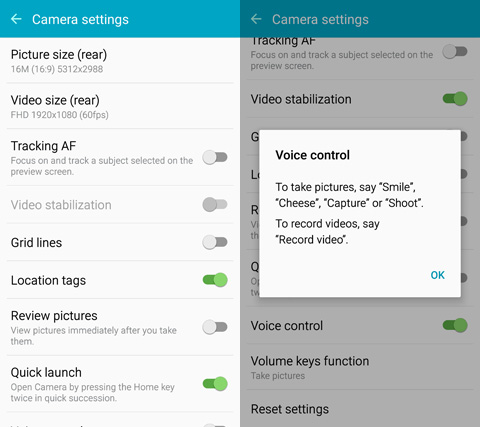 The 5MP front facing camera can take videos up to QHD resolution (2560×1440 pixels) where most other smartphones would only offer full HD resolution.

Samsung used to deploy two types of chips for their flagship — one of their own, the Exynos; and another by Qualcomm which is normally the latest Snapdragon. This is because Snapdragon chips generally performed better and it comes with embedded LTE radio. Samsung then distribute their own Exynos-powered handsets in regions where there is no existing LTE networks, thereby negating the need for LTE. 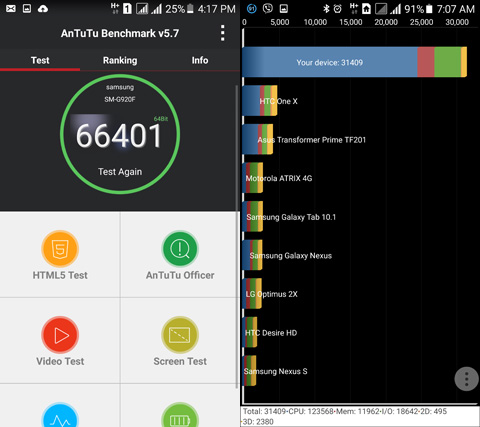 This time however, they dropped Qualcomm completely in favor of their latest Exynos 7 octa. This is partly due to the reported overheating issues of Snapdragon 810. Samsung used their own LTE module with the S6 Duos, but unlike Qualcomm which have native LTE support for dual-LTE, the Exynos chip only had one companion LTE module. This is the reason why only the 1st SIM card slot has LTE and the second one only has HSPA+.

Nevertheless, this predicament proved to be a blessing in disguise for Samsung as Exynos 7 scored very high in almost all synthetic benchmark test out there.

We observed a sufficient amount of heat running across the metal frame around the sides even during moderate tasks like downloading large apps or multi-window browsing (We recorded a maximum core temperature of 41.5 Celcius). The glass panel at the back provided ample insulation from the heat but sometimes, you can really feel it creep beyond comfortable levels. 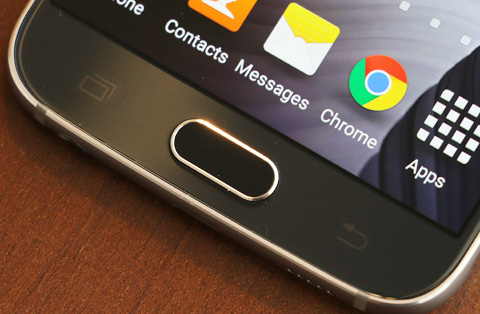 The fingerprint scanner has improved, coming from the Galaxy S5, and works as accurate as the one on the iPhone 6. Based on random testing, we would get positive scans in the range of 7 to 8 out of 10 consecutive attempts. You can only register a maximum of 4 different fingerprints though. While the dual SIM is a welcome feature, it would have made sense if Samsung used the extra room for the microSD card slot instead. Samsung’s alleged reason about external storage contributing to the lag of the phone has not been noticed in previous handsets, including the Note 4, so the trade-off does not make practical sense.

Or, they could have made the second SIM card slot compatible with a microSD card. We’ve seen this implemented before in the Acer Liquid Jade and the Huawei Mate 7 where the microSD card slot can accommodate a nanoSIM.

We noticed some very odd behavior in the dual SIM functionality. 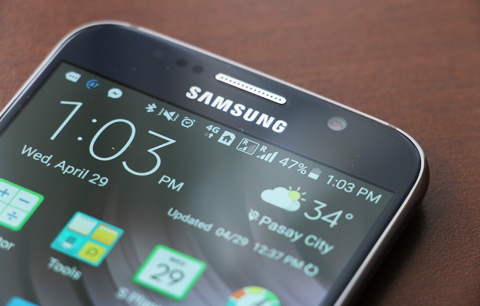 The primary LTE SIM seems to have weak or fluctuating cellular signal half the time, regardless of the carrier used.

When using two SIM cards (we used Globe and Smart at the same time), the primary card which supports LTE behaves erratically and signal would weaken or disappear numerous times in any single location. We also experience this while roaming in other countries and connected to different networks, ruling out the possibility that it’s telco related.

The signal bar would drop from full to 1 or zero bars several times. We ran a network signal app to monitor signal strenght and found the connections would drop significantly. 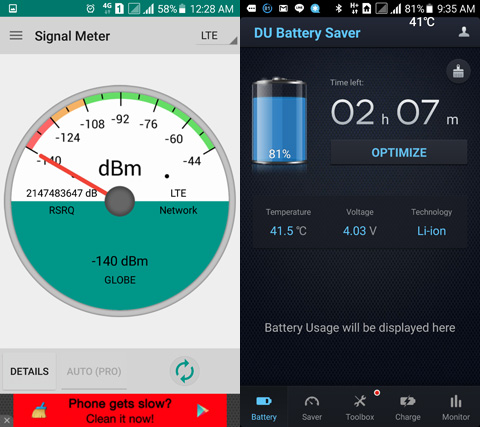 To double-check, we used chat applications like Voxer which requires persistent connection and our messages would be stuck at “Sending” for minutes.

We consulted several people and was informed Lollipop has that small problem with dual SIM handsets. However, when we used the same 2 SIM cards on a Zenfone 2, we did not experience the same erratic signal fluctuations.

We also encountered some issues with Call Barring when several people complained they could not reach me. When activating the Dual Active SIM feature, we always get an error or failed response.

This is the first time we’ve encountered these issues in a dual-SIM environment.

As for battery life, the Galaxy S6 manages about a full day’s worth of moderate usage with WiFi or 3G on. We ran our standard battery benchmark and got between 10.5 to 11.5 hours on a single full charge playing an HD video in a continuous loop at 50% brightness and zero volume. This is above average compared to most other flagship smartphones we tested. 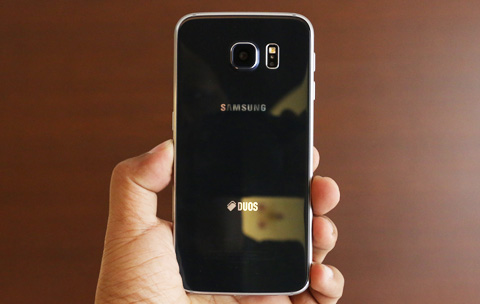 With the Battery Test of PCMark, the handset was rated at 8 hours, 53 minutes.

Wireless charging is now incorporated into the Galaxy S6 and is compatible will all Qi chargers in the market. (Samsung is also giving free wireless chargers to early adopters.)

For a couple of times, we encountered some erratic behavior where battery drains pretty quickly (like a drop of 3% in less than 5 minutes) even if the phone is in idle and mobile internet is on. What we’d do when that happens is either turn off mobile internet or reboot the phone.

The Galaxy S6 may have lost its expandable memory and removable battery, an advantage it enjoyed over the equivalent generation of Apple’s iPhone, but it is a compromise that still had a net positive effect by virtue of a newly minted look and premium build. 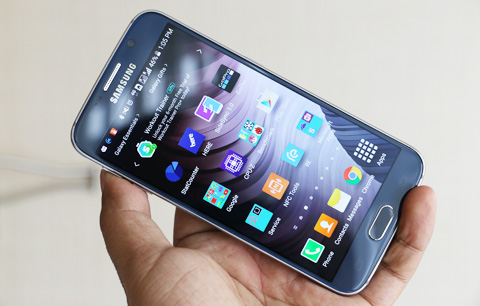 Samsung may have learned this the hard and painful way and though it may not really convince longtime iPhone users to switch back, many will now regard the Galaxy S6 as the iPhone of Androids. It’s a funny and ironic euphemism but, in respect, it is a coveted perception. Never mind that a lot of the design ideas are obviously inspired by the iPhone 6. Imitation is another form of flattery.

Samsung has every right to be proud of the Galaxy S6. They have already seen how their customers loved the premium build of the Note 4. The S6 is a huge step in the right direction, something that will certainly change the perception of critics and customers alike. 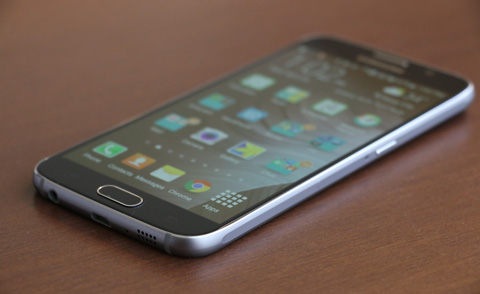 For the first time in many years, Samsung has a handset that is worthy to be called a proper flagship. The last time we saw something as impressive and equally threatening as the Galaxy S6 was with the Galaxy S2. It took quite a while but at least they’ve finally redeemed themselves.