One of the key elements of photography is working with light and getting just the right amount of it so your pictures end up visually appealing. In this segment, we’ll give you an introduction on exposure and how each of its facets affects your composition.

By definition, Exposure is the amount of light (natural or artificial) that a camera’s sensor (or film) is exposed to. Therefore, depending on how much light was allowed to hit the sensor, an image can be underexposed (dark) or overexposed (bright). 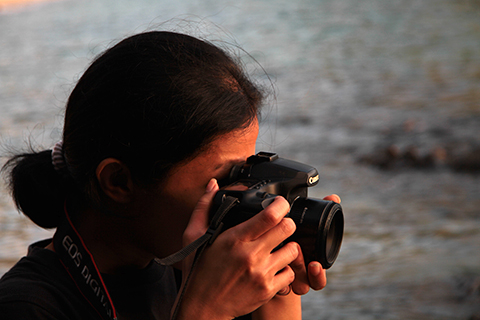 Exposure can be altered to meet the envisioned outcome of the user. This is done by adjusting key photography elements whether in-camera (ISO and Shutter speed) or off-camera (Aperture). We’ll discuss each of these aspects as we go along, starting with Aperture.

In layman’s term, Aperture is described as the opening of the lens mechanically controlled by several blades which restricts the amount of light that hits the sensor. It works similarly to our eye’s pupil; it dilates or contracts to compensate for the intensity of the light. Aperture is measured in f-stop which is somewhat confusing particularly to those who are starting out in photography. A lower number (ex. f/1.8) denotes a larger lens opening which subjects the lens (and the sensor in the process) to more light. On the other hand, a higher number like f/8 translates to a smaller opening.

Depth of field is also a topic of discussion when dealing with aperture. Wikipedia defines it as “the distance between the nearest and farthest objects in a scene that appears acceptably sharp in an image.” In context, DOF deals with the amount of emphasis that a given focus point has in the image as opposed to the foreground/background. 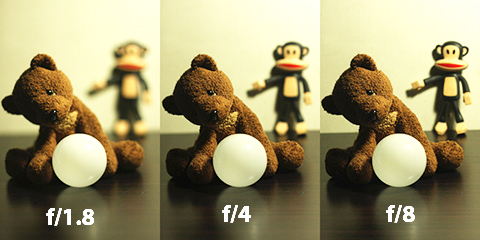 DOF is categorized in to two; shallow and deep. The former is achieved by either shooting at a wider aperture or by moving the subject as far away as possible from the background. As a result, you’re drawing more emphasis to the main subject by blurring background/foreground.

Conversely, if you want the other portions of the image to be as defined as the subject as possible, you can either move the main subject (Teddy) closer to the background (Paul Frank) or shoot at a smaller aperture like what we did on the right-most picture.

If Aperture controls how much light comes in, then Shutter Speed dictates the amount of time that the film or sensor is exposed to the light. Shutter speed is measure in seconds which correlates to the time it takes for the whole cycle (opening and closing of the shutter) to complete. In practice, the sensor/film records all the light, as well as movements, from the time that the shutter opens until it closes. This means that by shooting at faster shutter speed (half a second or faster) you’re actually letting in less light as opposed to having the shutter open for a second or longer. 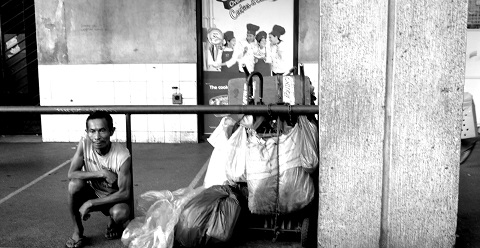 Oftentimes, shutter speed is set to less than a second in order to freeze a moment and/or avoid motion blur caused by either unsteady hands during handheld shooting or moving subjects. This “motion blur” is evident on the image above that I took while I was on a moving bus.

There are, however, some instances where a slower shutter speed is required to produce the desired result (as seen in the image below) or what is commonly called as long exposure. With the help of a tripod and an ND Filter, I was able to capture a flowing stream and made the water look creamy or cloud-like. 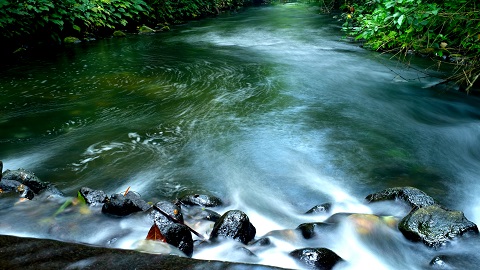 ISO
Lastly we have ISO, or previously known as DIN and/or ASA back in the days of film cameras. In a nutshell, ISO deals with the sensitivity of sensor or film to light.

Before the advent of digital cameras, the ISO cannot be adjusted in the camera; rather it’s pre-set on the film that you’re using. Fortunately, we won’t have to deal with that anymore as digital cameras are now equipped with various ISO presets that are readily available at your disposal. 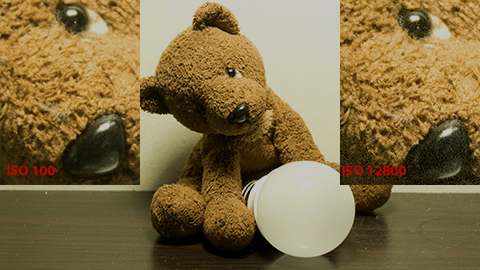 However, the drawback of shooting at a higher ISO value is that the resulting image may suffer from noise due to the size of the sensor and/or its inability to handle noise at high ISO settings. This is exactly the reason why most photographers shoot at base ISO or the lowest possible value for their camera to yield the crispest possible result.

Whether you wield a dSLR camera or not, having a clear understanding of exposure (and each of its facets) can help improve not only your photography skills, but also the quality of your pictures. And now that you have a better grasp on how each setting affects your composition, all that’s left for you to do is to try it out with your camera and experiment by going Manual.

We’ll end this basic tutorial with some tips and tricks to improve your shot through proper exposure.

• There’s no correct exposure. You can have a slightly over or underexposed picture as longs as it’s visually appealing to you.
• Use your camera’s light meter if it has one, it’ll help you get the proper exposure.
• Shoot at the lowest possible ISO. If it’s inevitable for you to increase the ISO, try not to go beyond 1600.
• Depending on the lens that you’re shooting with, it’s best if you shoot at an aperture that’s one or two stops down. Example, if you’re lens is a 50mm f/1.8, setting the aperture at f/2.8 or even f/4 will yield better result.
• For handheld shooting, try not to go below 1/20 shutter speed as to not cause motion blur.
• Invest on a good tripod, it’ll give you more leeway on using slower shutter speed and allow you to take long exposure shots.

Finally, here’s a cool cheat sheet courtesy of the folks over at Living in the Stills that pretty much sums up what we’ve discussed. 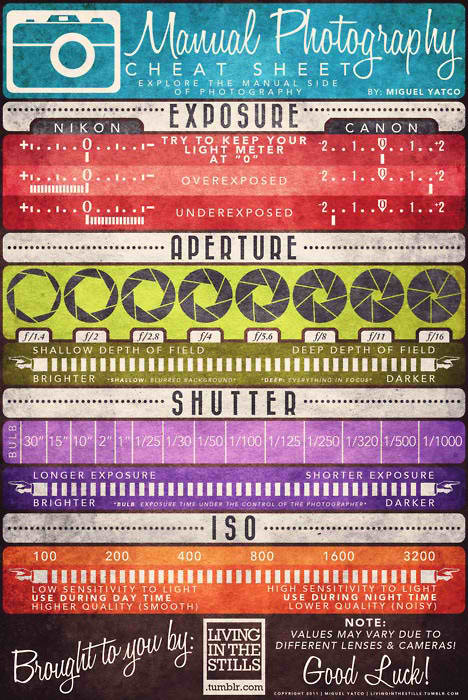 Thanks for this! The basic exposure settings found in a DSLR are already found in 808 PureView which allow you to create fantastic light trails with long exposure with the built-in ND Filter, or bokeh lights becauseof the very wide aperture. Check out my Flickr po www.flickr.com/PureView

Once again, thank you sir for the very informative article! Good job!

Thank you thank you!

Thank you sir Louie! I appreciate it very much. More please ;-)

Very informative. Thanks sir, will try to explore the manual mode sometime. Haha :)