In this episode of specs comparison, we put two flagship devices side-by-side to determine which is better in certain key aspects. Will the newest flagship smartphone of Samsung beat the first ever smartphone of Razer? Let’s find out! 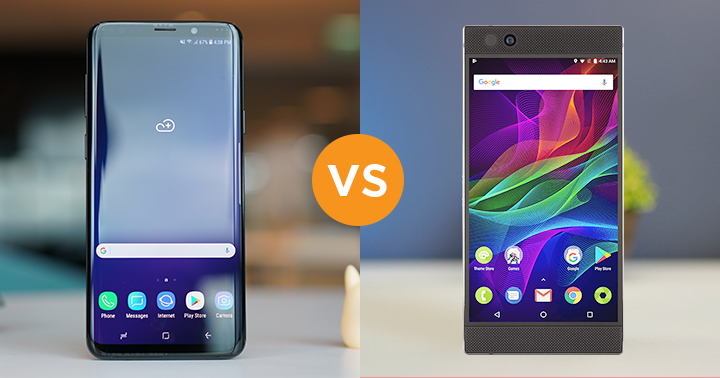 The Galaxy S9+ has a higher screen size, aspect ratio, and pixel density than the Razer phone. However, the advantage of the latter is its 120Hz screen display making videos play at a smoother rate. In terms of viewing experience, both devices are excellent but we would go with the smartphone with a smoother video playback and that is the Razer phone.

The Galaxy S9+ is the first is the first smartphone to be equipped with the Exynos 9810 chipset. The Razer Phone, on the other hand, runs on an older but still powerful Snapdragon 835. Based on clock speed alone, the former has a slightly higher speed than the latter but real-life use will prove which is actually better.

Both devices have dua-rear cameras and single front camera with identical resolutions. The Galaxy S9+, though, has larger apertures on both sides which theoretically, makes it better in capturing images in low-lit scenarios. We’ll know which one is better once we’ve tested both devices.

The Razer phone has a larger battery capacity than the Galaxy S9+ but, it doesn’t have a wireless charging. In terms of battery performance, we have yet to know which lasts longer so stay tuned on our updates for the comparison.

In summary, if users still want to have a dual-SIM card slot, a 3.5mm audio port, IP68 resistance, Iris and Heart rate scanner, then the Galaxy S9+ is the right pick for them. However, if they want to focus on a gaming-centric smartphone that has a 120Hz screen, larger RAM, front-facing speakers with a larger battery capacity then the Razer Phone is the right choice.