Almost two decades ago, paramilitary organization NERV has introduced EVA Prototypes which helped protect Japan (and probably the entire world) from dark forces. But after defeating most of the â€œAngelsâ€, NERV has shift their efforts from making gigantic robots to smartphones which are patterned to their Evangelion’s design.

Working with Sharp and NTT DoCoMo, their latest creation will certainly make any fanboy drool.

Succeeding the first concept phone which was released almost three years ago, the limited edition SH-06D is the latest product of the Sharp-DoCoMo partnership. Not wanting to disappoint their military client and its die-hard fans, the team has put an immense amount of effort in making sure that every inch of the handset screams EVANGELION from its design down to its UI. 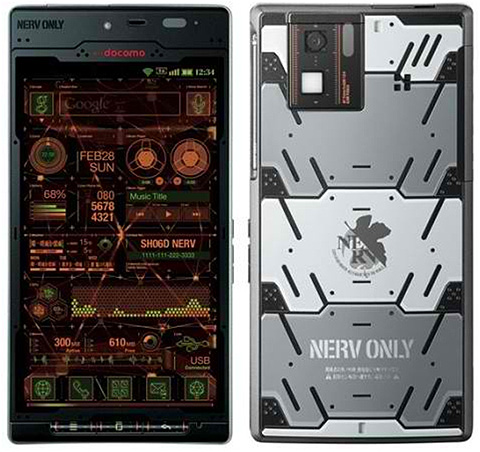 The highly customized theme phone is actually Sharp’s latest Aquos SH-06D which was announced last February. This handset features an impressive 4.5â€ ASV LCD screen with 720×1280 resolution and pixel density of 326ppi. Apart from its HD display capability, it is also equipped with 3D functionality.

In its core, the NERV phone is powered by a 1.2GHz dual-core TI OMAP4460 processor backed with 1GB of RAM. It’s not the best configuration weâ€™ve seen but still a promising one nonetheless.

The downside about it is that it runs on Android 2.3. But with its heavily-customized and MAGI-inspired UI, I highly doubt that any users will feel lacking about this handset not running on ICS. Another thing that may pose to be a potential deal breaker is its 1520mAh battery pack. The measly 8GB internal storage is also quite disappointing. And even though the handset supports memory expansion for up to 32GB, a bigger storage wouldâ€™ve been a welcome feature.

Unfortunately, NERV didnâ€™t allow this handset to be available outside of Japan for some weird confidential reasons. To make things worse, theyâ€™ve only allowed Sharp to only manufacture limited number units to only be enjoyed by select few. NTT DoCoMo has recently announced that theyâ€™ll be taking pre-orders from June 16 for the said unit that costs around 25-30K JPY (Php13k to – Php16k) with contract.

Theyâ€™ll also hold a 3-day sale, selling only 1000 units a day which starts on June 29. Weâ€™re hoping to get our hands on one of these but it’s going to be a long-shot. And even if we did get one, weâ€™re not sure if it’s going to be compatible with our local telco. *Deep Sigh*