Last week we got a tip from one of our readers about the upcoming release of the Sony Xperia C in our country. True enough, we spotted the 5-inch dual-SIM handset being displayed inside Sony concept store at SM Cyberzone in Megamall. 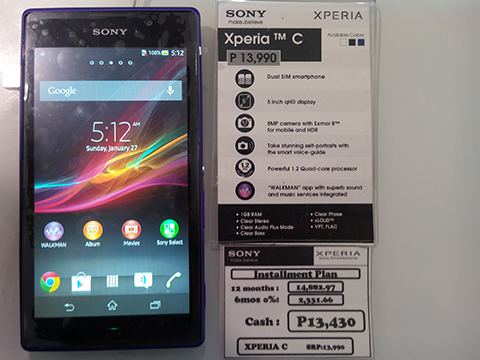 The Xperia C’s design resembles that of the other recent high-end Xperia handsets. But although it sports the same “omni-balance” design scheme, it is a tad bulkier and bigger than its 5-inch siblings like the Xperia ZL.

The real estate at the front is predominantly occupied by its 5-inch qHD display. However, thanks to the fairly thick bezels around it, Sony was able to make room for other components such as the LED notification light at the bottom and front-facing camera. 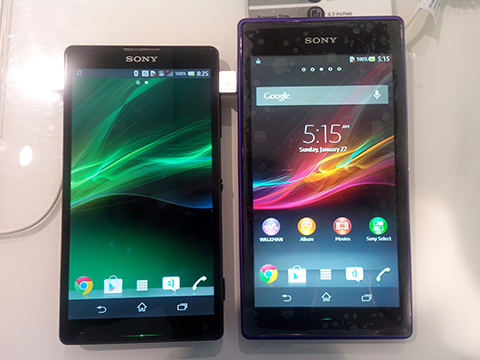 Unlike the front panel, the Xperia C’s underside is less cluttered. The top side is where the 8MP shooter is, neighbored by an LED flash, and towards the bottom is where the speaker grills are located just below the “Xperia” marking.

There’s not a lot going on the left side apart from Micro-USB port. Meanwhile, the right side is composed of a total of four physical buttons namely Power/Sleep button, volume rocker and shutter button.

From a design and build standpoint, the new Sony Xperia C looks and feels like it’s the real deal. We have to say that this one really pose a threat to the other premium dual-SIM smartphones in the local market, especially because it comes from a reputable brand.

Of course, there’s a lot about this handset that we haven’t discussed in our brief encounter. And for that, you just have to stick around for our full review, hopefully by next month.