Yesterday, we were with Sony Philippines as they launched the new Xperia Z5 series consisting of the Z5, Z5 Compact, and Z5 Premium. From those three, the Z5 Premium is well — the premium device in the lineup and we got a quick alone time with it. Here are our first impressions. 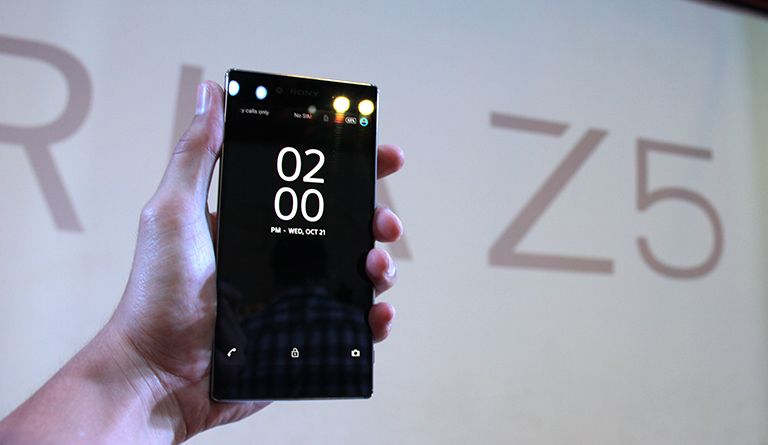 The first thing you’d notice on theZ5 Premium is its 5.5-inch display that spans across and almost takes over the entirety of its face. In this area is where Sony is one-upping its flagship rivals since it’s the first smartphone to have 4K UHD resolution. Those are 3840 x 2160 pixels that result to a stunning 806ppi.

Other flagships top at QHD resolution displays, but Sony obviously rises above its peers in this aspect.

This pixel-packed display is then fitted inside a metal frame that adds to that premium feel when holding the device. At the right panel are the Power/Lock button followed by the volume rocker and a physical shutter button that the Xperia line is known for.

You may have noticed that the Power button now looks different from the otherwise circular button that was present in the previous iterations. This is because the newer (and definitely wider) button now doubles as a fingerprint scanner for added security while using the handset.

Up top on the left side is a 3.5mm jack for connecting the headphones. As expected, the Z5 Premium still has the same waterproof and dustproof capabilities so the audio jack (as well as the microUSB port at the bottom) could handle being submerged in water even without any cover on them. The company calls them their cap-less ports. For storage expansion, the left side houses the microSD card hidden under a metal flap. Once closed, it reverts back to its seamless all-metal appearance which is definitely pleasing to the eyes. 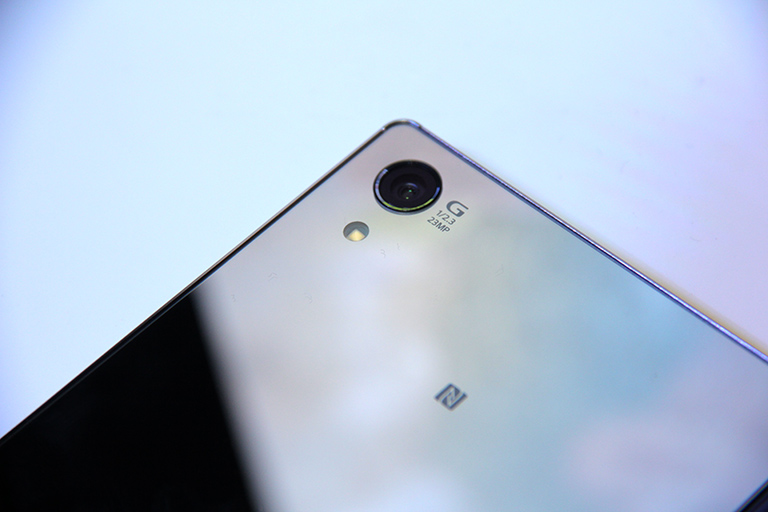 Its 23-megapixel rear camera stands proud at the upper left corner of the back, and is supported by an LED flash that should come in handy when in low light situations. For the optics, Sony used its next-gen EXMOR RS sensor with an f/2.0 wide angle lens to maximize imaging. On top of that, the company boasted that it is capable of focusing on a subject automatically for as quick as 0.3 seconds — clearly battling the laser autofocus of other smartphones.

NFC makes its way to this smartphone as a recurring feature and is indicated by the symbol at the upper middle area — just connect it together with another NFC-enabled device and wireless pairing is instantly achieved.

The entire back panel is mirror-like and as you may have already guessed, is a strong fingerprint magnet.

At the bottom we have the cap-less microUSB port for charging and transferring files. From this angle we could also see the amount of craftsmanship poured into the device. Its sleek, round edges make the Z5 Premium  a joy to hold as it sits comfortably at the palm of the hand. 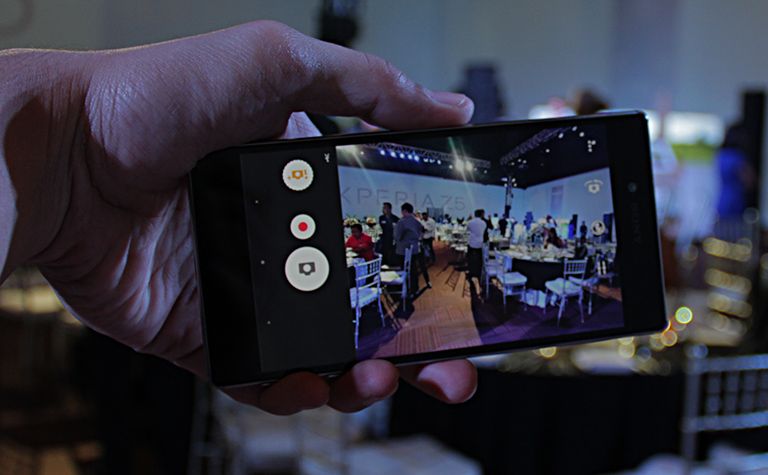 We tried shooting a quick 4K video during the launch to test its camera and at the same time, its display. Undoubtedly, the image quality was sharp and colors were faithful and natural during playback.

We’ve seen UHD resolution on 55- and 60-inchTV displays in the past, but there was a sample video in the phone that showed what it’s like watching Ultra High Definition in a small 5.5-inch screen. It was truly an experience, but it got us thinking that it’s still not that usable as a feature per se since while there are some resources of 4K content online, it still is somewhat scarce as a whole.

Although that may be the case, Sony has already set the record for being the pioneer in 4K resolution for smartphones.

Sony still hasn’t announced the local price for the Z5 Premium but it will be available starting December 3 with pre-orders beginning on November 6 until 22.