The mid-range smartphone market is heating up. In this specs comparison, we’re going to put two smartphones with notches side-by-side to see which one is better on paper. Will it be the ASUS Zenfone 5 or the OPPO F7? Find out below! 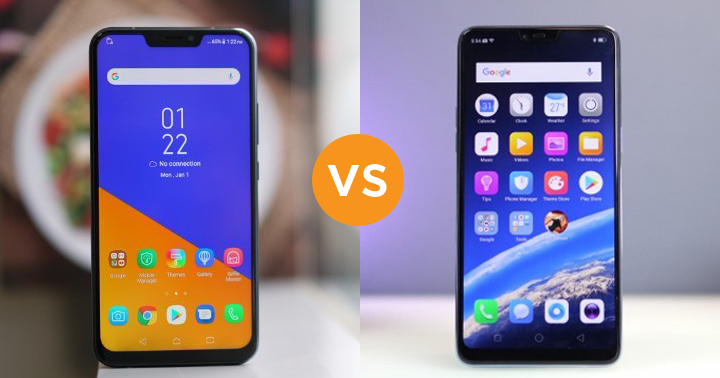 Both smartphones have an almost identical display except for the panels that they use. The ZenFone 5 uses the standard IPS LCD while the OPPO F7 uses the LTPS IPS display. The latter helps in providing higher screen resolutions, larger pixel densities and has a lower power consumption than the former. These factors improve the viewing experience of the device.

The ZenFone 5’s Snapdragon 636 and OPPO F7’s Helio P60 processors are both relatively new. Both have the same 14nm architecture so users shouldn’t be arguing about whether the other one heats up quickly since they do warm up after a fair amount of use. The F7 yielded  138,658 while the Zenfone 5 had 124,816 which is not by a mile but shows that the former has a better CPU and GPU performance than the latter.

The ZenFone 5 has a dual rear camera setup with a wide-angle lens as its secondary shooter while the F7 has single rear setup but has a higher resolution. One thing to note is that the former can shoot videos up to 4K resolution while the latter can’t.

The front camera of the F7 is the main feature of the device which sports a 25MP with A.I. Beautification 2.0 while the ZenFone 5 has an 8MP one. Readers can check out the sample shots that we’ve taken on both smartphones here. (ASUS Zenfone 5 and OPPO F7)

The ZenFone 5 has a slightly lower battery capacity but it has a Smart Charging S technology which is similar to the adaptive charging tech that the F7 doesn’t have. Their battery life is affected by main factors like the display, processor architecture, and OS.

If users want a smartphone with a better viewing experience, CPU and GPU performances, a dedicated microSD card slot, and is more affordable, then the F7 is the right pick. For users who want to shoot at a wide-angle lens, record 4K videos, a USB Type-C port, and a battery with Smart Charging S technology, then the ZenFone 5 is the choice.