In this episode of specs comparison, we will be comparing two smartphones that belong to a local brand. Let’s start! 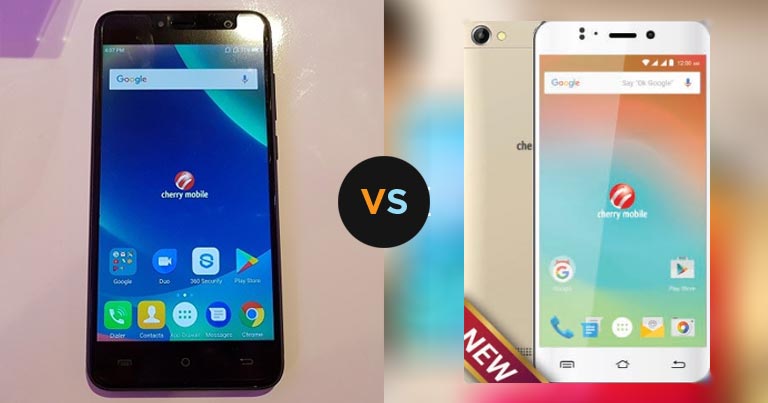 The Cherry Mobile Flare S6 has just been announced recently and is one of the many variants that the company has released for their Flare S series this year. It has a 5.2″ HD IPS display with a 1280 x 720 resolution, a MediaTek MT6737 chipset, 16GB internal storage, 2GB RAM, a 13MP rear camera with LED flash, a 13MP front camera, and a 2,600mAh battery.

The Cherry Mobile Flare A5 is expected to arrive this Christmas season and has not made any proper introductions yet to the public. It has a 5″ Full HD IPS display with a 1920 x 1080 resolution, a MediaTek MT6753 chipset, 16GB internal storage, 3GB RAM, a 16MP rear camera, and a 8MP front camera.

Here are their tentative advantages from each other.

As you may have noticed, there are still missing specifications from the Flare A5 since it hasn’t been properly introduced yet, but we can make good assumptions from what we know so far.

For the display, the Flare S6 has a larger screen size but only for a measly 0.2-inches. The Flare A5 has a higher screen resolution but from a personal perspective, the latter gets an upper hand when it comes to better viewing experience since the resolution will make a difference for users who like to watch videos in Full HD.

As for the CPU and GPU, the Flare A5 has a better performing CPU with its MT6753 chipset compared to the MT6737 chipset of the Flare S6. They may differ in chipset but they have the same Mali-T720 GPU. The former’s chipset is decent for a budget smartphone and its gaming potential is alright for lightweight games. Expect that your smartphone to easily heat up, though, if you continuously play without rest.

For the camera department, since we do not have any sample photos for both smartphones yet we will resort to checking their resolution. The Flare S6 has a higher front camera resolution while the Flare A5 has a higher rear camera resolution. To put it in simpler terms, the former can be a better selfie smartphone and the latter could be a better rear camera smartphone. But take this with a grain of salt as it will now always come down to resolution when it comes to producing good photos.

For their batteries, the company has not yet announced the capacity of the Flare A5 but we should expect that it will be around the same range as the Flare S6’s 2,600mAh battery.

In terms of overall performance, the Flare A5 is a better pick since it has a better performing CPU and has a 3GB RAM which is larger than the 2GB RAM of the Flare S6. Also, for the viewing experience, users can choose if they want to have a larger screen size or a higher screen resolution for watching videos or playing games.

Which Cherry Mobile smartphone would you pick? Let us know your thoughts in the comments section below.