In this episode, we will be looking at two new smartphones from Cloudfone, the Excite Prime 2, and the recently released Next Infinity Pro. Let’s start! 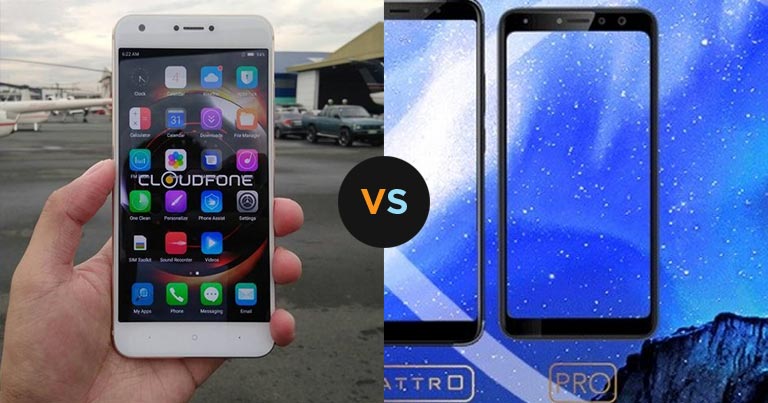 Let’s look at their detailed specs.

If we look at their specs closely, both smartphones have their own advantages and disadvantages. The Excite Prime 2 Pro has the standard 5.5″ display with 1920 x 1080 resolution, but the Next Infinity Pro has a larger screen size and aspect ratio with a smaller resolution. For users who want to have a better viewing experience, you can go with the latter as it gives more viewing area for you to watch.

Both smartphones carry the same Snapdragon 430 chipset paired with an Adreno 505 GPU. Performance and gaming potential-wise, both perform the same speed for day-to-day tasks and for playing games. Users can play light-moderate games smoothly without having heating problems since the SD 430 is known for its power-efficiency for low-mid tier smartphones.

Both Cloudfone devices’ main feature are their dual cameras. The Excite Prime 2 Pro’has a 13MP + 8MP dual rear cameras while the Next Infinity Pro got the upper hand with its 20MP + 8MP (wide-angle) dual front cameras. These selfie-centric devices should have good camera features, however, we cannot say for sure yet which one has a better photo quality. Once we get our hands on the units, then we can do a comparison for both of them.

In this department, both smartphones have the same battery capacity. The Excite Prime 2 Pro has a fast charging technology but we are not yet sure if the Next Infinity Pro carries it as well. Based on our previous review with the Excite Prime 2, the smartphone only lasted around 6 hours with our battery test so hopefully, the company has resolved this already with their new releases.

Since both smartphones have the same CPU and GPU, it’s safe to say that they have the same overall performance but, if we also consider their memory, we can say that the Excite Prime 2 Pro will have more endurance in terms of running multiple applications at once. As for viewing experience, it depends upon users’ preference if they want a smaller screen size with a 16:9 aspect ratio or a bigger one with an 18:9 aspect ratio.

Which smartphone would suit your taste? Let us know your thoughts in the comments section below.