Looking at the device from the get-go makes you realize that the Excite Prime has evolved into something different from last year. The front has the usual sensors, the eight-megapixel front camera with an accompanying LED Flash and the 5.5-inch display. The navigational buttons are still on-screen and the chin helps when holding the phone in a landscape position for gaming.

The front is enclosed in a 2.5D curved glass screen that feels just right when swiped onto. 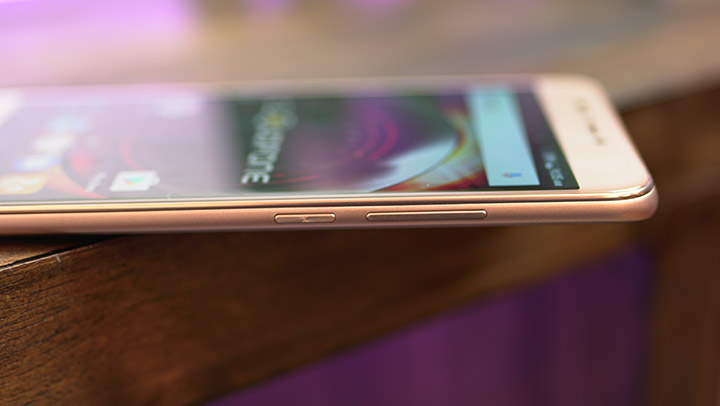 The sides are an extension of the unibody clamshell back cover and offer a nice grip, partly due to its construction that provides a curve on the sides of the back, nearing to the edge. The monotonous gold color of our device is broken by a nice chrome accent circling the display area, providing a classier look. The volume key and power/lock button with micro-concentric designs are located on the right side, while the microUSB and 3.5mm audio ports are at the bottom and top, respectively. Flipping the device over, we have the 13-megapixel rear camera that does protrude from its golden-colored polycarbonate back shell, emblazoned by a chrome ring as with other Cloudfone devices. The sole LED Flash sits below it, as well as the back-firing speaker which is located towards the bottom of the device.

It feels a lot more premium than the Excite Prime released last year. It may be bit shiny, but the smudges and grime that stay on prolonged use are easily wiped off due to the nature of its semi-glossy finish. The Excite Prime 2 is also a lot better to hold and operate due to lesser side bezels, but may still require two hand operation when typing at times.

Cloudfone has put in a 5.5-inch Sharp IPS display at the front which is still in the usual 720p HD flavor. Despite the seemingly low resolution for the device at 267ppi, the images still appear to be crisp and details are still visible to the naked eye. The display only allows for up to three multi-touch points that could be a problem if you’re into gaming or fast typing. 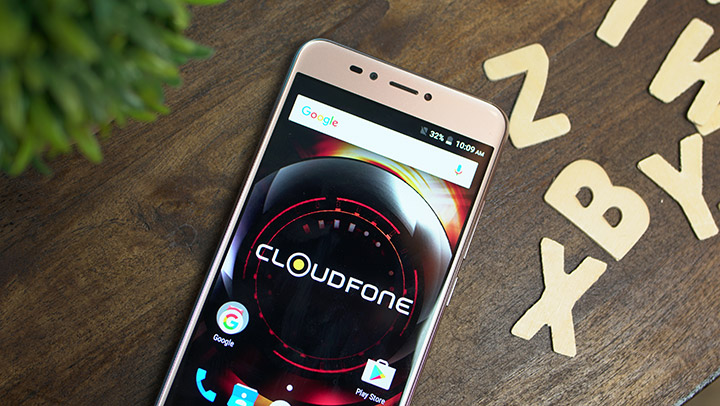 Colors on the display are accurate with good contrast and brightness that lets you view the display under the sun, and are well-reproduced when looked at any angle. In fact, the display is so bright that the lowest setting isn’t suitable that much for bed reading. We suggest using a screen overlay app such as twilight when reading on dark environments to prevent eye strain.

As such, multimedia content is still enjoyable despite the given resolution. The mono loudspeaker pumps out decent sounds with a good balance of trebles and bass but sounds a bit cracked when setting at the highest volume. You may also want to use your own pair of headphones as the provided ones are not adequate for noisy environments and sound a bit shallow. If there is one thing that I would want to highlight as the best part of the device, it has to be the cameras. The camera software, first and foremost, is upgraded to provide the user with a better shooting experience with lots of modes: a night mode automatically appears when the subject is too dark, and other modes such as panorama, beauty, and time-lapse are present should the user warrants a need to use. There’s also a Pro mode that lets you toggle camera settings to achieve the desired output. 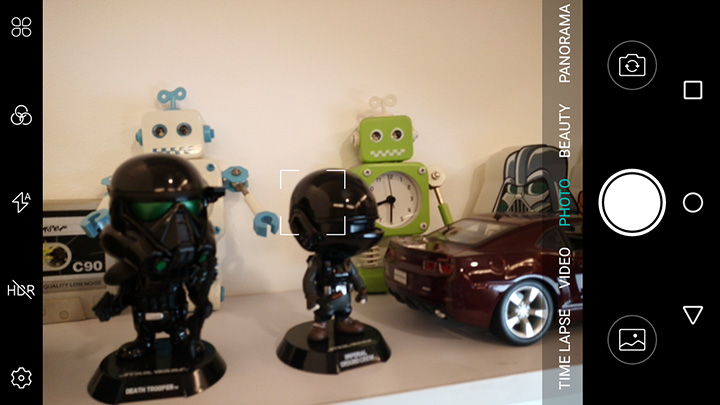 The 13-megapixel rear camera shoots with accurate colors and sharpness, even with subjects captured in low light. The accompanying dual-tone flash is bright enough to fill in light on its subjects. Likewise, the eight-megapixel shooter at the front is decent for selfies with tons of beauty and contouring configurations in tow and includes a portrait mode where the software puts in a digital blur at the background that can be adjusted by toggling the settings. Here are a few sample shots:

Cloudfone, on the other hand, has restricted video capturing to be only at 720p. As such, videos present itself with a lot of digital noise even on well-lit environments. Here’s a sample clip:

We’d also like to note that the rear camera glass gets easily scratched mainly due to the fact that it’s a bit protruding out of the back. A jelly case or protective shell is a must to protect the camera.

Cloudfone has baked in Android Nougat on the device, which is a far cry from the Lollipop installed in the first iteration of this series. Gone are the days where you’re limited to organizing apps on-screen with a lack of an app drawer as it’s almost stock — save for a few features that may seem to be a trademark for Cloudfone devices such as gestures, scheduled on/off, protected apps, and smart gestures. 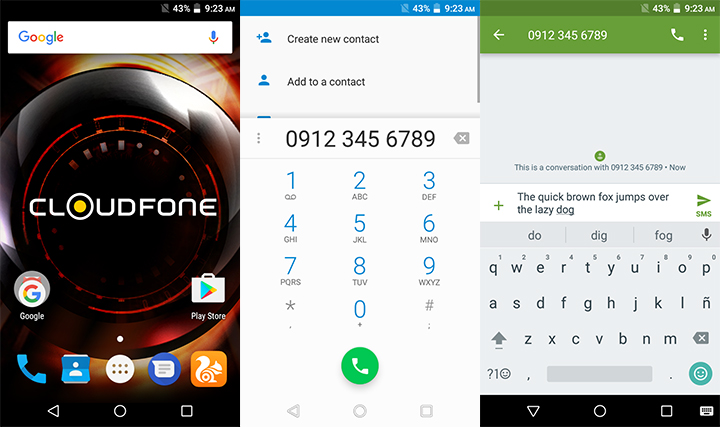 Default apps include pre-installed ones such as Lazada, PawnHero, Spotify, UC Browser, and EA Games, as well as Cloudfone’s own App Store where users can download full versions of applications. This also makes the device more laden with advertisement-like notifications as we received Uber invites the moment we connected the phone to the internet. With all the apps installed, there’s 24.8GB of free space left out of the 32GB internal storage it possesses. There’s also additional space through a microSD card, which has a dedicated slot in this device.

Armed with a 1.3GHz 64-bit Quad Core MediaTek MT6737 and 3GB RAM, we expect the Excite Prime 2 to perform a lot better than its predecessor launched last year. As we use it for everyday tasks, there seem to be a few occurrences of lag and heat ups even on the most simple functions — watching YouTube videos on WiFi heats up the upper part of the device, and the same goes with playing graphic-intensive games with light to moderate stutters even on low settings. Here are our benchmarks: Phone connectivity, for the most part, is doing good: WiFi works well with a range of routers it has connected to, and Bluetooth is seamlessly connecting to a range of my wireless audio gear. GPS, on the other hand, could be a problem with this phone as it does not respond well to our GPS Test. Calls made using the phone are good, the signal isn’t much of a problem especially in open areas, and both the microphone and call speaker produce audible and desirable results. Cloudfone’s Excite Prime 2 seems to be a battery conserving device with a 3000mAh battery and Android Nougat on board, but it isn’t the case when we used it on on a daily basis. Battery drops incremental percentages every hour even when idle, and doing strenuous tasks on the device takes a huge chunk of the battery time remaining. As we did our test using PCMark’s standard battery loop, we were only able to gain 6 hours and 7 minutes. Video loop test only clocked in at 7 hours and 42 minutes — that’s a bummer considering the Excite Prime has better overall scores despite a smaller 2,820mAh battery.

Cloudfone has outdone itself by bringing in a new device that claims to be a successor to last year’s Excite Prime, and the Excite Prime 2 is a good smartphone for a couple of reasons. Its better design, good display quality, and the great cameras with better functionality are some of its top features worthy to be commended for a device priced at Php5,999. We’d like to note, however, that the Excite Prime 2 does have many drawbacks to its internals. The fast-draining battery life, the easily-scratched camera module at the back, and the fact that its performance is roughly the same as its predecessor, despite upgrades on its internals, are some notable setbacks that may hinder you from purchasing this.

Despite that, the Excite Prime 2 is a true successor — and Cloudfone’s evolution for its budget device king is nowhere near stopping at this point.

To know the awesome product deals of Cloudfone, visit the Cloudfone Shop-in-Shop in Lazada.

is it capable of mirroring without the use of mirrorcast or anycast dongles?