Specs Comparison: Xiaomi Redmi 5 Plus vs Huawei Nova 2i vs Infinix Zero 5

Specs Comparison: Xiaomi Redmi 5 Plus vs Huawei Nova 2i vs Infinix Zero 5

In this specs comparison, we put three smartphones side-by-side to see which has the upper hand in different aspects. The Xiaomi Redmi 5 Plus versus the Huawei Nova 2i is highly requested by the readers but there’s one more that we can add to the mix — the Infinix Zero 5. Let’s start! 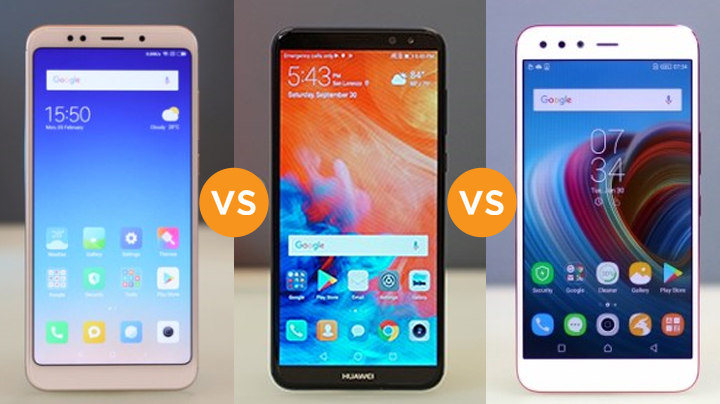 The Xiaomi Redmi 5 Plus was released in December last year and it is available in the Philippines for purchase. It has a 5.99″ FHD+ display with 2160 x 1080 resolution, a Snapdragon 625 processor, a 32GB/64GB internal storage, a 3GB/4GB RAM, a 12MP rear camera with dual-tone dual LED flash, a 5MP front camera with soft-light LED flash, and a 4,000mAh battery with fast charging.

The Infinix Zero 5 is the company’s latest smartphone sporting a decent processor and a large RAM capacity. It has a 5.98″ 16:9 FHD IPS display with 1920 x 1080 resolution, a MediaTek Helio P25 processor, a 64GB internal storage, a 6GB RAM, a 12MP + 13MP rear cameras with dual-tone LED flash, a 16MP front camera with LED flash, and a 4,350mAh battery with fast charging.

Here are the rankings of each key aspects:

Users who are fond of watching videos can choose any of these devices since all mentioned smartphones have a large, almost 6-inch screens. The Redmi 5 Plus and Nova 2i have the upper-hand because of their 18:9 screen aspect ratio with a higher vertical resolution.

The Snapdragon 625 is the most optimized and power efficient due to its 14nm architecture while the Kirin 659 and Helio P25 both have a 16nm. In terms of clock speed, the Helio P25 has the best performing processor among the three. The Snapdragon 625 is the least performing but it is not that far from the Kirin 659. Overall, all processors are good for mid-range smartphones.

The Mali-T880 GPU of the Zero 5 is the best performing one, with the Redmi 5 Plus’ Adreno 506 coming second and the Nova 2i’s Mali-T830 last. Playing with mid-graphics games won’t pose any problems to all GPUs but the Mali-T830 will fall behind when tested when it comes to graphics-intensive games.

Zero 5 has the highest battery capacity among the three. The Redmi 5 Plus comes second while Nova 2i goes last. We’re yet to test the battery life of the first and second one so we will be updating this article as soon as our review comes out. Both of them also have fast charging technology in which the Nova 2i lacks.