The Starmobile Knight has been officially announced today, carrying a quad-core CPU, a 4.7-inch HD display and an 18 megapixel rear camera. The Starmobile Knight is a rebranded i-mobile IQX which we already featured early this month. Starmobile claims that their offering is a newer model so there maybe some slight differences compared to the original IQX. Unfortunately, Starmobile didn’t release an official spec sheet to compare it with so this will have to do for now. 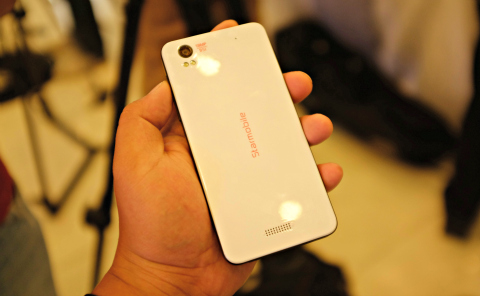 Much to our dismay, there’s still no word on pricing but we were informed that it will be available in mid-July together with the 5.7-inch Starmobile Diamond V7.

very satisfied with my SM Knight!

My very first starmobile is a crystal. I love this crystal so much that i’m keeping it while having another phone. I love everything about starmobile and it’s quality line-up. I’m just disgusted with their marketing strategy.

1. They’re shy about their prices.
2. Launching phones but availability is like two calendar pages away.
3. They may be on stage, and the show hasn’t started yet and audience are starting to get distracted by other models.
4. Their term “New” is already “Old” in a month.

In before that usual Cherry Mobile representative rants to hell about how overpriced this thing is. Doo di doo.

hopefully, the internal memory would be upgraded to 8g or more. it’s really annoying to have a phone like this and yet you cant play 3d games

Looking like a beast!
The Force is strong with this one!

the force on this one will also burn a freakin hole in your pocket! lets just hope starmobile won’t ask for an arm and leg on this china phone, lols