“Android online daters are promiscuous redheads, iOS daters are rich alcoholics” – that’s what AYI.com, a dating website reveals from a survey they conducted. Is this a fact between Android and iPhone users? 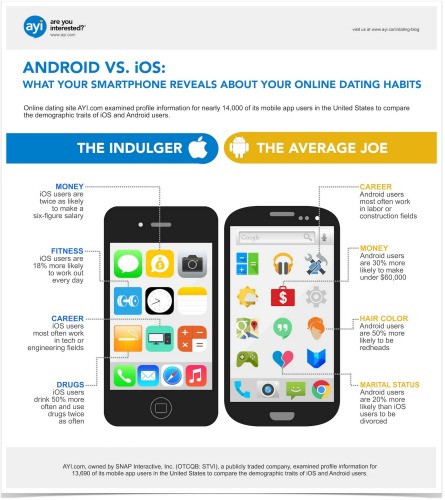 AYI.com’s mobile app is basically like Tinder in which you could browse different users in hopes to find your true love or just a simple hook-up. The app has nearly 14,000 subscribers in which AYI used to collect data and surprisingly come up with interesting finds.

Additionally, the survey also shows that people who use Android in the dating app are found to be slightly older with 42% consisting of individuals aged 45-60, contrasting to 67% of iOS users that are under 45 years old. That’s not all, it also tells us that 83% of iPhone holders have more money to spare as they are likely to make over $150,000 annually, while 30% of Android owners are likely to only make under $60,000 per year. This also backs up the report that iOS owners in America live in a wealthy environment while Android users stay usually at the slums.

Notably, iPhone users are reported to be the party people as they drink alcohol and do drugs twice as often as those using Android.

Although this is not really a solid basis (we’re pretty sure not everyone displays their actual age on a dating app, for example), we can somehow get an idea as to what kind of people use the two biggest handsets – in the United States, at least.

Can we say the same here in the Philippines? Do you find any of these relatable to you?