Xiaomi has just unveiled its latest Android One smartphone, the Mi A3. Apart from the stock Android UI, the Mi A3 also has 4GB of RAM, Snapdragon 665, and triple rear cameras. We put it up against another of Xiaomi’s smartphones recently launched this year, the Mi 9 SE. Check it out! 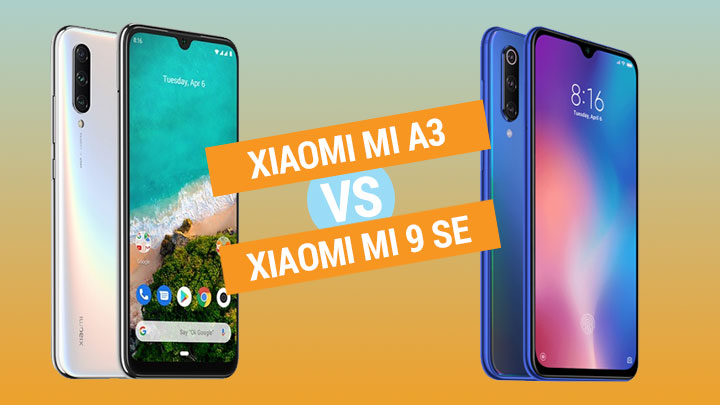 Beginning with the display, the Mi A3 comes with a larger screen size at 6.088-inches, while the Mi 9 SE comes in a smaller size of 5.97-inches. While the 9 SE does have a smaller display, it has an FHD+ resolution, compared to the A3’s HD+ resolution. Both smartphones are Super AMOLED though, and both of them have Xiaomi’s Dot Drop display — which is pretty much just a fancy term to say that they have drop notches upfront. Both smartphones are also protected with Corning Gorilla Glass 5.

When it comes to processors, the Mi A3’s powered by Snapdragon 665, one of the latest mid-range chipsets launched by Qualcomm. An upgrade over the Snapdragon 660, the SD 665 has an 11nm architecture and comes equipped with Kryo 260 Cortex A-73 and Cortex-A-53 processors. We’ve yet to see the actual performance of the SD 665 on a device, however.

On the other hand, the Mi 9 SE is powered by Snapdragon 712, the successor to the Snapdragon 710. We’ve seen the SD 712 perform, and with its 10nm architecture and multiple cores, the SD 712 would be more powerful than the SD 665. The SD 712 is, after all, built mainly for gaming and AI.

The Mi A3 has 4GB RAM, while the Mi 9 SE easily trumps that with its 6GB RAM. Both smartphones have two storage variants, 64GB and 128GB. While some people may be satisfied with those storage options, the Mi A3 goes an extra mile with its expandable storage of up to 256GB via microSD. The Mi 9 SE doesn’t have any storage expansion options, which might be a disappointment for some.

As for cameras, the A3 possesses a 48MP + 8MP + 2MP triple rear camera setup. Meanwhile, the 9 SE has 48MP + 13MP + 8MP cameras, also located on the rear. On paper, the Mi 9 SE’s triple cameras trump what the A3 has. Still, both of them do have a 48MP main shooter and ultrawide lenses. Front camera-wise, the A3 has a 32MP shooter, while the 9 SE has a 20MP one. The specs do look good on paper but of course, we’ve yet to see how the A3’s cameras actually perform.

Users may virtually pay using the Mi 9 SE’s NFC support; unfortunately, the Mi A3 doesn’t have this feature. Something that can be found on the Mi A3 though is a 3.5mm audio jack, which the Mi 9 SE in turn, doesn’t have. Both smartphones have face unlock features and have in-display fingerprint scanning. The two devices also have USB Type-C as their charging ports.

OS-wise, while both the A3 and Mi 9 SE run on Android 9 Pie, the A3 has Android One, which is the stock Android. As for the Mi 9 SE, it has Xiaomi’s MIUI 10. Stock Android means the A3 doesn’t have any bloatware, while the 9 SE has Xiaomi apps and other third-party apps in it. Not to mention, some ads in the UI.

Here are the prices of each smartphone and their variants:

We’ve yet to know about the Xiaomi Mi A3’s local pricing and availability so, between the two devices, the Mi 9 SE is currently the more accessible one as it’s been available for purchase in the country since May. If you’d like a device with expandable storage and a stock Android experience, do go for the Mi A3. If you’d rather have a device with FHD+ resolution and a better CPU performance, go for the Mi 9 SE.

Which phone is your pick? Share it with us in the comments!