Google has been adding a lot of UI improvements in its services recently, from the Play Store, Maps and other apps to its social networking site Google+. Now, YouTube’s Android app follows as it reaches version 5. 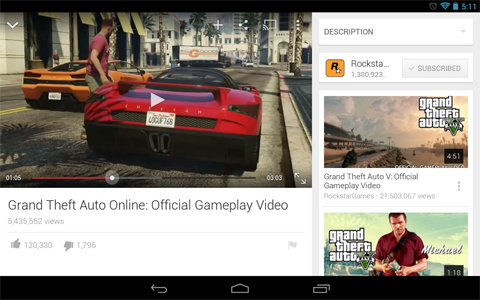 Users will now receive Google’s Cards UI, similar to Google Now, the Play Store & G+. As you can see above, tablet users will be benefiting from the enhanced UI greatly. Apart from that and all of the design improvements, the update now supports multitasking within the app so that you can browse other selections while watching a video.

You can check out our short hands-on video here:

The update will slowly roll out to all users, but Android Police already has sets of APKs for sideloading just in case you want to get it before everyone else does.

I still prefer a 3rd Party Youtube viewer for Android: Tubemate. As it gives me granularity of what quality of video I want to watch and also the option to download videos in various quality: from the poor man’s 144p to 1080p.