According to Canon, this dual fisheye lens brings stereoscopic 3D virtual reality (VR) capture to the EOS R5 camera as part of the EOS VR System, which also includes a future firmware update for the EOS R5 camera to support the use of this lens with new VR shooting specific functions, as well as new upcoming Canon EOS VR software solutions for conversion and processing.

The RF5.2mm F2.8 L Dual Fisheye features L-series optics engineered with an interpupillary distance of 60mm for delivery of 3D imagery in VR with natural parallax. As per the brand, this closely resembles human vision when viewed through a compatible headset.

The dual fisheye design provides exposure control with a maximum aperture of f/2.8 to a deep depth of field of f/16 with electronically-controlled apertures enabling the dual fisheye lens to operate like other RF mount lenses. 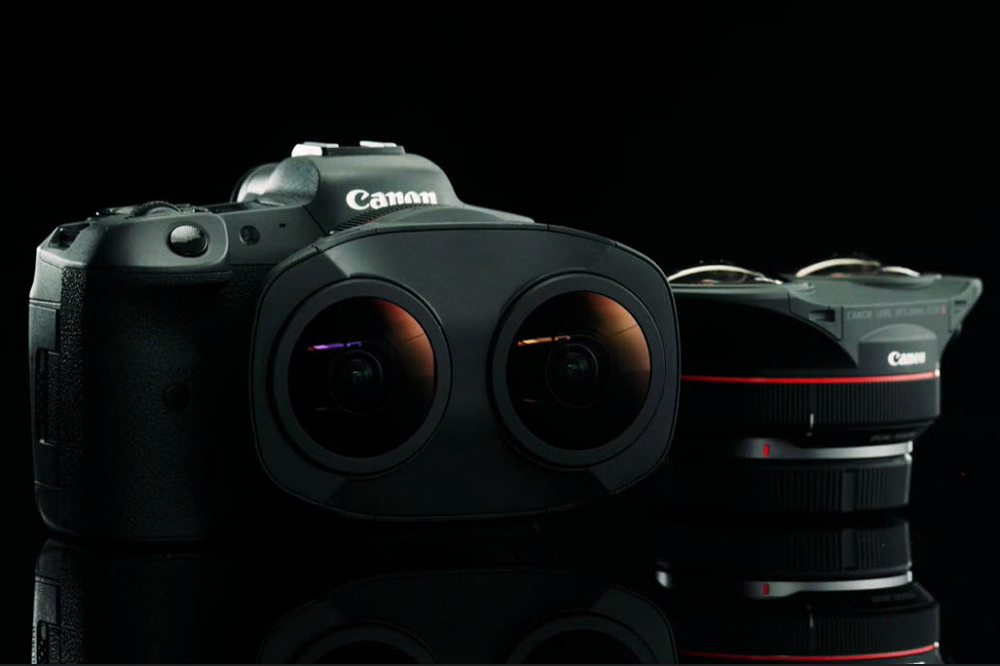 In addition, the lens features dust- and water-resistant sealing with fluorine coating. Canon mentioned that fluorine coating is used on the front to help prevent water, oil, and other surface residues like fingerprints from sticking to the lens, which facilitates quick and easy wiping, without the use of solvents.

• Close-focusing distance of 7.87-inches/0.2m is possible – max magnification is 0.03x.
• Aperture range of f/2.8 to f/16 with a 7-blade aperture and simultaneous electromagnetic diaphragm for both left and right lenses.
• Built-in Gelatin Filter Holder – allows ND gel filters to be used in bright environments if a bright aperture is desired.
• Fluorine Coating on the front lens elements, with a dust and water-resistant design.
• Extremely compact size – allowing it to be used in different types of productions.

Meanwhile, the company revealed that they are currently developing two paid subscription-based software solutions as available options for completing the post-production process. Canon’s EOS VR Utility will offer the ability to convert clips from dual fisheye images to equirectangular and make quick edits, as well as select the resolution and file format before export. On the other hand, the EOS VR Plug-In for Adobe Premiere Pro will enable creators to automatically convert the footage to equirectangular as well as cut, color, and add new dimensions to stories with Adobe Creative Cloud apps, including Premiere Pro.

The Canon RF5.2mm F2.8 L Dual Fisheye lens is priced at USD 1,999 and will be available in the US in late December 2021. In addition to the lens, both of Canon’s EOS VR Software solutions: EOS VR Utility and the EOS VR Plug-in for Adobe Premiere Pro, will also be available in late December 2021. Both software solutions will be available as a paid subscription-based model but will offer free trial periods as well as the ability to process still images and certain clip lengths for free.