Last November 14, Globe shipped out orders of the new iPhone 6 and 6 Plus to subscribers nationwide. There were a lot of people who pre-ordered the new Apple devices and while the first 200 customers who lined up at midnight for the release, the remaining units were scheduled for shipping that very same morning.

We reached out to Globe reps to ask for explanations but have not gotten anything until now so we took to several sources, including customers who were affected.

From what we gather, the problem stemmed from lack of coordination between the telco and their partner couriers. One of the 3 couriers dispatched to fulfill the shipments was Air 21 (we still have to determine what the other 2 are). 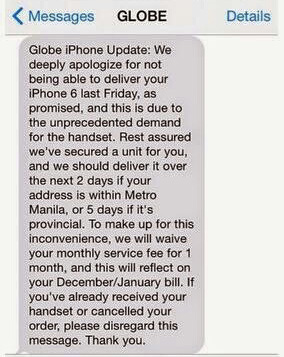 Globe has indirectly admitted the delays and communicated this to their customers. An SMS message was sent over the week-end to a number of customers explaining the delays were due to huge demands of the handset.

As a consolation, Globe is waiving one month MSF to all subscribers who were affected by the delay and promised 2 days shipment for Metro Manila and 5 days for provinces.