The Tegra 4 retain the 4 CPU cores (uses Cortex A15 chips) but improved on the graphics a lot. 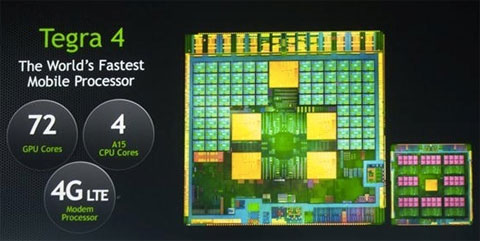 Tegra 4 will also support 4K ultra high-definition video (4 times 1080p for recording and playback). There’s also support for built-in LTE modem, something that is lacking from the old Tegra 3. Tegra 4 also handles HDR very well that it can take photos and apply HDR almost instantaneously (around 0.2 seconds vs. the 2.0 seconds on the iPhone 5).

There’s no announcement yet when this will be available and which smartphones will carry it but we’re excited to wait for further announcements from handset makers during CES.

Soon, the standard for Smartphone Processor speed will level up exponentially and all those flagship phones will again shadowed by new ones.

It’s really sad how your 3-month-old phone will be left behind again that fast.