Qualcomm may have already established itself as one of the major players in world of mobile processors, but that doesn’t mean that the company isn’t looking for other avenues to expand its horizon; As a testament to that, the firm has recently unveiled their latest prototype equipped with Mirasol display technology. 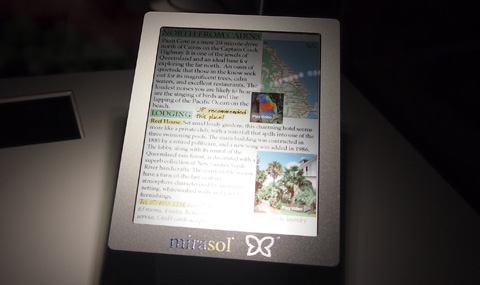 The concept behind Mirasol has been around for quite some time already, and it has been shown in various forms. We actually saw one (see image above) when we visited the company’s museum late last year, but the latest one, which was demoed in this year’s SID Display Week, is by far the most promising.

What we’re talking about is a prototype handset that sports a 5.1-inch display with a resolution of 2,560 x 1,440. If you do the math, that should equate to a staggering 577 pixels-per-inch; the highest pixel density we’ve seen on a smartphone.

But having an insanely high pixel density isn’t the only thing that’s intriguing about Qualcomm’s latest prototype. The company claims that their brainchild is six times better than common display such as LCD and OLED in terms of power consumption. It’s a controversial claim that can only be proven once a finished product is released. Unfortunately, that won’t happen anytime soon as the company states that Mirasol is still under development and will still take a couple of years or so before it reaches production. However, if you’re as intrigued as I am about Mirasol, you can head over to this link for further reading.