MOBA games initially gained traction as a mod to Blizzard games like StarCraft & Warcraft, ending up being called DoTA. Valve picked it up with DoTA 2, and surely, it has inspired companies such as Riot Games to come up with League of Legends. Those games never appealed to me for some reason, but I decided to give it a try anyway; that’s when Blizzard invited me to play technical alpha to their upcoming game Heroes of the Storm.

Note: As of writing, I am testing version 0.5.0.31360. Gameplay elements may change with my opinions upon final release. 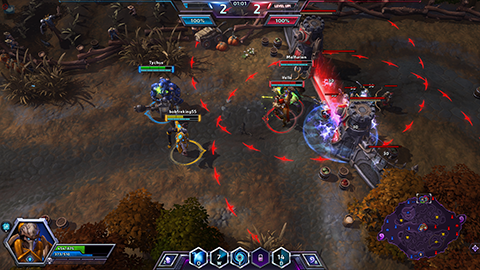 I’m pretty much into StarCraft II, Hearthstone and a little bit of Diablo, and while I don’t play Warcraft, I’m already introduced to their characters through Hearthstone. Basically, if you’re into Blizzard’s games, then it won’t be hard to convince you to play HoTS, as most of the characters you love are already here. If not, I’m still sure having Diablo, Warcraft and StarCraft characters in one game is kickass. 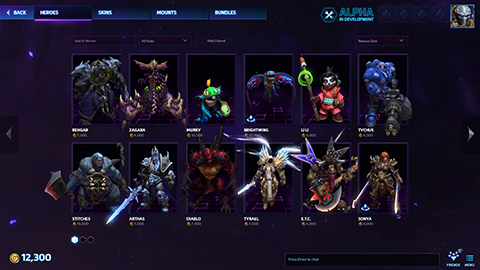 “Having Diablo, Warcraft and StarCraft characters in one game is kickass.”

Heroes, skins and a lot more can be purchased using gold, but if you want to speed things up, you can always pay for it in cash. They’ve given players a chance to try out all the heroes and their differentiated skills and abilities, and so far, they’re all really fun to play with. Heroes are assigned labels for their specialization and difficulty of use to guide players, and I think that’s a nice touch. Lots of balancing and updates are still probably on the way before the release, but as for the experience, it’s all good. “You level up as a team so no one gets left behind.”

So here’s the setup: it’s five versus five and your main objective is to destroy the opponent’s core / base. Depending on your map, there are things that you must do to gain an advantage, all of which will require teamwork. Also, you level up as a team so no one gets left behind. Every time you level up to a specific level, you get to pick which talents to receive which will add power to your hero. You should also choose which is appropriate for your strategy. And you can ride unicorns!

There are no shops and items in game, and I cannot express how much I love that as that was the one of the things that screwed my mind up when I tried playing DoTA. The things that add complexity here are the maps and how your team is going to be efficient in balancing the happenings around the map. There will be objectives for you to accomplish, and if you do it all well better than your opponent team, the Raven Lord, the Dragon Knight or whatever will help you try to win. You can also gain the help of mercenaries and watch towers around the map if you need more support.

With the latest update to the alpha, we got a new playable hero (Rehgar), a new map and a few more additions such as artifacts. At the moment, I have not played with artifacts as I need to rank 15 to unlock it, but going through forums, it is not happily received and is often compared to League of Legends’ runes. Seeing negative feedback, Blizzard may have to do something about it in a future update before the final release.

“You’re not allowed to chat with the opposing team – probably to avoid trash-talking.”

As for the speed and the graphics, I have had no problems with it. The animations may look like it’s too cartoon, and while some may not like that, I find it okay as it doesn’t keep the game’s tone too serious. And speaking of serious, you’re not allowed to chat with the opposing team – probably to avoid trash-talking. The only people who can call you noob or weak now are your own teammates, and for me that’s a good thing as it allows you to focus on teamwork, and it’s a similar formula used by Blizzard in Hearthstone, not allowing players to chat unless you’re friends.

For the most part, I think it is as simple as that; it’s the simplicity that differentiates Heroes of The Storm from League of Legends, DoTA or mostly any other MOBA game. I let other people play through my account as well – people who don’t play MOBAs and they found themselves enjoying it. Heroes of The Storm is ultimately a MOBA for those who don’t play MOBAs, and we have yet to see how the final version will be when it comes out soon.