5 Things We Liked about the new MacBook Pro 2016

Apple’s new Macbook is here, and it brings a lot of good features that would make you swoon over the laptop. Here are five of those features that you may think are gimmicks at first but are rather useful in the long run. 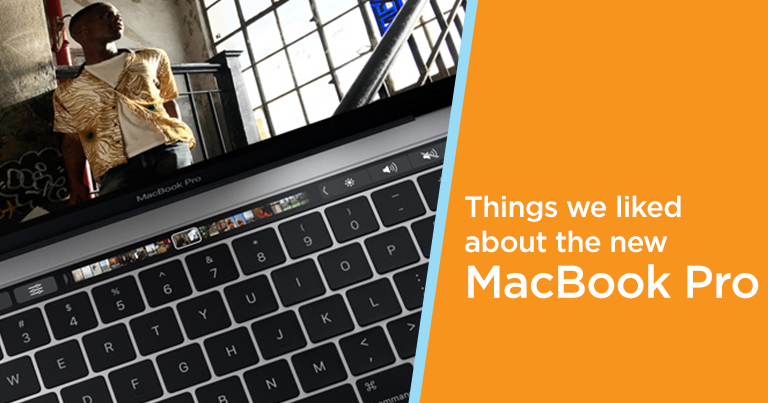 This year, Apple decided on ditching all the function keys in lieu of an OLED Retina display strip they call the Touch Bar. It’s a multifunctional area that addresses quick toggles not only on the system itself, but also on the apps currently at the forefront. For one, it’s a genius move that could actually change how we work with Cupertino laptops. This is the first time they’ve done this, and it’s exciting to see how this would go.

In a rather unprecedented move, Apple made Touch ID official as a special area on the Touch Bar. While it may seem to be over the top as of the moment, we could see many appreciate the increased security levels this could bring, as well as a really wise move to switch users with just the use of the finger as it is capable of registering multiple fingerprints. We could see quick user switch functions being implemented on other devices in the future, too.

The new MacBook Pro also touts twice the area for its Force Touch pad, which gives more room for gestures as you use on the portable device. This also means that there is a larger wrist rest for typing on the keyboard, which could be perfect for those bearing strains when typing on a laptop.

It also comes with 5K resolution display made by LG, which largely represents a wider color gamut with better colors and higher contrast ratio compared to its predecessor. While the changes on similar technology is not seen by the naked eye on the new iPhones, those who are keen on accuracy in color can appreciate this in a larger display size.

Lastly, the MacBook Po packs one of the most powerful hardware combinations today that rivals that of Microsoft’s 2016 Surface Book, and it’s all but at just three pounds heavy. While it’s not something one would use for gaming, I’ve personally seen a lot of professionals in the advertising and multimedia arts world preferring MacBooks as a good tool to freely express themselves and create something magical, which is what Microsoft wants to do today, and they would appreciate the noticeable differences in its overall device profile and weight.

Do you like these features too? Maybe you have a few more, which you can chime in the comments section below. We’ve also made a list of what we hate with the new Cupertino laptop, in case you want to hear all the cons.

Article Under:2016 macbook pro Things We Love about the new MacBook Pro