A new Android tablet from Acer that sports a 7-inch screen, a dual-core CPU, and a sub-$100 price tag, has appeared on an online store in China. Take a look at the ultra-affordable Acer Tab 7.

The Acer Tab 7 features a 7-inch display with a resolution of 1024 x 600 or equal to 170ppi. It has a 2 megapixel rear camera, a VGA front-facing, 8GB of internal storage with microSD card support, as well as basic connectivity features like WiFi, Bluetooth, microUSB with OTG, and HDMI out. 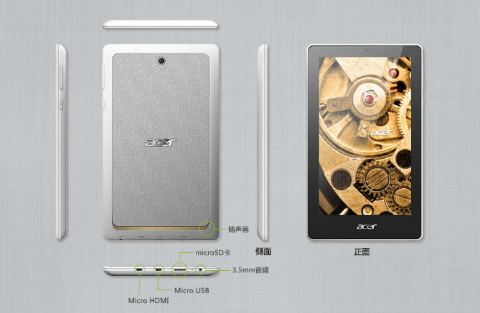 As mentioned earlier, the lightweight tablet comes with a very light price tag. At 599 Chinese Yuan or roughly under $100 or around Php4,400 in today’s conversion, this makes the Acer Tab 7 a very attractive offering for those who are in a really tight budget.