The ASUS Fonepad 7 (ME175CG) is one of the Taiwanese company’s latest 7-inch phone / tablet offerings that packs an Intel Atom processor, 3G connectivity, and dual-SIM functionality. Although we’re not exactly keen when it comes to treating a 7-inch slate as a phone, let’s take a look and find out if the Fonepad 7 can be treated as such by reading our full review. 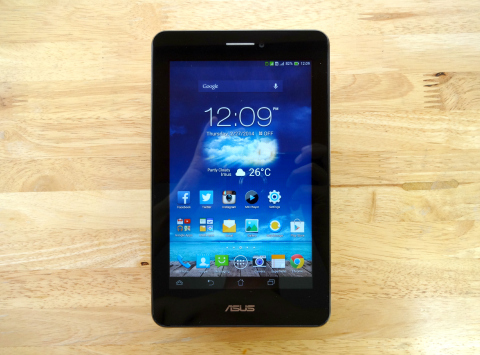 The Fonepad 7’s design is actually based from the ASUS Memo Pad HD 7 we reviewed from last year. It has a simple looking front where it houses the 7-inch display, the earpiece, and front-facing camera. Placed on top is microUSB port and headset jack. Down below is a pinhole for the microphone. 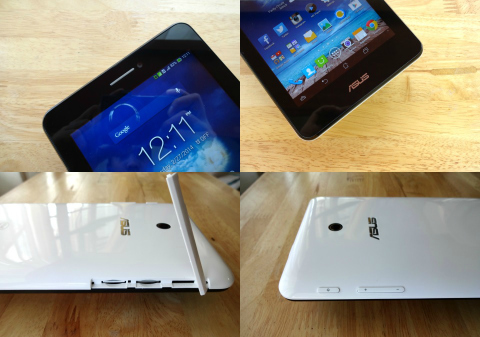 On its left side is a single flap that covers the micro-SIM card slots and the microSD card slot. On the right are the power / lock button and volume rocker. Flip it on its back and you’ll see the 5 megapixel rear camera and the speaker down at the bottom. 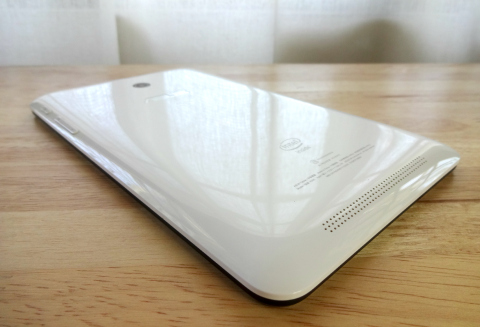 In terms of build, the Fonepad 7 feels just like the Memopad HD 7 but with better construction. The edges of the plastic rear shell doesn’t protrude like it does on the Memopad HD 7, and now has smoother edges with a nice glossy chamfer which makes it really nice to hold.

Speaking of the rear shell, the white unit that we have has a glossy finish to it which is still susceptible to micro scratches. ASUS is offering a dark gray model with a matte finish if glossy is not your thing. Overall, the Fonepad 7’s design and construction is solid at its best. As a phone, you can still grip it with one hand but not exactly comfortable. But as a tablet, it feels nice and easy to hold even with its relatively chunky 11.35mm thick, 340g body.

The Fonepad 7 uses the same type of display found on the Memopad HD 7, that is a 7-inch WXGA (1280 x 800) IPS LCD with a pixel density of 216ppi. Still no Gorilla Glass but you can credit that for keeping the price down.

We had no problems with the display on the Memopad HD 7 so we can say the same thing with the Fonepad 7. Resolution is good, color reproduction is great, and has good viewing angles as well. It doesn’t have auto-brightness though so you need to manually adjust the brightness whenever you use it outdoors or in a poorly lit room.

Running at the core of the Fonepad 7 is Android 4.3 Jellybean skinned with ASUS’ own UI. It’s not the new ZenUI though but more like the same UI that ASUS uses on their Transformer Pads. 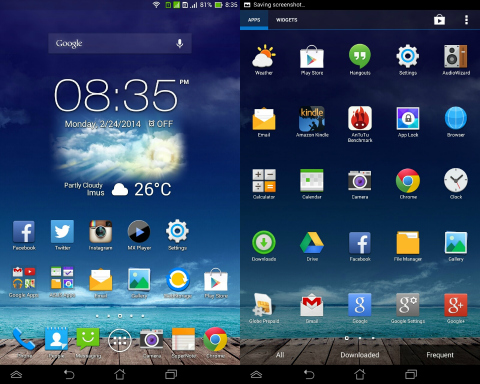 Aside from the usual Google goodies, the Fonepad 7 comes with ASUS’ own baked-in apps like the App Lock, Power Saver, Splendid, Audio Wizard, Mirror, Super Note, ASUS Miracast software, and ASUS Web Storage which can provide you with 16GB worth of storage in the cloud. Third-party apps were kept at minimum and the only one we found here are Zinio and Amazon Kindle Fire. 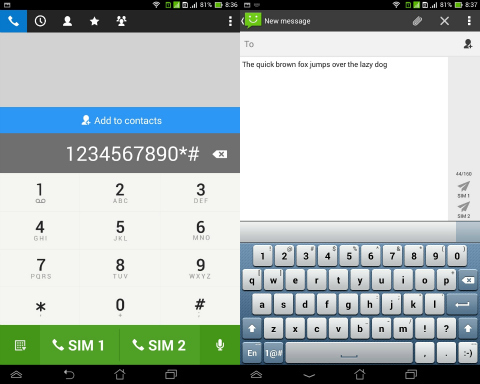 Out of the 8GB internal storage on board, you are left with 5.22GB of usable storage which is very limited. Better equip the Fonepad 7 with a microSD card which it can accommodate for up to 64GB should you need to stock up on movies and MP3s.

The Fonepad 7 is equipped with a 5 megapixel rear camera and a 1.2 megapixel front-facing. Not exactly cream of the crop in its class but it can produce decent photos especially in well-lit places. If there’s one thing we could nitpick about is its slow auto-focus.

But since this is a tablet and not a dedicated shooter, we can say that it should suffice when it comes to ordinary day-to-day photos that you want uploaded on Facebook or Instagram. Take a look at the sample photos below:

Like the Transformer Pad TF701T that we reviewed just this month, the camera on the Fonepad 7 comes with some nifty software features as well like HRD, Beautification, Panorama, Night mode, Smart remove, All smiles, and GIF animation. Those who want a more manual approach can just dig inside the settings and adjust White balance, ISO, and Exposure values. 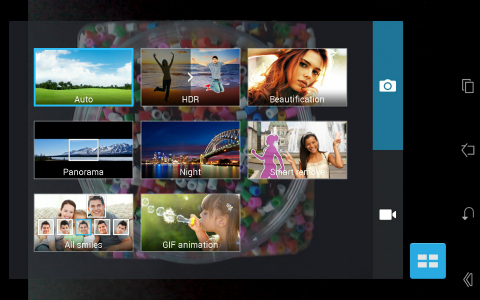 When it comes to video recording, the camera can shoot Full HD videos at 26fps. Take a look at the sample below:

As for multimedia capabilities, the Fonepad 7 is good companion for movies, music, and games. The speaker is very audible and can produce acceptable levels of bass. It also comes with an Audio Wizard to let you pick an optimized setting depending on your multimedia needs.

The Fonepad 7 is equipped with an Intel Atom Z2520 dual-core CPU clocked at 2.0GHz, PowerVR SGX544MP2 GPU, and 1GB of RAM. So far we’re very much satisfied with its performance as opposed to the Memo Pad HD 7 which is powered by a MediaTek CPU. Apps launch fast, animations and transitions are smooth, and overall, very responsive. We played a couple of 3D games and the Fonepad 7 was able to handle it although not as smooth as we expect it to be.

The Fonepad 7 handled calls normally as expected. We can be heard clearly on the other line and vice versa. Although we can hear some static coming from the Fonepad it is faint and can be easily disregarded. One feature we like about it though is that it offers the option to record phone calls which is something you don’t normally find in most smartphones.

We ran our usual series of benchmark tests on the Fonepad 7 and here are the results:

The Fonepad 7 is powered by a 3,950mAh battery that is similar to the one on the Memo Pad HD 7. We ran it through our usual battery test and we got 7.7 hours worth of playback. This is below the battery performance of the HD 7 which is 10 hours.

The ASUS Fonepad 7 (ME175CG) is a strong 7-inch tablet offering that packs a good display and build coupled with a very decent set of hardware and the latest Jellybean out of the box. Not to mention that it has full phone and text functionality, 3G connectivity, and can support two microSIM cards. To conclude, the Fonepad 7 is more like a better equipped Memo Pad HD 7. It’s primarily a tablet that comes with phone functionality and 3G data connectivity as bonuses. So if you’re looking for a very capable 7-inch “phablet” then the Fonepad 7 is definitely one to be considered.

What we didn’t like:
* Slow AF on rear camera
* Small internal storage
* Below average battery performance