ASUS set really good standards on what a 7-inch Android tablet should be with the Google Nexus 7. Now that they have to launch their own 7-incher under the Nexus shadow, they needed something that can shine in its own right without getting burned by its pure-blooded cousin. The company’s answer is the ASUS MeMO Pad HD 7. 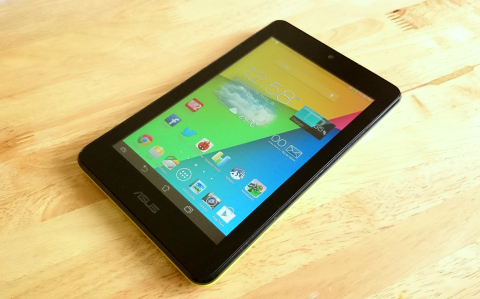 At first glance, the HD 7 looks similar to the 2012 Google Nexus 7 especially if you look on the front. The dimensions are almost the same and if it weren’t for the ASUS logo found below the display it could almost pass as a Nexus 7. 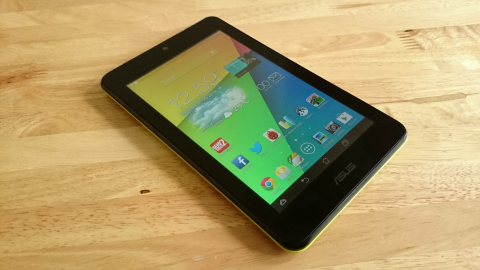 Found on the front are the 7-inch display and the front-facing camera. Right up top are the microUSB port, microphone and headset jack. On the left side is the microSD card slot while on the right, tucked almost underneath, are the the power/lock button and volume rocker. Flip it on its back and you’ll see where the HD 7 differs from the Nexus 7. Instead of a rubber-like backside, it is made of plastic with a glossy finish. Also found here are the 5 megapixel rear camera, the ASUS logo, and the speaker that is also reminiscent of the Nexus 7. 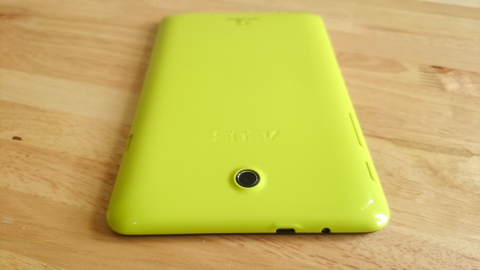 On hand, the HD 7 feels very solid and well built. However, the backside is susceptible to scratches, slightly creaks when gripped, and the edges of the plastic shell protrude which gives an impression that the backside is removable. Some may also find the HD 7 to be a bit chunky at 10.8mm thick, but its light weight (even lighter than the Nexus 7 and the WiFi-only iPad mini) makes it comfortable to use.

The MeMO Pad HD 7 uses a 7-inch IPS display with a resolution of 1280 x 800 or equal to 216 ppi – the same resolution as the Nexus 7. The only difference is that the HD 7 doesn’t use Gorilla Glass to keep the price down. 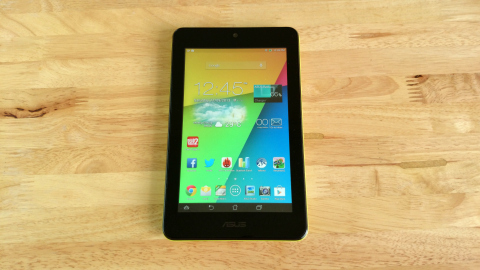 Also, if you’re used to screens with at least 300ppi, you might find the 216ppi on the HD 7 to be a bit of a downgrade. Pixels are sometimes evident but only if you look at the screen closely, but if you’re not picky, you should find the resolution to be very sufficient. In addition, the display’s screen is bright and crisp with good viewing angles. Color reproduction is good as well but it could use a little more punch.

All in all the HD 7’s screen can still provide a good viewing experience whether you’re reading an E-book, browsing photos, playing a game, or watching a movie.

Running the software side for the HD 7 is Android 4.2.2 Jellybean. The UI looks almost stock with some minor additions made by ASUS like the widgets and a fourth button that sits on the left side where the Back, Home and Recent Apps controls are located. This button pulls up a menu of windows for multitasking purposes such as Calculator, Calendar, Stopwatch, etc. Nothing much has changed in terms of UI navigation. However the drop down notifications bar looks different from your usual Android Jellybean tablet but still looks good. 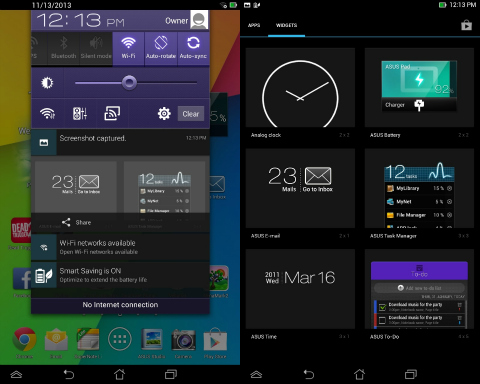 As usual, your basic Google apps are available out of the box. Google’s been releasing a lot of updates on their apps so make sure that you check them out when you sign in on your Play Store account. 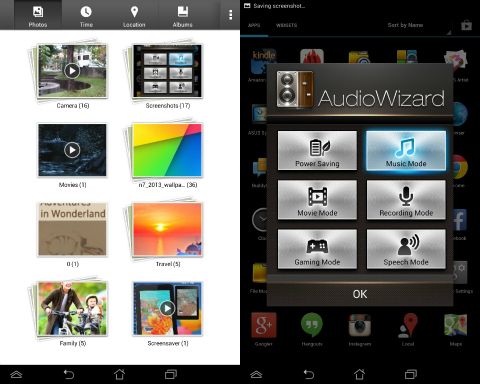 ASUS included their own apps as well like the ASUS Artist, ASUS Splendid, ASUS Studio, ASUS To-Do, ASUS Story, ASUS WebStorage, and other apps like the AudioWizard, BuddyBuzz, Mirror, Parental Lock, Zinio, etc. This leaves your 16GB MeMO HD 7 with a total of 11.82GB of usable internal storage. Good thing there’s support for up to 32GB microSD card should there be a shortage in memory.

Given that the HD 7 has a good screen shows that the tablet is a great multimedia companion. It can easily play Full HD videos without any problem. We recommend using MX Player to make sure that most formats can be played. 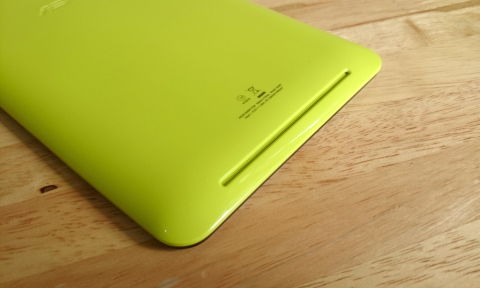 In addition, the speaker placed at the back is capable of producing clear and rich sounds with sufficient amount of bass.

The HD 7 is equipped with a 5 megapixel camera (without LED flash) and a 1.2 megapixel front-facing camera. At this point, the HD 7 fares better than the camera-lacking Nexus 7 2012. 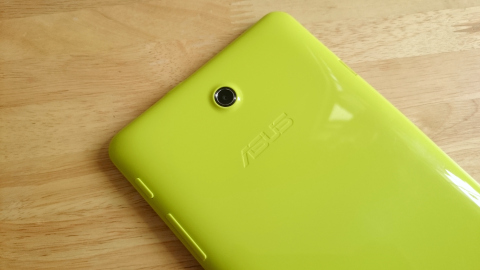 We don’t expect much from a camera of this caliber but it can produce images decent enough to be uploaded to social media sites. ASUS included a slew of camera features as well like Panorama, Beautification, HDR, multiple scene modes, as well as filters. Take a look at the sample shots below:

As for its video recording prowess, it is capable of shooting videos of up to 1080p at 30fps. Filters can be applied as well while recording.

Take a look at the sample video below:

Powering the device is a quad-core 1.2GHz MediaTek MTK 8125 CPU, 1GB of RAM and Android 4.2.2 Jellybean. Although specs are good for its price, it isn’t as zippy as we expect it to be. Don’t get us wrong though, it’s not plagued with lags but you’ll definitely notice some delay in UI transitions and animations. Big apps tend to launch slower as well. 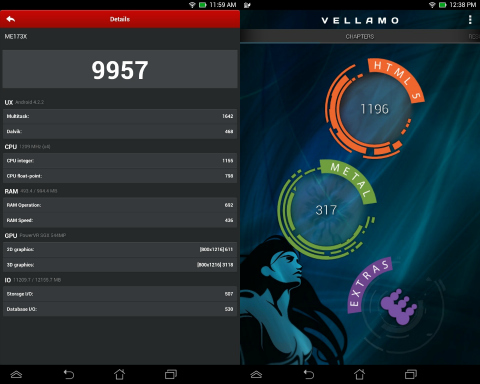 We played Dead Trigger 2 on it in High Settings. It’s very playable but frame rates are not that smooth. Therefore we recommend setting games or apps in low graphic settings for a more enjoyable game play.

As for benchmarks take a look at the results below:

The Memo Pad HD 7 comes with a 3,950mAh battery which ASUS claims to last for 10 hours. Our regular use which consists of heavy SNS browsing and light gaming provided up to 10 to 11 hours of battery life. You can actually get more if you use the Power Saver feature and customize how it saves battery according to your preference. We also played a 1080p video on loop in Airplane mode with 50% brightness and 0% volume and the result is a good 10 hours worth of movie playback.

To sum it up, the HD 7 is not aimed at heavy users and gamers but at casual users who just want a very capable tablet that can be used to browse social networks, take decent photos, read e-books on the go, watch movies, and play less graphic-intensive apps. With its price tag starting at Php6,995 for the 8GB and Php8,995 for the 16GB, the ASUS MeMO Pad HD 7 is a great offering for those who are in a budget for a 7-inch slate.

What we didn’t like:
*Backside is prone to scratches
*Edges slightly protrude
*Slight delays in UI transitions and animations