Tablets have evolved from being just a go-to device for media consumption into an all-in-one device; thanks to the integration of voice and SMS functionalities. Asus continues to bank on that formula by releasing tablets with phone features like the Asus FonePad 8 (FE380CG) which we will review in this post. 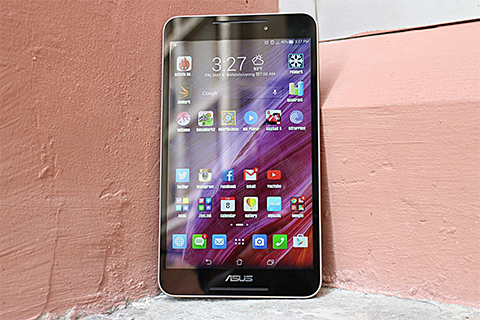 The FonePad 8 follows the same straightforward design scheme of the FonePads we’ve seen in the past. Together with its all-plastic make, the FonePad 8 isn’t exactly a head-turner, but it does not feel like a cheap slab of plastic either.

Asus did a decent job of maintaining a hint of class to an otherwise all-plastic slate thanks to some thoughtful design and material choices. The gold trim along the edges (on the black variant at least) adds some character to the tablet and helps in breaking the monotonous black paint job of the FonePad 8. 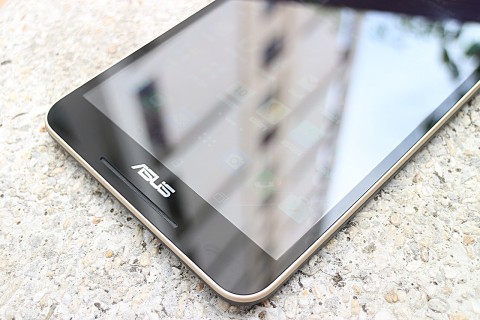 The FonePad 8’s WXGA (that’s 1280 x 800 for the non-geeks) eight inch screen is sandwiched in between two front-facing speakers and is bordered by black bezels with acceptable thickness on each side.

The front panel tapers slightly down to the back portion which creates an illusion that the FonePad 8 is a tad thinner than what its actual measurement suggests. It terminates to a textured back panel with a chrome “Asus” logo in the middle and 5-megapixel rear camera on the top-left corner. 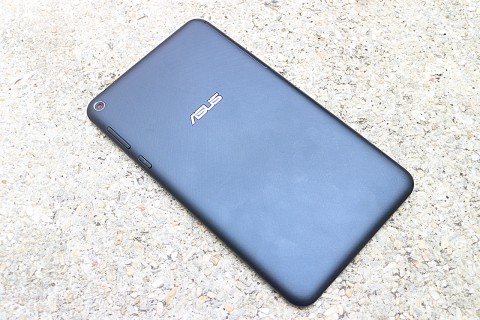 The placement of the three physical buttons are where you’d typically expect them to be (on the right flank if the tablet is facing you), but are slightly leaning towards the back side unlike most buttons that are placed around the edge.

The two other external components, namely the microUSB port and the headphone jack, are located at the top and are slightly off-kilter towards the right side.

Display was not a strong suit of the FonePad 7, on this version at least. This is primarily because of the use run of the mill components like the no-frill LCD panel couple with WSVGA (1024×600) resolution in an effort to keep the price competitive, but arguably at the cost of decent viewing experience. Luckily, Asus eschewed those borderline pedestrian components on the FonePad 8, and instead use an 8-inch IPS panel that pushes 1280 x 800 pixels, resulting into a more respectable pixel density of 189ppi. That kind of pixel density pales in comparison to other high-resolution 8-inchers like the Samsung Galaxy Tab S 8.4 and the iPad Mini 2/3, but considering that this tablet doesn’t cost an arm and a leg, we feel that its target market will not mind this minor trade off.

Another noteworthy addition to the FonePad 8’s feature set is the two front-mounted speakers on the top and bottom portion of the tablet’s screen. The overall sound output is a little too soft for our liking, but the orientation of the speaker really helped in making this minor misstep a little less glaring.

Despite of these notable improvements, however, there are still some aspects of the FonePad 8’s display that could use some refinement. The outdoor legibility of the screen, for one, needs a bit of an overhaul as we often find ourselves searching for the nearest shade whenever we have to pull out the tablet outdoors. 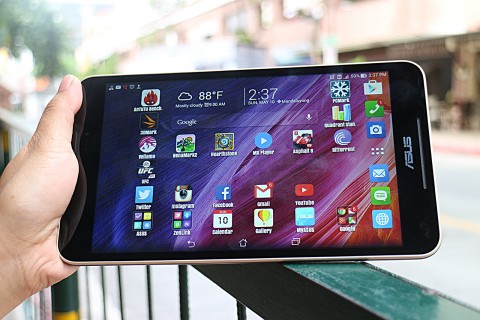 Although the color of the images we viewed on the FonePad 8 doesn’t look dull, we observed that the color accuracy was little off by a nominal margin. It’s not something that would immediately jump out to average users, but will certainly be visible to nitpicky users who pay attention to these tiny details.

Android KitKat version 4.4.2 was the chosen OS flavor for the FonePad 8, masked underneath Asus’ homebrewed interface called Zen UI. Casual users wouldn’t really mind the last-gen version of the OS, but for those who are, we’re glad to report that some of the new software-based features that we observed on the Zenfone 2 are also present on the FonePad 8. 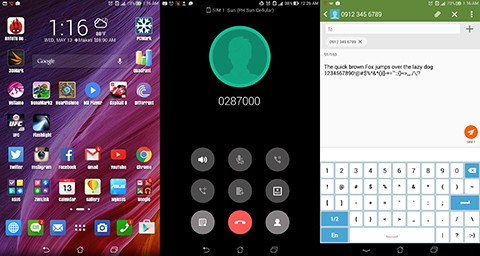 Some of these additions include the shortcut (long-press on an empty portion of the homescreen) to personalize almost every aspect of the home screen, allowing users to change icons, fonts and scroll animation.

Of course, there’s still no substitute for having Android Lollipop on this tablet, so hopefully Asus rolls out an update for it in the coming months.

The FonePad 8, on paper at least, offers 16GB of internal storage. However, a quick check on the system settings revealed that only 11.49GB is accessible to the users, as the 4.51GB is reserved for the system. Prior to installing our usual set of apps (benchmark software and games) and copying a 720p movie for our battery benchmark which in all amounts to roughly around 4.5GB, the settings show that users will have around 9GB worth of room on their tablet to store their files and install apps on their tablet.

This means that more or less 3GB, or roughly 20% of the tablet’s total usable storage capacity is occupied by a combination of pre-installed Asus apps and third-party software. The latter mostly comprises of useful apps like social media apps, Google Chrome, and other Google apps which therefore saves the users from having to download it themselves.

We didn’t encounter any issues on all of the third-party apps that we installed on the FonePad 8, albeit we were never able to figure out why it can’t run 3DMark Icestorm (any of the three available modes) and PCMark Work Performance benchmark tests. 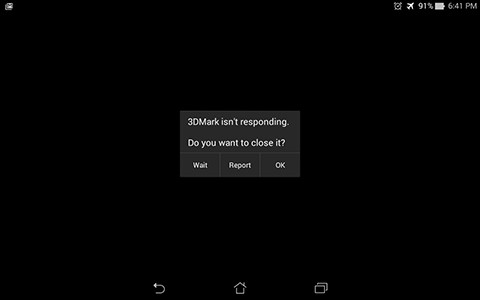 We eventually got the latter to work, but we weren’t able to run 3DMark Icestorm on this device even after several crack at it. This might be a compatibility issue with Intel processors, but luckily it didn’t manifest on any of the other apps that we installed on the Fonepad 8.

Ever since Asus’ first foray in to the FonePad lineup, the company has always opted for an Intel Atom processor to power their tablet/smartphone hybrid device. That trend continues with the latest FonePad 8 which is powered by a quad-core Intel Atom Z3530 processor.

The Z3530 is one of the four system-on-chips that were launched under the Moorefield (Z35xx) family. It’s the most modest of the four 64-bit processors under the lineup with each of its four cores clocked at 1.33Ghz with an additional four threads and 2MB of Cache. 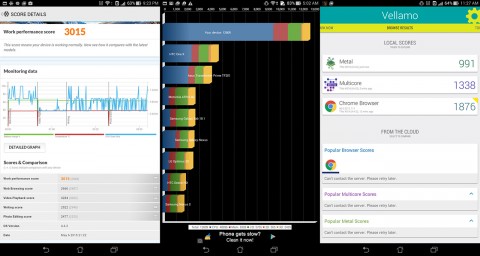 Handling most of graphics-related duties is delegated to the PowerVR G6430 GPU made by the company Imagination Technologies. It’s the same GPU that’s integrated inside the Apple A7 SoC, the Cupertino firm’s first 64-bit processor that was launched alongside the Apple iPhone 5S and later used on the iPad Mini 2 and its successor.

In terms of real-world use, the Z3530 performs admirably despite of what its meek specification might suggest. There was no noticeable lags when were navigating through the various menus and accessing different apps. 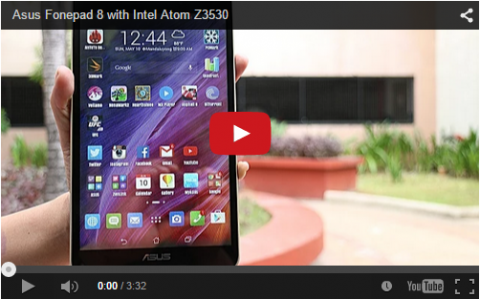 The same can be said when playing resource-heavy 3D games on the tablet and during multitasking. Having multiple tabs open on Google Chrome also doesn’t seem to bother the FonePad 8 one bit and we were able to transition between the various tabs without a hitch.

The scores that we got from our usual synthetic benchmark tests seem to back up our experience, and although it pales in comparison to other higher-end devices, the results that we got are still at par with most mid-range devices we’ve seen in recent times.

Like the display, camera was also not a source of pride for the FonePad lineup. However, it’s worth pointing out that imaging prowess has never been a bright spot for most slates, high-end or otherwise, as cameras on tablets are merely there to be more of an add-on-feature rather than a legit component that manufacturers can actually brag about during product launches.

With that being said, we were not expecting a whole lot out the FonePad 8’s 5MP rear camera, or the front-facing 2-megapixel shooter for that matter. Surprisingly, the two cameras surpassed our modest expectations and performed quite admirably, particularly in well-lit conditions.

The exposure, white balance and focus were, most of the time, spot on. In addition, the rear camera also gets a nod from us in terms of color reproduction and overall image sharpness. 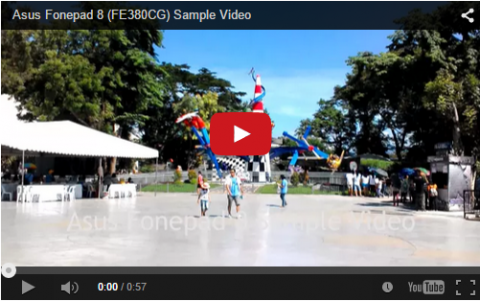 As with other devices that Asus has released in recent times, the FonePad 8 is equipped with the company’s own software-based camera enhancement tool dubbed as the PixelMaster. The PixelMaster offers a wealth of customization to users like the ability to shoot pictures with shallow depth of field, and remove unwanted objects in the picture with an option called Smart Remove. 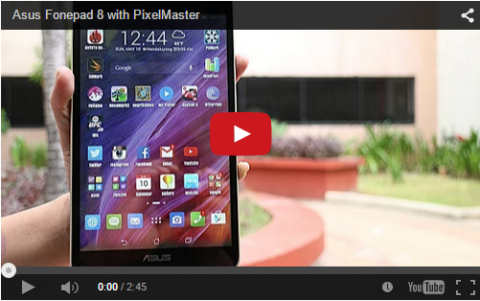 A more detailed look of what the Asus PixelMaster has to offer can be found here.

Phone functionality integrated in a tablet form factor is arguably the main selling point of the FonePad series, and Asus seems to be doing pretty well in this segment as suggested by the regular release of new and improved iterations every year.

That same formula extends to the FonePad 8 which can accommodate up to two SIM cards that can be used to place and receive voice calls, as well as send and receive SMS. In addition to that, the tablet supports 3G connectivity on one of its SIM card slots, allowing users to browse the internet without the need connect to a Wi-Fi connection. 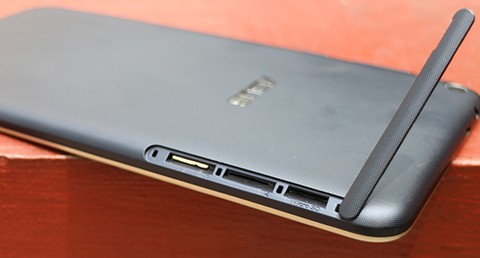 Regardless of which network we’re using and which SIM slot we popped our card in to, all of these aforementioned features worked as advertised. The voice calls that we received and placed on the Fonepad 8 were clear, SMS were and sent and received in a timely manner, and we were able to browse the web using a data-provisioned SIM card without any hitch.

In their internal testing, Asus claims that the Fonepad 8 can last up to 12 hours on a single charge. We’re happy to report that the tablet can indeed provide that mileage based on the result we got from our battery benchmark test. 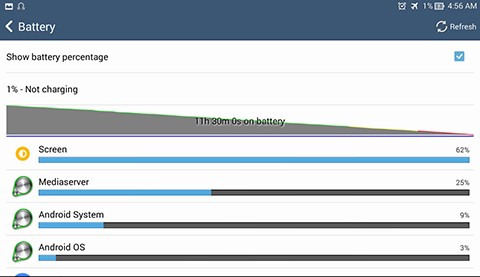 Our standard battery test involves looping a 720p video while the device is set to airplane mode. The brightness and sound were adjusted using the media player of our choice (MX Player in this case) and are both set to 50% with an earphone attached to the device. The Asus Fonepad 8 lasted for 11 hours and 30 minutes in the said test, as seen in the screenshot above.

Meanwhile, the Fonepad 8 lasted for 8 hours and 9 minutes when we ran the PCMark Work Battery Life test on it.

As for the charging time, it takes roughly around 3 hours to fully charge the Fonepad 8 from drain state.

Asus has taken commendable strides to keep improving their Fonepad lineup, and the Fonepad 8 is a true testament to that. The company has kept all of the features that made the Fonepad popular among tablet users and has revamped some of the features to make it more competitive in the market.

The larger and more pixel-packed display, not to mention the front-mounted speakers, are a welcome addition to the Fonepad 8’s feature set. Furthermore, the use of Z3530 also ensures that popular apps will seamlessly run on the device, and help in keeping things smooth and lag free.

To conclude, the Asus Fonepad 8 is a well-rounded device that offers decent performance, ample screen size with decent viewing angles, as well as phone functionality complete with 3G connectivity. And although we find that its Php11,995 price tag is a little on steep side, we think that it’s still worth it for what it has to offer.