The ASUS G11 gaming desktop has been known to offer capable performance without having to overspend thanks to the internal configurations the company has put together. What we have here is the G11CD made up of a Core i7 processor, NVIDIA’s GTX 1070 graphics, 8GB RAM, and 1TB of HDD storage encased in a well-designed shell.

Join us in this review and find out if it can handle the tasks we’ll throw its way and what exactly it can offer its users. 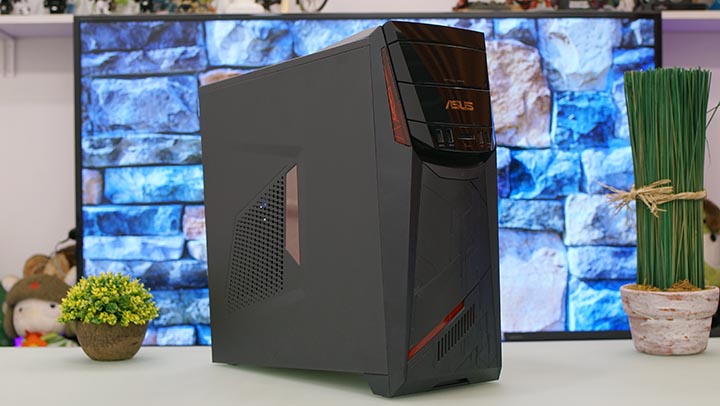 This mid-tower ASUS G11CD stands at only 16.6 inches tall and is 6.9 inches wide making it fall under the compact category as compared to other rigs. 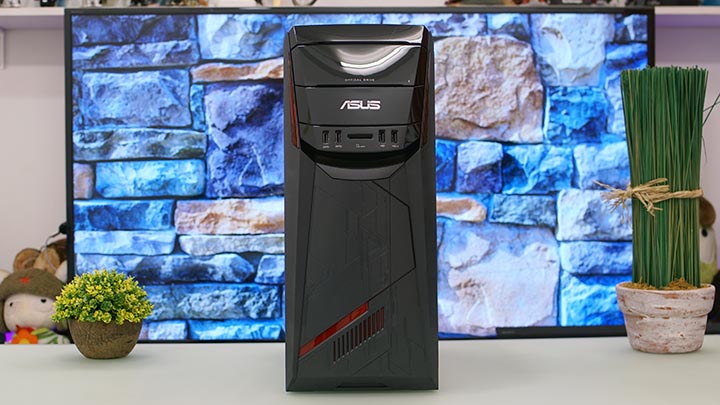 The CPU tower comprises mostly of a black casing with matte finish commonly seen on gaming PCs. The only part here with a glossy area is the main ‘face’ which houses the optical drive, front ports, and the card reader. 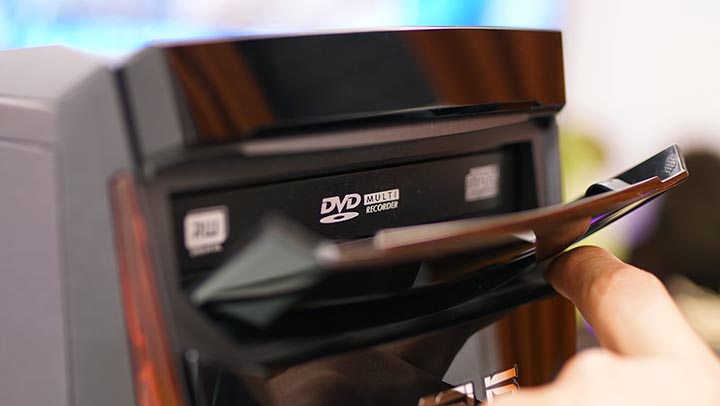 The optical DVD drive is hidden behind a cover that you have to push to flip out. 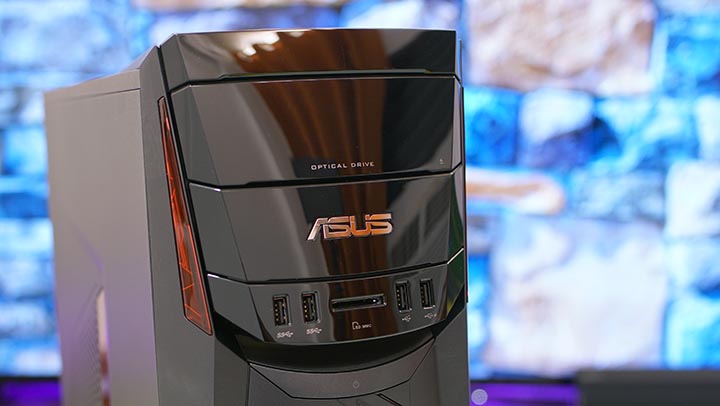 The glossy face has segmented parts almost looking close to the patterns found on a certain insect’s (or alien’s?) back. 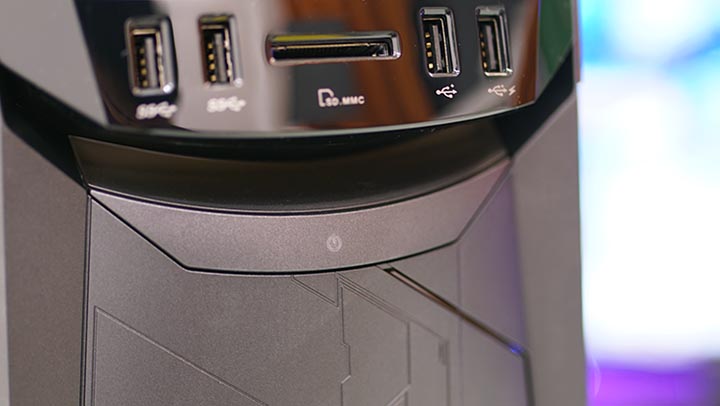 The main power button is just below the ports and is molded to fit and blend seamlessly with the general design of the G11. 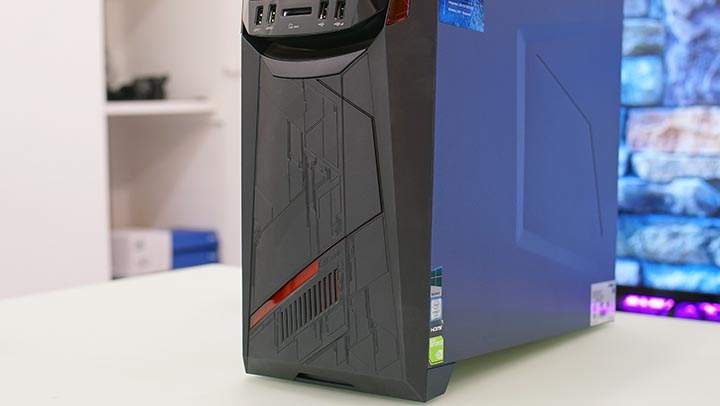 The science fiction-ish design continues to the lower area of its body and features lighting accents. Also noticeable here is that the tower is tilted upwards due to the front stand. Checking under reveals that it’s mainly for show as there are no fans or exhausts found here. 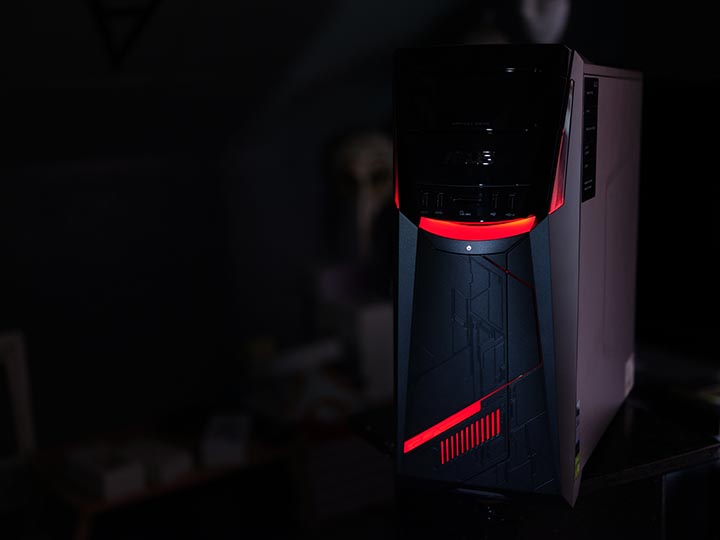 Being a gaming machine, ASUS incorporated ambient lighting that has an extent of personalization. When powered up, a couple of red LED accentuate the rig surrounding the glossy area up top and all the way to the bottom. Do take note, though, that only the light above the power button can be changed to other colors and can be controlled using the ASUS Aegis II software. 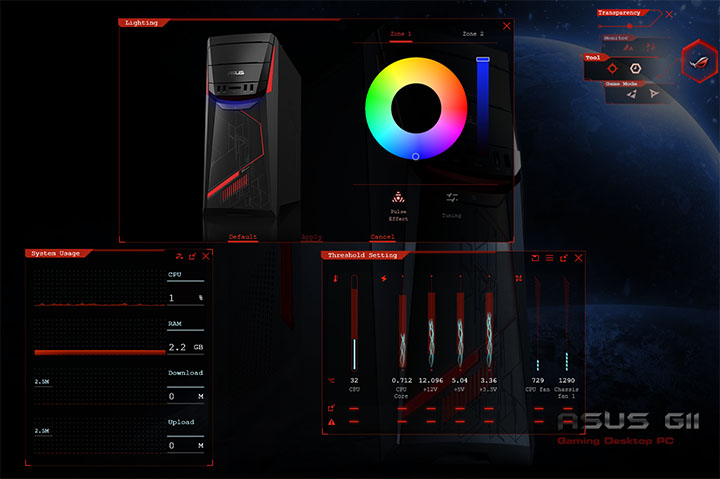 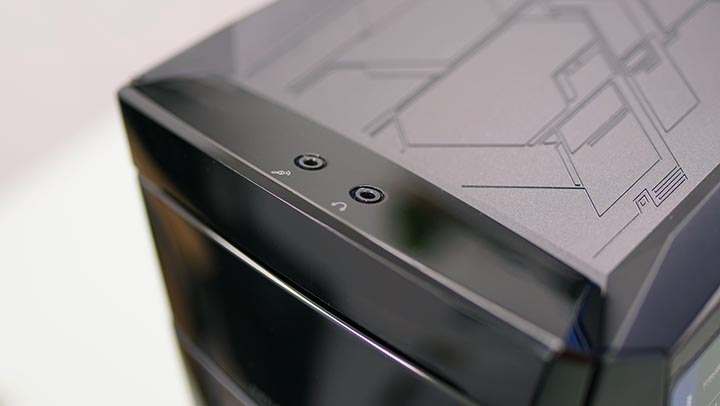 Meanwhile, two extra ports are found up top for the microphone and headphones. 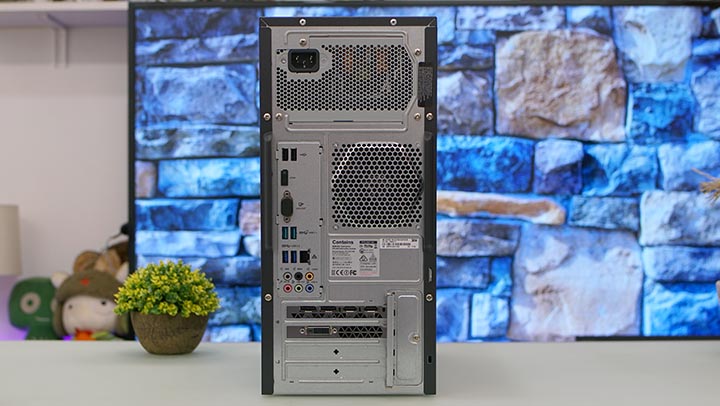 Turning it around reveals all the other connectivity options for the G11. Here we have two USB 2.0 ports, HDMI, VGA, two USB 3.1, two USB 3.0, and Ethernet. Sadly, there’s no dedicated slot for a USB Type C. The graphics card just below them hosts a couple of additional ports as well. 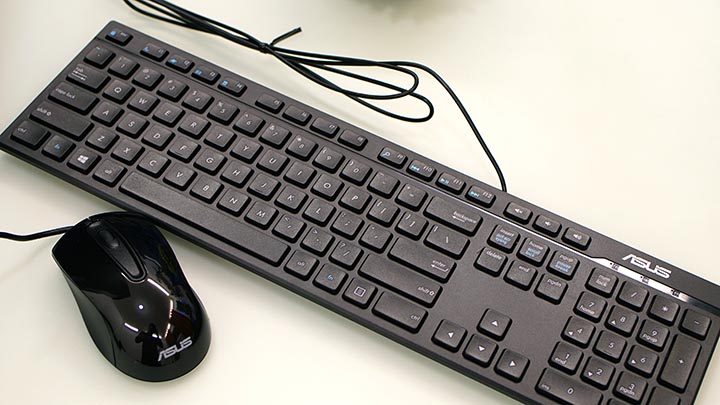 The G11 bundle comes complete with its own keyboard and mouse from ASUS. All you need is a display and you’re ready to game out of the box. We opened the G11 as we were curious to see how it is set up inside and we were a bit surprised to see wires dangling and scattered. We’re not sure if this is really how the company arranged it to be but it sure is a different story when you compare it with the CPU’s neat exterior. 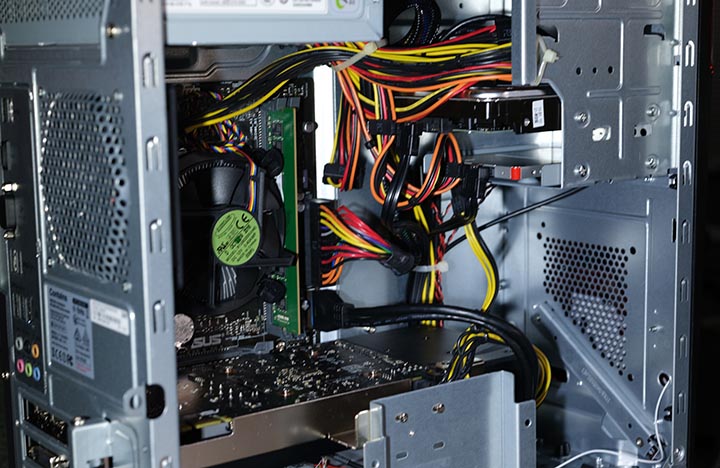 We also found out that the 3.5-inch drive bay is maxed out at two slots which are already occupied by the 1TB HDD and 128GB SSD. In short, users can no longer expand the storage unless you remove a current resident. There are also no sliding trays here so you still need to pop both the side covers off to gain access to its drives.

The G11CD’s processor is made of a 14nm manufacturing process and has a total of 4 cores. It is then partnered to 16GB of DDR4 RAM which contributes to its overall performance and takes care of the multitasking processes. Storage space is ample at 1TB HDD. To add to that, there’s also a 128GB SSD to make sure boot times are fast. 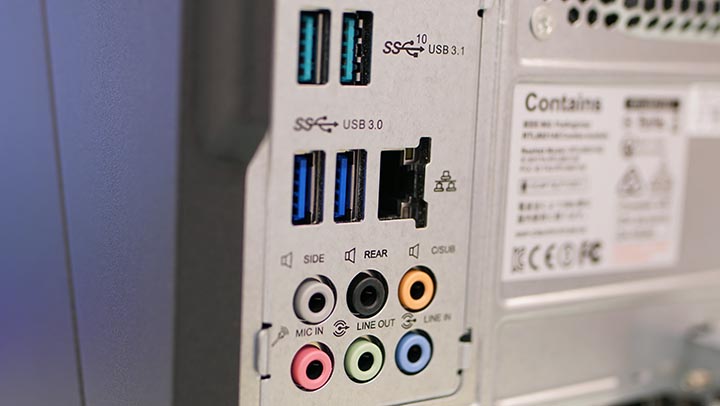 Although it couldn’t be overclocked, the Core i7-6700 CPU performed really well during our time with it. We used it to edit a number of videos using Adobe Premiere and Adobe After Effects, browsed the internet, and of course, played games on it with numerous titles.

There are noticeable frame drops during the busy parts of some games but we didn’t encounter anything that would halt or disturb our time of playing thanks to its GTX 1070 GPU.

We also noticed that the G11CD has little to no sound when it’s running. It’s really quiet that even my laptop produces a whirring sound louder than this desktop. Sound output is rated at 48dB and is practically unheard inside a quiet room.

Just like other devices built for performance, we subjected the G11 to our set of benchmarking apps to give you an idea how much it could put out or as a point of comparison against other PCs. Below are the results.

With the G11CD, ASUS is definitely targeting gamers who are looking for a machine with a bit of muscle for crunching demanding games but aren’t willing to overspend for top-of-the-line specs. 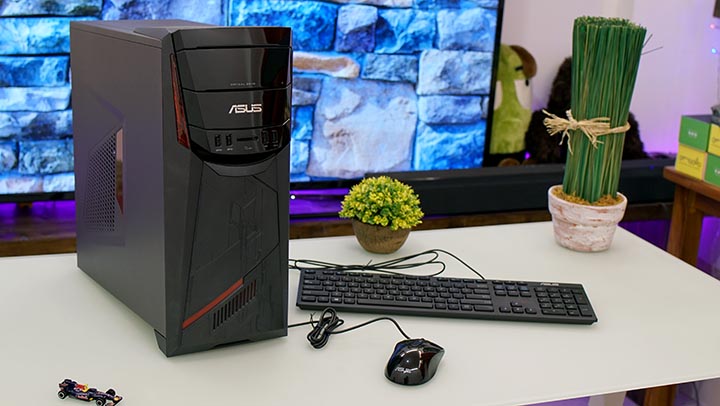 The ASUS G11CD is priced at Php59,995 and combines the output of Intel’s Core i7 processor, the graphics power of GTX 1070, the ample 16GB RAM, spacious 1TB HDD, and the fast performance of its SSD. 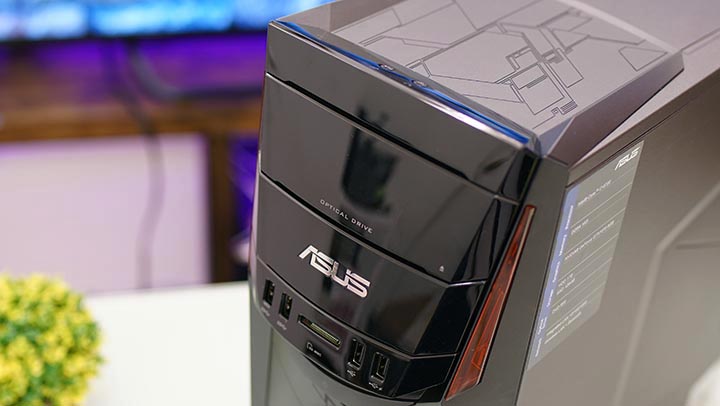 It does have its own shortcomings, if we may use such a word since it has a limited slot for adding more space and comes with a not-so-presentable interior — opposite of what it looks like outside.