Power, beauty, portability — these are the things that most people are looking for in a laptop. However, most laptops in the market don’t have it all as brands need to sacrifice one advantage for the other. Except for a few laptops though that seems to have almost everything, like the ASUS ZenBook 14 (UX433). 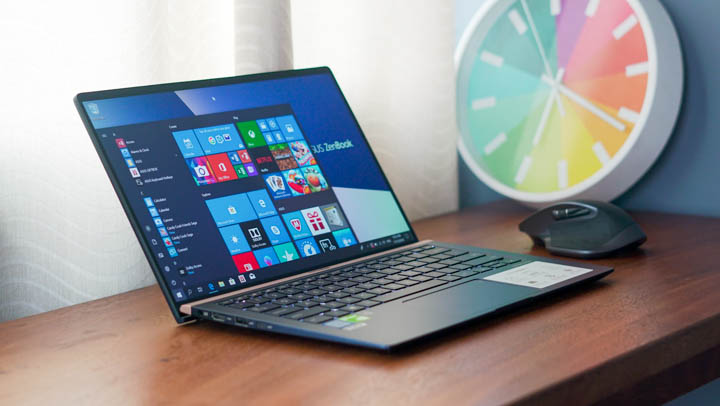 The ZenBook 14 definitely has a lot to offer in terms of looks. For starters, it has a metal chassis with a concentric circle finish on the top lid and matte on the inside. The Royal Blue color isn’t new but still an attractive color, while the gold accents perfectly represent its premium status. 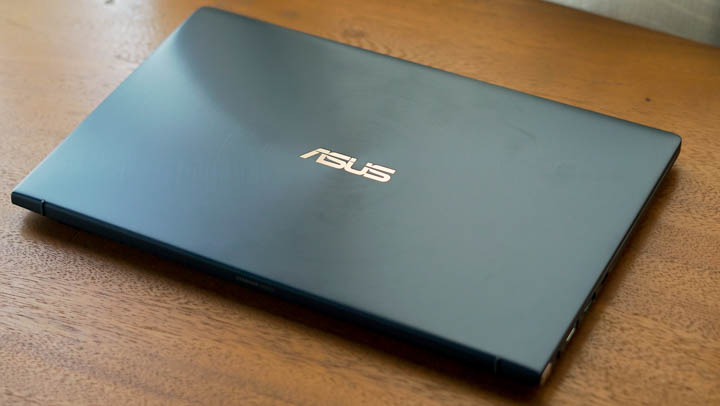 When closed, the ZenBook 14 feels different from previous ZenBooks due to the flat edges, instead of tapered, which makes it feel boxy. Don’t get me wrong though as it is still relatively thin and nice to carry around. 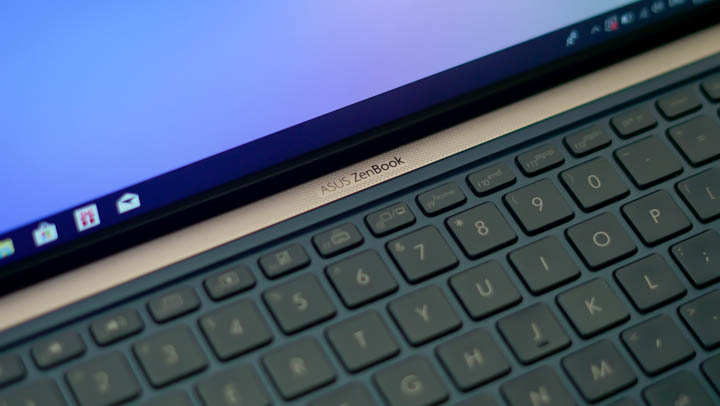 On the right are the microSD card slot, USB 2.0 Type-A, and the headphone/microphone combo. 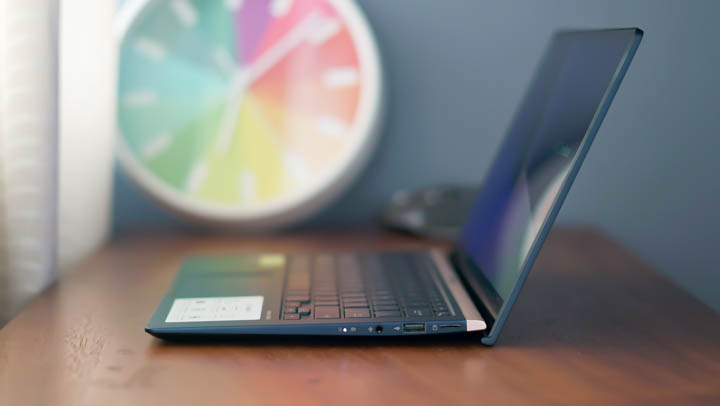 Open the lid, which is easy to do thanks to the generous indent located at the edge of the touchpad, and you’ll be greeted by the 14-inch screen with thin bezels. We like that ASUS still placed the webcam at the top and not anywhere else considering the small space to work with. 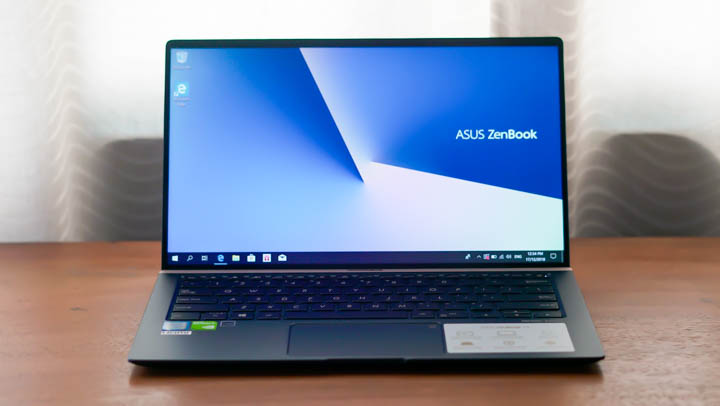 The keyboard is backlit with 3 levels of brightness while the keys are evenly spaced and don’t feel cramped, except for the dedicated up and down arrow keys. It’s not that stressful on the wrist as the hinge automatically provides a bit of inclination when you open the lid. The keys are tactile but quiet and firm. The 1.4mm travel feels too shallow for me though, but one can easily get used to it. 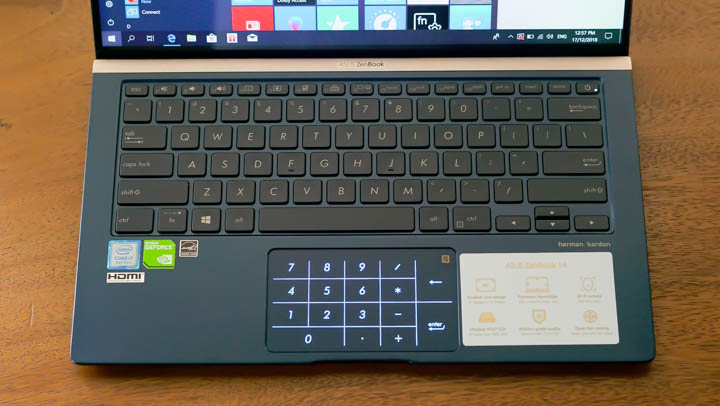 As for the touchpad, it has decent size and is smooth and responsive. The left and right click buttons are also firm and clicky. But that’s not all though as it has a special feature that most laptops in the market don’t have — just press on the NumPad icon at the top right corner and it will show a virtual NumPad. Do note that this is not a second screen like the one found on the ZenBook Pro but more like inspired by the virtual NumPad found on the ROG Zephyrus. 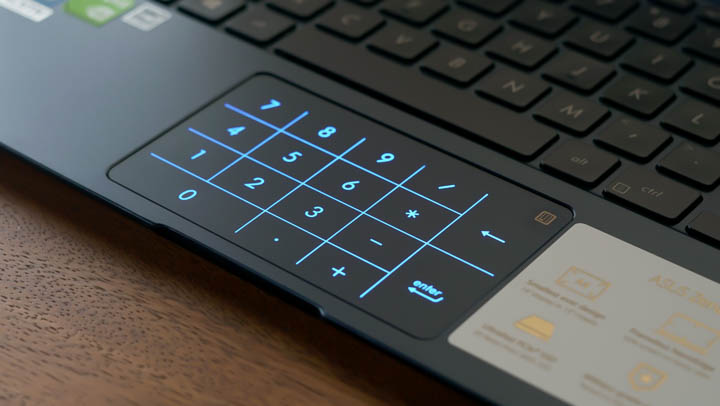 The touchpad functions still work while the NumPad is on, while the light automatically switches off when not in use to save on battery. It feels weird though as it doesn’t provide any haptic feedback when we’re pressing some digits. It’s still a helpful tool though especially if you really need your NumPad. 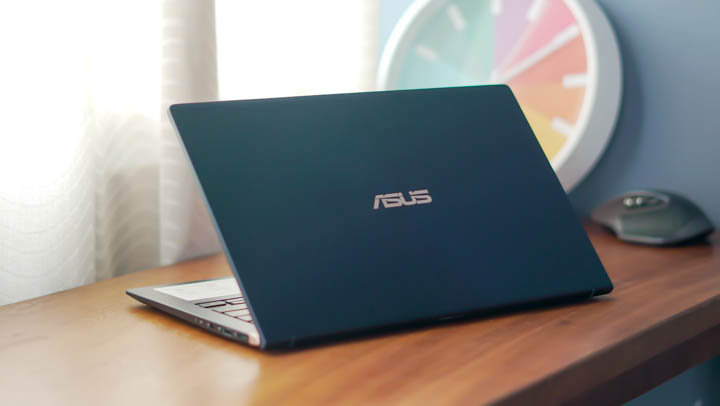 When it comes to its overall build and design, we cannot really complain as it is sturdy, looks great, easy to lug around, and small enough to fit any backpack.

One of our favorite features of the ZenBook 14 is its display. By trimming the bezels, they managed to fit a 14-inch screen in a small chassis. It also resulted in a more immersive screen as it looks wider, making it perfect for watching videos. The Full HD resolution is decent for its size and has good colors and wide viewing angles. Sadly, it’s not a touchscreen. 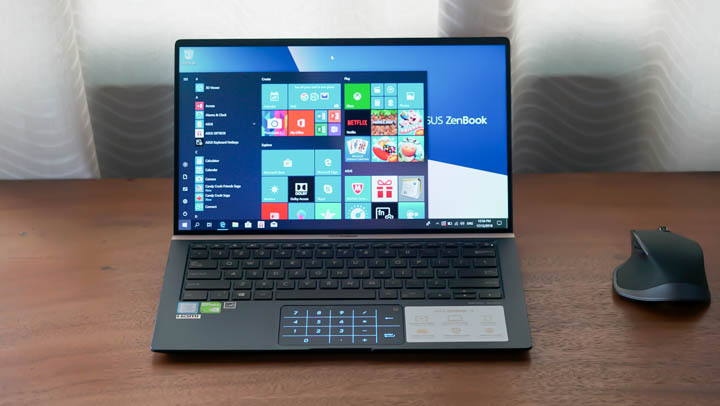 When it comes to audio, the ZenBook 14 has two speakers located at the bottom of the chassis by the front edge of the palm rest. This way, the sound is blasted towards the user. The speakers can get really loud which is good enough for a group watching YouTube or Netflix. The trebles are crisp to the point that it becomes tinny, although there’s some bass on it which can improve the listening experience.

Powering the ZenBook 14 is a Whiskey Lake Intel Core i7-8565U CPU, Intel UHD 620 graphics, NVIDIA GeForce MX150 GPU, 16GB of RAM, 512GB NVMe SSD storage, and Windows 10 Home. It can easily handle productivity tasks such as writing articles, surfing the web, photo editing. and light video editing. It also maintained a relatively cool CPU temperature of 46-degrees C. Warming can be felt at the bottom but not too much to cause discomfort when working on it from our lap. 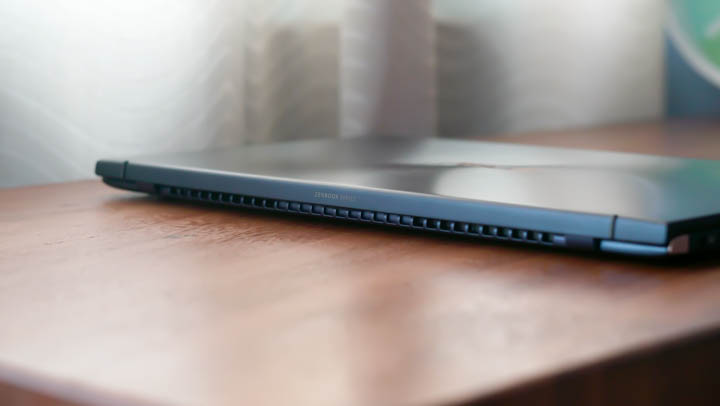 Gaming-wise, it should be run some of the light titles out there but don’t expect high frame-rates. We played Dying Light on it and we were able to get an average of 28fps in HD resolution in Low to Medium graphics settings. Temperature spiked up to 72-deg C for the CPU and 66-deg C for the GPU. The fans started to become audible at this point but just produced a low steady hum.

As for the benchmark scores, we’re getting decent numbers for a laptop of this class. Check them out below.

Since this is a laptop aimed at productivity, we expect the ZenBook 14 to last us the whole work day, and it certainly did. It was able to get us around 8 to 9 hours of continuous use when constantly connected to WiFi, brightness set to 50-75%, and power mode set to better performance. Charging, on the other hand, took 2 hours. So far, we like the mileage we’re getting on the ZenBook 14.

The ASUS ZenBook 14 is one of those laptops you pick if you want something for productivity yet portable and attractive at the same time. It has a nice display with slim bezels, premium chassis, solid speakers, and packs decent performance and respectable battery life. As for the virtual NumPad, it’s something we rarely used, but it’s cool and nice to have around. 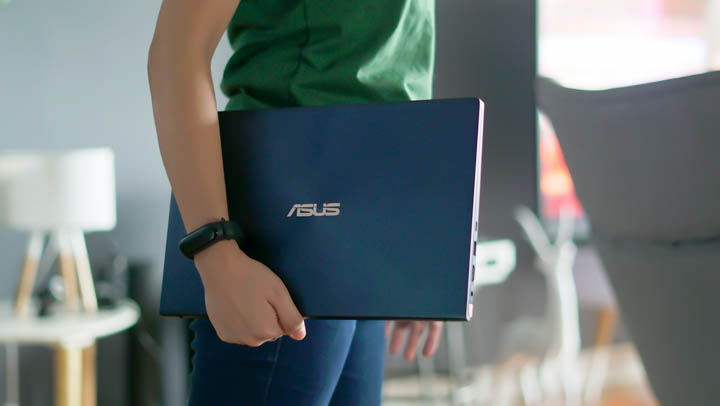 As for the price, it’s expensive at PHP 77,995 and is at the same price range as the base Apple MacBook Pro, but you’re getting more power, storage, and ports. So if you’re looking for a premium workhorse that’s easy to carry around, then get the ZenBook 14.

What we didn’t:
• No Thunderbolt 3
• No touchscreen