We know that some of you may be having a hard time choosing between the Samsung ATIV Smart PC and Asus VivoTab RT. To help you decide which convertible tablet PC to pick, we’ve prepared a table comparing both devices specs with its corresponding price. Just by merely judging each device based on how many green cells a column has, one can tell that the Samsung ATIV Smart PC is a slightly better choice as opposed to the Asus Vivo Tab RT. If anything, the ASUS VivoTab RT’s only two significant advantages over the other is its insanely bright display and its keyboard dock which somewhat doubles the battery life of the tablet. However, by picking VivoTab RT, you’re missing out on two USB ports and you only have half as much storage capacity. 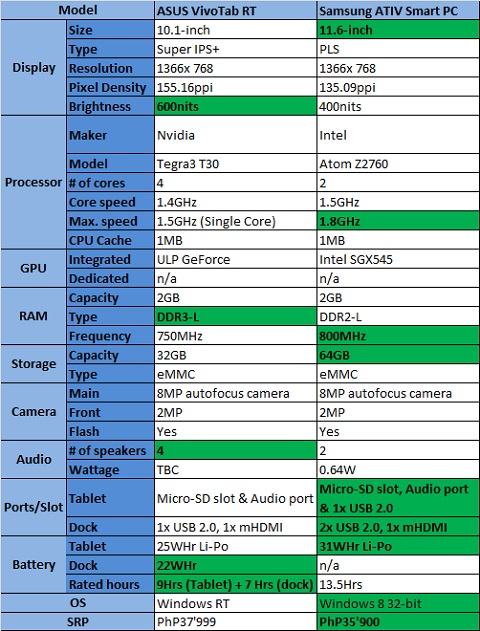 Then there’s also the difference in the operating system. There’s a big difference between the two OS which we plan to discuss on our future post. For now, let’s just say that we prefer having the Windows 8 over the Windows RT because it allows for a better and more familiar experience as compared to the RT.

In terms of pricing (based on VillMan’s pricing), the Samsung ATIV Smart PC is slightly cheaper than the Asus Vivo Tab RT. It’s not that significant, but considering that you have twice as much storage capacity and Windows 8 for an OS (which BTW is more costly to license than Windows RT) with the Samsung ATIV Smart PC, we can definitely say that you’re better off picking this one than the Asus Vivo Tab RT.

I have been surfing online more than 2 hours today,
yet I never found any interesting article like yours. It’s pretty worth enough for me. Personally, if all web owners and bloggers made good content as you did, the internet will be a lot more useful than ever before.|
I could not refrain from commenting. Exceptionally well written!|
Would you be kind enough to send me your RSS feed link please?

Its the Asus Vivo Tab Smart that comes with the full Win8.Similarly spec’d with the RT version and is supposedly should come cheaper. Must be similarly priced with the Acer Iconia W510 but has the advantage of having double the storage.

The VivoTab Smart & VivoTab both runs Windows 8. The Vivotab RT runs Windows RT. Vivotab Smart’s SRP is ?26,000.00 with optional protective cover that can act as a stand and a bluetooth keyboard sold separately. The Vivotab comes with the keyboard dock.

hi lemonheads do you have any idea if the vivo tab smart is already locally available? how did you come up with the 26k tag price? is that a “guestimate”. I think il go for this over the acer iconia w5.and wonderin’ if its micro usb port can handle a 1tb Seagate using an adapter? Because my single core pine trail netbook can.

Both Asus tablets have NFC and GPS which Samsung Ativ Smart PC lacks.

there is an issue with Samsung about wifi connectivity. reviews says it’s buggy.

i don’t get the point of comparing a Win RT and a Win8 device.

I don’t get it either. Its not Just the price point that we are looking here. Its the specs. And its not right to compare and RT device with a full Windows 8 device IMHO.

I think an acer w700 tab will give you more value for your money….
TECH SPECS

I like this one as well, but it lacks a keyboard. The cradle is different from the keyboard, I’m wondering how much the keyboard would cost.

But for that price, is the keyboard dock (which many reviews have mentioned to be meh) already included?