Acer has put in more power to its Iconia Tab 8 with the new quad-core Atom Z3745 processor. That, plus a full HD 1080p IPS display and support for LTE at what could be.

Over at the Computex floors, Acer’s booth was filled with new products including the Iconia Tab 8 with its simple yet elegant design.

The body is made of some polycarbonate materials with a metallic finish with a thin and light profile. The full HD display looks pretty stunning and has very wide viewing angles.

The device is snappy and very responsive and while we attempted to run some benchmarks just to see how that Atom Z3745 fares, we were not allowed. Nevertheless, we’re confident that the scores would have been higher. 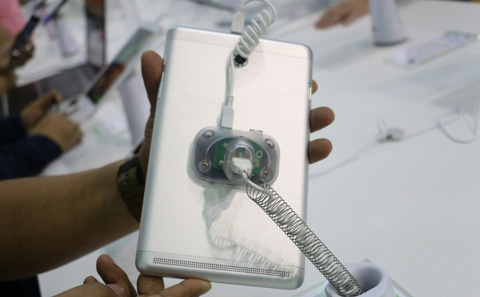 The LTE modem could have been installed separately from the Atom chip. And, it also got Kitkat right out of the box.

The battery capacity (or battery life) is the only information that have not been revealed yet.

Acer will start shipping the Iconia Tab 8 this July with a suggested retail price of €199 or roughly just under Php12,000.