Samsung introduced new 12.2-inch Galaxy Note Pro tablet here at CES 2014 in Las Vegas. It’s the biggest Android tablet for Samsung and we had a few minutes with it at their booth this morning.

Aside from the display size, the Galaxy Note Pro 12.2 did not change in design compared to the Samsung Galaxy Note 10.1 2014 Edition (see our review here). What Samsung did change was the TouchWiz UI. The new Window UX features a magazine-style interface. In fact, the dual-view feature of the older Galaxy Note tablets is now updated to accommodate 4 simultaneous windows in the panel.

The slot for the stylus is on the top right side along with the micro-SIM card slot and the microSD card slot. At the top side is the IR blaster.

Despite the huge size, the tablet actually feels light and still manageable. For those who prefer larger screens, the Note Pro should be perfect. It’s a monster of a tablet, both in hardware specs and in size. 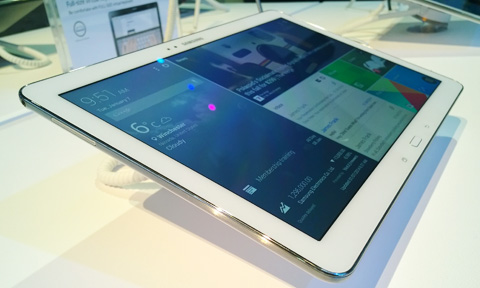 Samsung has not indicated the suggested retail price and the release date of the Galaxy Note Pro 12.2 but will update once we get more specifics.