HP’s top of the line ultrabooks are not the only products that will carry the “Spectre” name. In fact, it will represent HP’s latest All-In-One desktop PC, the HP Spectre One. The HP Spectre One is a 23.6-inch AIO desktop PC which is only 11.5 mm thick. It has an aluminum frame, a tilting 1920×1080 pixel display and runs Windows 8. However, it does not ship with a touch screen, TV tuner and an optical drive. The reason for doing so is to keep the device as thin as possible. To keep it finger-friendly with Windows 8, it will come bundled with a large and very familiar wireless multitouch-gesture touchpad.

Other features include four USB ports (two 3.0), WiFi 802.11n, HDMI, Beats Audio, Ethernet jack, memory card reader and optional discrete graphics and SSDs. HP also included an NFC chip inside the Spectre One to make it work with NFC-enabled smartphones – allowing you to automatically login to Windows 8 or stream content with just a tap. 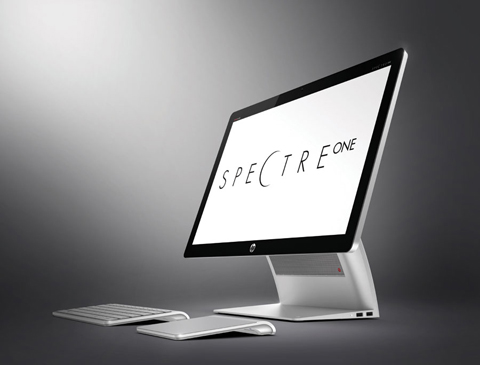 The HP Spectre One will be carrying Intel Ivy Bridge CPUs, 1GB Nvidia graphics card, a wireless keyboard and programmable NFC tags. It will arrive in the U.S. on November 14 and will cost $1,299 or almost Php54,000.

Article Under:hp all in one hp pc

The keyboard and trackpad is VERY similar to iMac. There are a lot of possible great ideas/concepts. Wala bang imagination and innovation ang HP design team?!

It has become a stereotypical notion to label a thing that has similar idea to a predominant and renowned one. The question is, did Mac acquired a patent for the idea of “all-in-one computer?” Also, take note that long before MAC invented the “all-in-one computer,” there has been few all-in-one desktops existing. The only problem why they weren’t as renowned as MAC’s similar computer is that MAC’s computer outweighed the specs and performance of these existing desktops, leaving them behind and disregarded for a while until now.

Its not the all-in-one desktop in question here, the design itself…

You’re on your way to be the next Samsung…

No thanks. HP hasn’t done anything in the past four years to show it has stopped making cheaply-built, defective products. Will pass.

Looks really like a Mac but i’d probably get this if it has the same performance with Mac.

….and still, people hates Apple for suing other companies

Somebody will get sued. lol

the same point i have been raising with the owner of the site. pero mukang ayaw or baka may ibang plans. i was thinking may they can associate the comment box to facebok, that will sure pull more readers.

haha what the hell!!!!! it should be named as HP-mac….. I guess Mac should sue all these copycats not only samsung

What the hell HP? What the hell… That base looks like a Macbook Air. That Keyboard and pad on top view looks like the one from mac. I see where you got your inspiration.

Wow, this could be the best gift ever. Nice job HP.