Tablet options nowadays are not as plenty compared to years ago. Probably because more people opt to just get a smartphone with a large screen instead. But when it comes to multimedia consumption and other creative work on the go, tablets are still the best. It’s good to know that companies like Huawei continue to produce tablets. One of them is the mid-range tablet the MatePad 10.4. Check out our full review below to find out if this is the one for you. 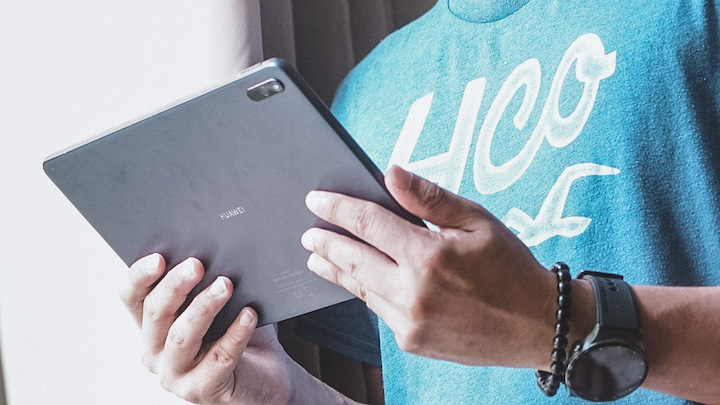 At first glance, the design is very identical to last year’s MatePad 10.4. It still has the all-aluminum frame in a matte finish, although it still attracts fingerprints. I find it even harder to clean compared to a glossy finish, so use a protective case if you are planning to buy this device. It’s sturdy, though, and feels like something that won’t bend easily. You don’t have color options though as it only comes in Midnight Grey. 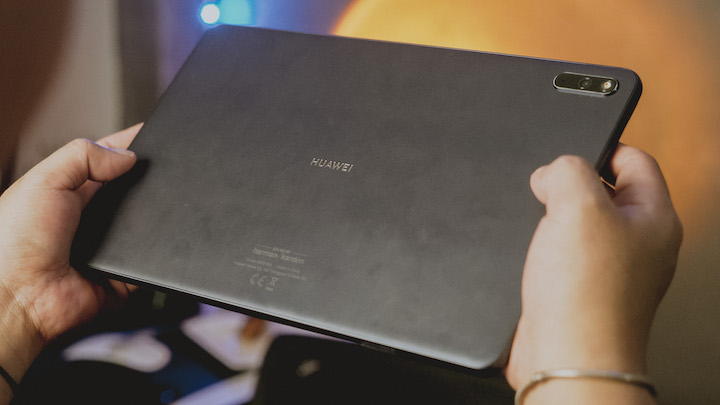 We have the 8MP camera with LED flash placed at the back, alongside a Huawei branding in the middle. For buttons, when held in landscape orientation, the volume buttons are situated on the top left corner alongside an array of microphones. On the left, we have the power/lock button and two speaker grilles. The buttons are plastic but solid and clicky. 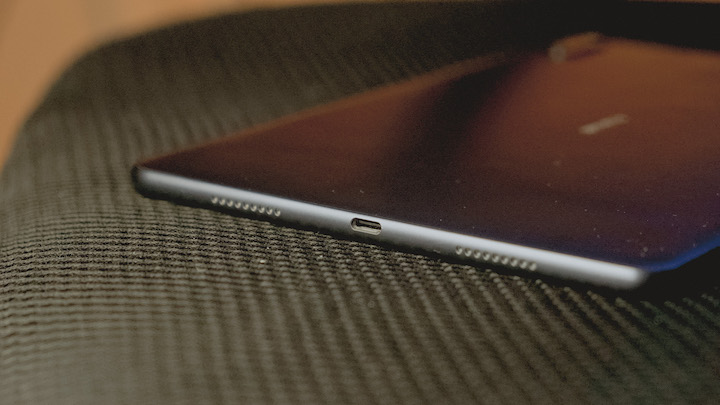 On the right side, we’ll find its USB Type-C port along with two more speakers. 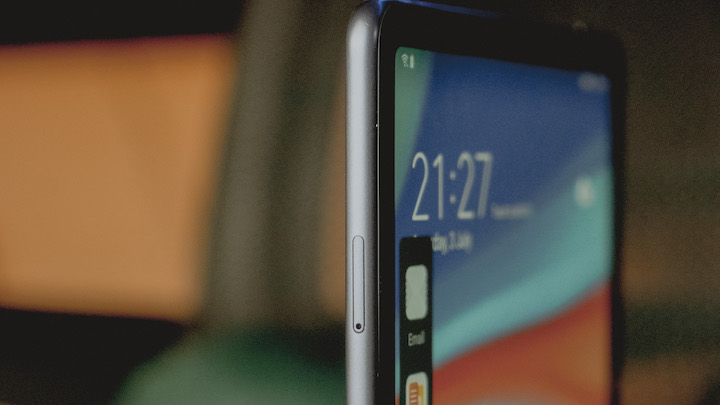 At the bottom is a slot for the microSD card. 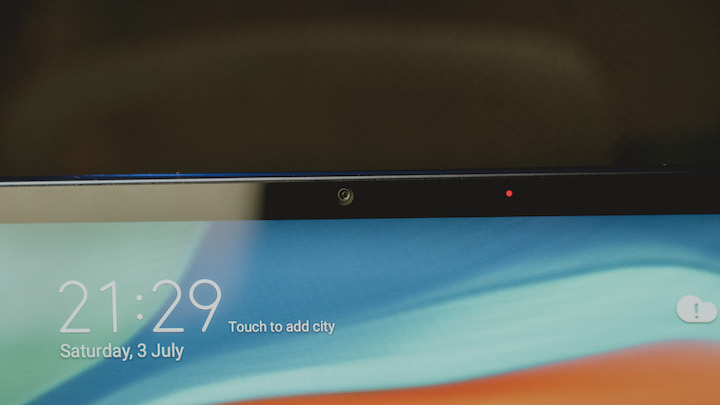 Finally, on the front above the display is the 8MP selfie camera and LED notification. 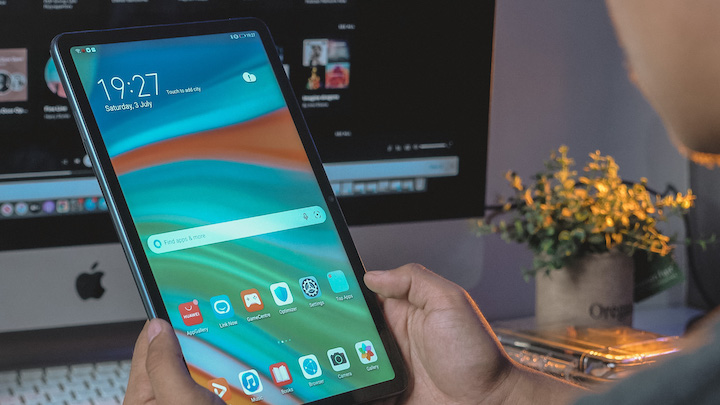 When it comes to the display, it’s got a 10.4-inch IPS LCD panel with a resolution of 2000 x 1200 or 225ppi. The colors are accurate and natural, with just the right amount of saturation. It may not have AMOLED but it has good contrast to produce darker blacks. The bezels are a bit think but it prevents us from accidentally touching the display. 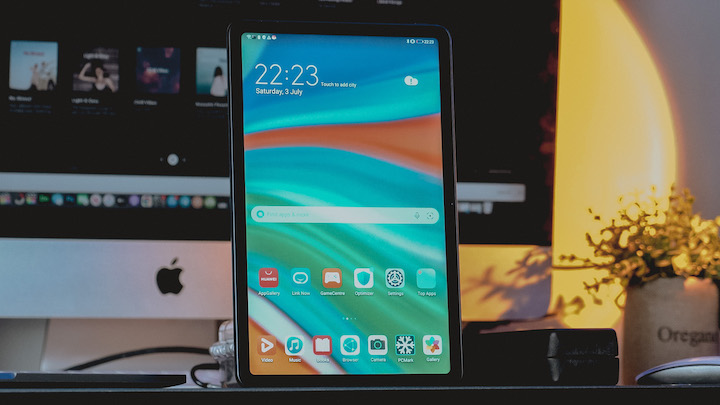 The screen is just right for many uses. For instance, I find myself reading articles and ebooks more often than on any device. I also love using the MatePad when I’m watching multimedia content for when I’m at home or traveling. Outdoor legibility is not as good as we prefer and could use some boost in brightness. 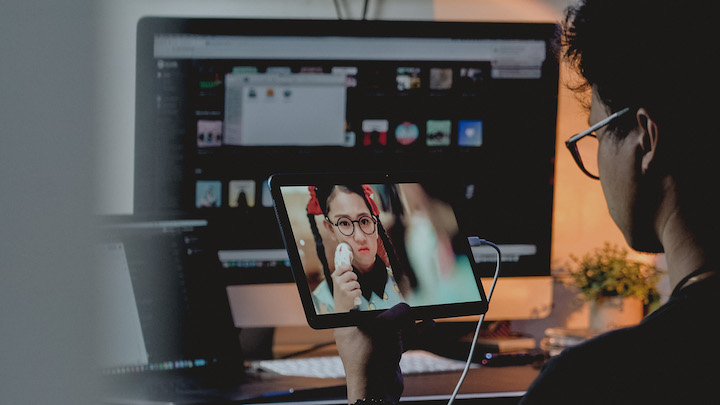 The MatePad 10.4 (2021)’s quad-speaker setup tuned by Harman/Kardon is loud enough to fill up the room at maximum volume. It produces ample lows, with balanced mids and highs. If you’re thinking of using your favorite wired headphones, do note that there’s no 3.5mm headphone jack, but you can use the 3.5mm to USB-C dongle included in the box. Just don’t lose it, though. 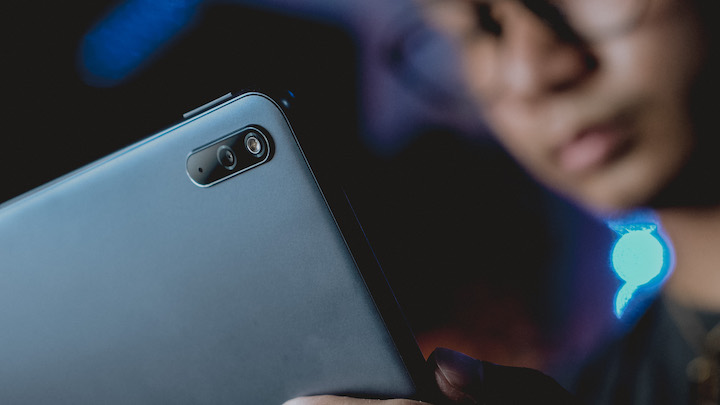 The MatePad 10.4 (2021) has an 8MP rear camera but it’s unlikely that you would use it as your go-to shooter. It’s great, though, for taking quick snaps for editing or sketching. The 8MP front camera, on the other hand, is great for video conferences or online classes. And, yeah, okay, occasional selfies.


When it comes to its camera quality, don’t expect too much. It produces noisy images, especially in low-light situations. The colors are pale and photos can be muddy in some scenarios. However, we can’t argue much on this segment because it is a tablet, after all. The same can be said for its front-facing camera, but it is enough for Zoom meetings.

The rear camera can record up to 1080p at 30fps. Unfortunately, the quality is the same as what we have seen when taking photos with this device, and videos can be very shaky since there is no OIS or EIS.

Yes, the cameras are disappointing from a smartphone perspective, but for creativity and communication uses, these are adequate.

Running on the MatePad 10.4 (2021) is Huawei’s EMUI 10.1 based on Android 10. And we all know that it doesn’t come with Google Mobile Services. So instead, we have Huawei proprietary apps like AppGallery. The AppGallery works fine and has many apps available for download, but you can also use APKPure or APKMirror to sideload apps that aren’t available on the AppGallery. 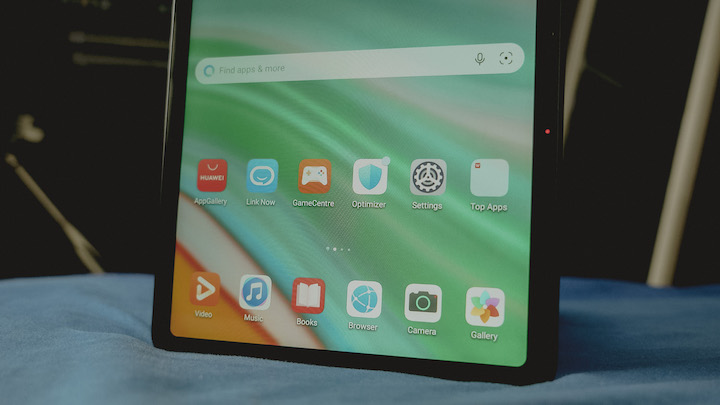 But, if you don’t mind doing some extra steps to sideload Google services, we found an easy workaround to do that. The app is called DualSpace and you can download it here. Once installed, open the app – finish the tutorial video – tap the Google Play store icon and from there, you can input your Google account. 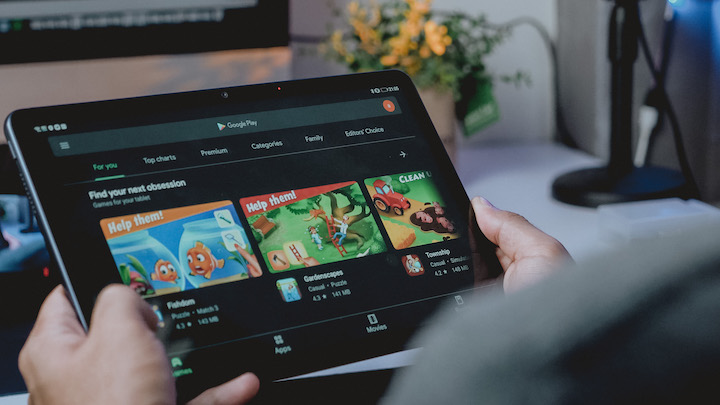 The MatePad 10.4 (2021) is still equipped with Huawei’s exclusive software features, which include Multi-screen Collaboration, Multi-Window which will help you take advantage of this device’s screen real-estate. It does have stylus support for better note-taking or some sketches using the Nebo app and MyScript Calculator. Unfortunately, the unit we have didn’t come with the MatePad’s M stylus, so we didn’t have the chance to test out this feature properly.

Storage-wise, the unit we have has 128GB of internal storage with 107.9GB of usable storage out of the box. If that isn’t enough, you can bump up its storage for up to 512GB. 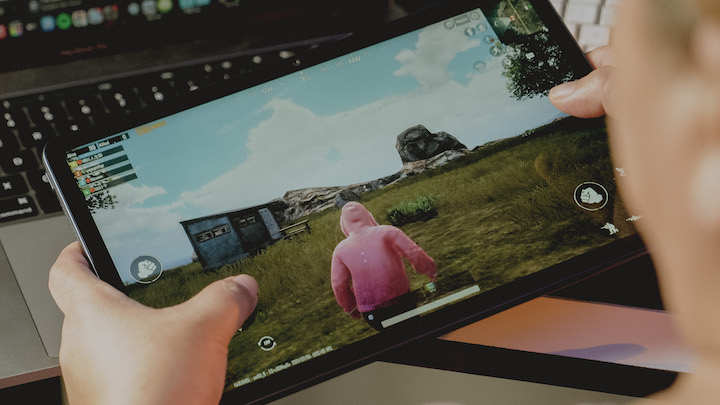 The Huawei MatePad 10.4 has Huawei’s Kirin 820 chipset coupled with a Mali-G57 GPU, 4GB of RAM, and 128GB of internal storage. Performance-wise, it feels snappy when multitasking. When playing games like PUBG mobile, Genshin Impact, and Asphalt 9, to our surprise, we didn’t experience any sign of hiccups when playing at the highest graphic setting. Still, some elements may take some time to load, so we suggest lowering graphics down to medium for a more optimized gaming experience. It does get a little warm when gaming for longer periods but it’s nothing out of the normal.

We ran our usual benchmarking apps, and here’s what we got: 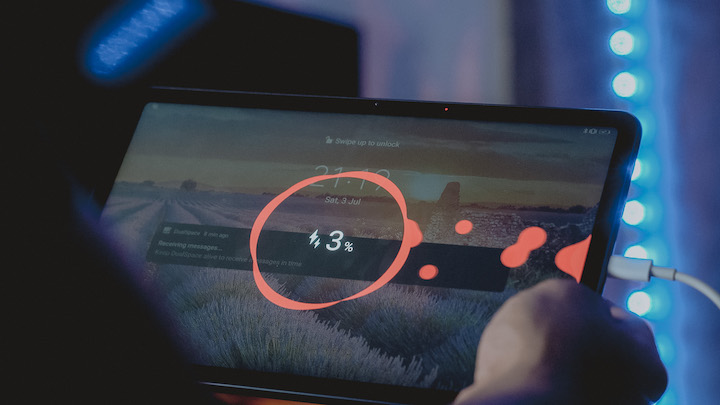 The unit we have is the Wi-Fi-only version which features Wi-Fi 6 802.11 a/b/g/n/ac, Bluetooth 5.1, and satnav systems. When it comes to its battery, it has a 7,250mAh capacity which got us two days of casual use. In our standard video loop test, which involves playing a 1080p video on loop at 50% brightness and 50% volume, in Airplane mode turned on with headphones plugged in, and we got 20 hours and 14 minutes of playback.
The Huawei MatePad 10.4 (2021) comes with a 10W charger which took us more than 4 hours to charge from 0% to 100%, but when I used a 65W PD fast charging adapter, it took us approximately 2 hours and 30 minutes. Meaning, it has faster-charging capabilities but not the full 65W. And if your smartphone is running out of juice, you can use the tablet as a powerbank as it supports wired power-sharing.

The 2021 Huawei MatePad 10.4 (2021) is just the same as its 2020 model except for an updated processor and GPU. For the price of PHP 18,999, you’ll get pretty good sounding speakers, long battery life, M Pencil support, and good performance for its class. However, it can be a bit difficult to recommend to users who are not accustomed to sideloading.

If you are a first-time buyer of a tablet, we suggest you look at some other brands. But if you are already in the Huawei ecosystem, the Huawei MatePad 10.4 (2021) isn’t a bad choice because you can take advantage of EMUI’s features like Huawei Share, Screen Mirroring to a Huawei laptop– if you have one, and MeeTime, which can level up your productivity experience.