Some two weeks ago, we mentioned talked about the Lenovo ThinkPad Twist. Yesterday, the company invited us and a few other media folks for the official announcement of the said Ultrabook. Check out our first impression after the break. One of the features that are common to most, if not all ThinkPad PCs is its durable body. And just like its ThinkPad siblings, the Twist is also outfitted with the same military-tested Magnesium Aluminum chassis which gives a solid and premium feel.

In addition to its lightweight but sturdy body, another trademark of ThinkPad computers is outstanding keyboard. Lenovo has equipped the Twist with their signature island-style keyboard with evenly-spaced and slightly convex keys which provide a very good tactile feedback when pressed. It also has a spacious palm rest that adds to the comfortable typing experience. 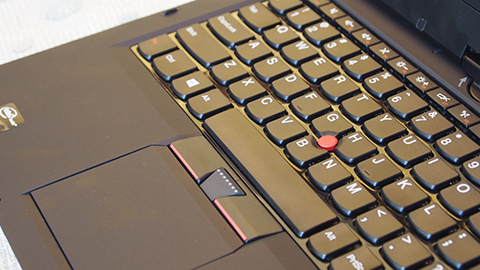 The clickpad and trackpoint (the red thingy found in between of G, H and B keys) are a familiar sight to those who’ve used a ThinkPad before. Both peripherals offer an admirable pointing experience which is typical to most ThinkPads. Though Lenovo is still aiming at the SMB consumers with this Ultrabook, the Twist gives its potential users other ways to use their PC besides work thanks to its swiveling display. There are four ways consumers can use this Ultrabook; Typical Notebook mode, Tent Mode, Presentation, and Tablet.

The panel is connected to the main board by a single metal hinge which seems pretty rigid. Not convinced with what I saw (and felt), I asked Lenovo’s SMB Product Manager about the durability of the hinge (how many swiveling, closing and opening can it withstand). He said he was not sure with the exact number, but Lenovo had the ThinkPad Twist’s hinge undergo (and pass) a thorough stress test before the company mass manufactured the ultrabook. A ballpark figure would’ve been better, but his words is good enough for me. 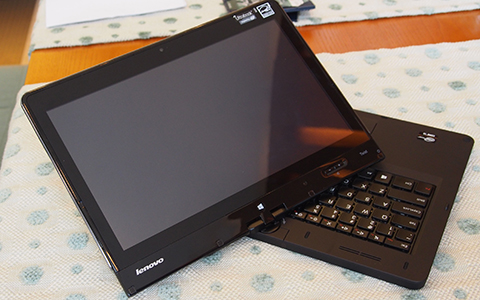 The ThinkPad Twist’s display panel has a 1366 x 768 resolution. Lenovo could’ve equipped it with a better display, but it really isn’t as bad as some of you may think considering that the Twist only has 12.5-inch screen.

Above the display (when used in Notebook mode) is a 720 HD camera and the Twist’s accelerometer. Speaking of the accelerometer, I wasn’t too impressed with its ability to identify the Ultrabook’s orientation. It was spotty for the most part and has a tendency to shift the display in the wrong direction. Lenovo equipped the ThinkPad Twist with a 4-cell Lithium-Polymer battery which is said to last 7-8 hours. The battery is non-replaceable and is not covered by the standard one year warranty that is bundled with the ultrabook. Having said this, we strongly suggest potential buyers to get the three years extended warranty for an extra fee which covers parts and service as well as the battery.

The Lenovo ThinkPad Edge S230U aka Twist is now available in select Lenovo outlet and partner retailers for Php57,000.