NVIDIA’s Pascal architecture was released back in April 2016, so needless to say, the new GeForce RTX graphics cards are the company’s biggest launch in two years. They are powered by the new Turing architecture which is manufactured using a 12 nm process. Also making an appearance here are the Tensor cores we saw from the Titan V, that enable NVIDIA’s new Deep Learning Super Sampling (DLSS) technology. Finally, of course we have RT cores which are responsible for NVIDIA’s latest pursuit in graphics technology — ray tracing. 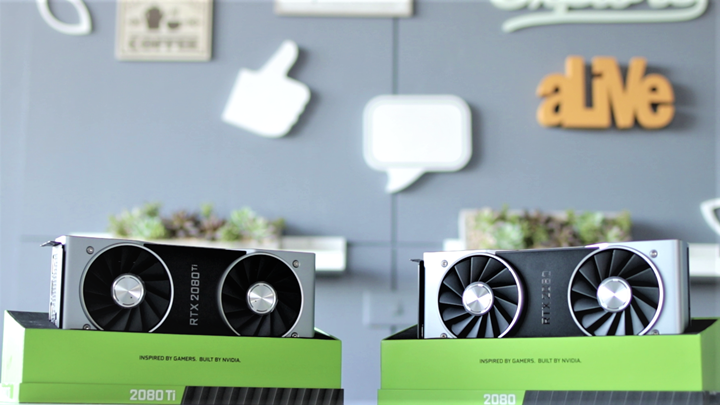 Since we witnessed its launch at Gamescom 2018, we have been anxiously waiting to get our hands on these cards, as it is always exciting to witness a new generation of products from a company like NVIDIA, where the gap between releases is years.

As of now, we don’t have anything to showcase the RTX 2080 and 2080 Ti’s ray tracing and DLSS performance other than some demos provided by NVIDIA. We opted not to show these, and instead focus on the cards’ performance in traditional rasterized games and benchmarks. Aside from the new technology under the hood, this time around the Founder’s Edition cards have a new design, so let’s start with that.

Just looking at the numbers, we can see how much improvement there has been architecturally. The Turing cards have lower base and boost clock speeds compared to their Pascal predecessors, but they do perform better. We see a sharp increase in memory bandwidth thanks to the use of GDDR6 memory, as well as a whole lot more CUDA cores in the case of the 2080 Ti.

It’s also worth noting that Turing is more power-efficient than Pascal, as even the 2080 Ti manages to have the same power draw as the 1080 Ti despite performing a lot better. .

Compared with the Founder’s Edition cards from previous years, the box remains largely unchanged. When opening it, all you basically get is your graphics card, some manuals, and in the case of RTX, a DisplayPort-to-DVI adapter. While we do agree that DVI is relatively outdated in this day and age, it’s nice that NVIDIA hasn’t completely abandoned it. 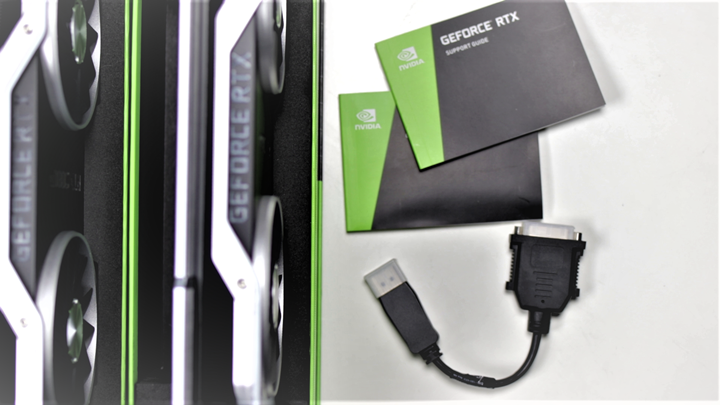 The first thing you notice when taking a look at the new reference design is definitely the cooler. We no longer get that traditional, iconic blower-style cooler that has jet engine aesthetics. Now, we have a pretty hefty cooling setup that utilizes dual 13-blade axial fans and a vapor chamber system. 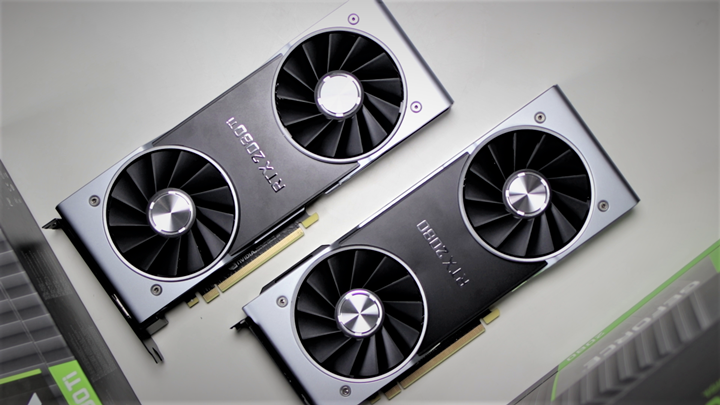 Aside from improved cooling performance, perhaps the biggest takeaway from this new design is acoustics. NVIDIA’s old blower-style coolers didn’t just look like jet engines, they sounded like them too. It can be argued that blower-style coolers are especially optimal for small form factor PC builds, or could be left alone doing its own thing because much of its cooling and airflow is self-contained. 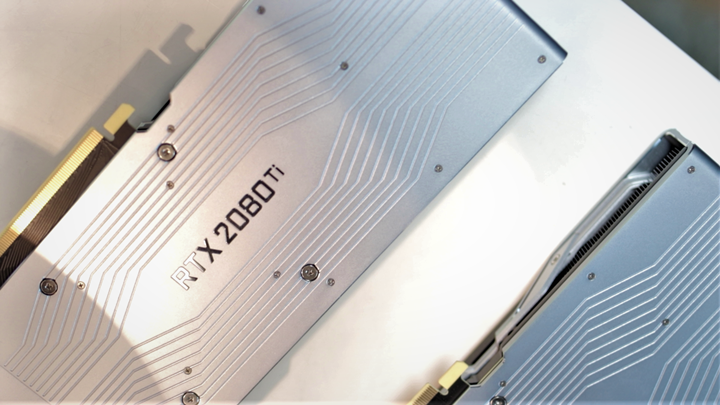 Looks-wise, it’s immediately a lot less angular than before and has a more plain, boxy design. The shroud and backplate are made from diecast aluminum, and look really good despite being so simple. Both at the backplate and in between the two fans, we find the RTX 2080/RTX 2080 Ti text in embossed silver lettering. On the side of the cards, we have the “GeForce RTX” text in embossed silver lettering as well, but this one lights up green when your PC is powered on, in typical NVIDIA fashion. 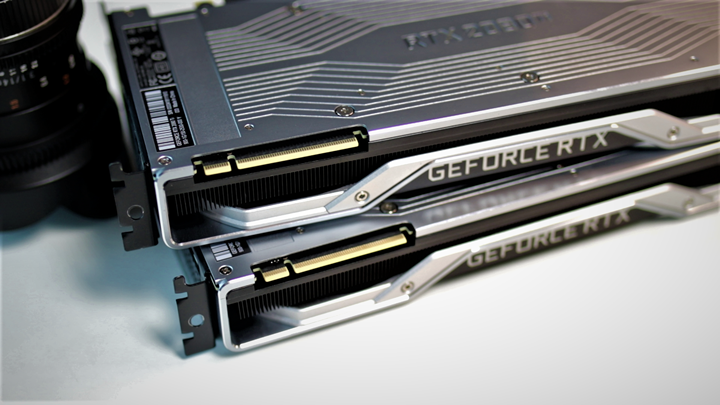 Behind a removable cover in the form of a false section of the shroud, we find the NVLink connector which is used to hook up multiple cards together; NVLink is basically SLI, but much better. As for ports, as we discussed earlier, DVI is gone. We have one HDMI 2.0, three DisplayPort 1.4, and even a USB Type-C port. HDMI 2.1 doesn’t make an appearance here, but the DisplayPort 1.4a ports can support up to 4K 12-bit [email protected] 120 Hz, or even 8K 12-bit HDR @ 60Hz over one cable. NVIDIA is also gearing up for the advent of VirtualLink, which enables VR headsets to function over a single Type-C cable.

The new design, overall, is a step-up for NVIDIA Founder’s cards. Build quality is still top-notch, and NVIDIA’s signature aesthetic has not strayed away too much, if at all.

While we do not have a proper test bench setup for benchmarking, our setup emulates a final use-case scenario, which is a high-end gaming/content creation rig. 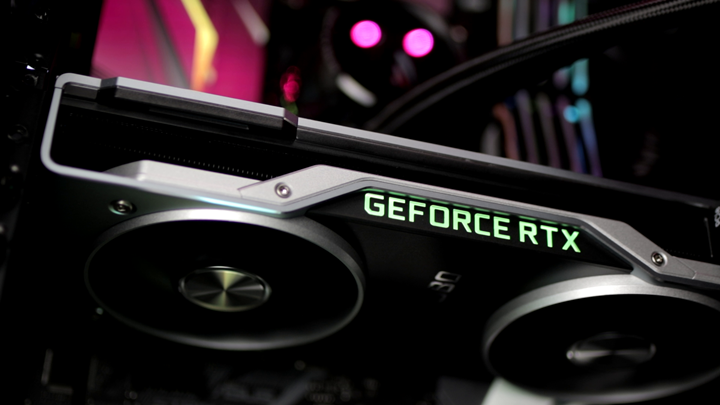 Now that this has been established, let’s get to performance numbers.

Again, since we don’t have a lot to go off of with respect to DLSS or real-time ray tracing, we are testing the RTX 2080 and 2080 Ti with traditional rasterized games and benchmarks. We have all the settings pretty much maxed out to show absolute worst case scenario. 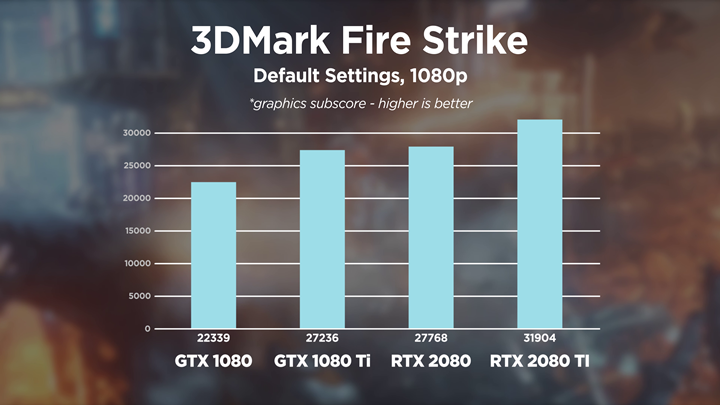 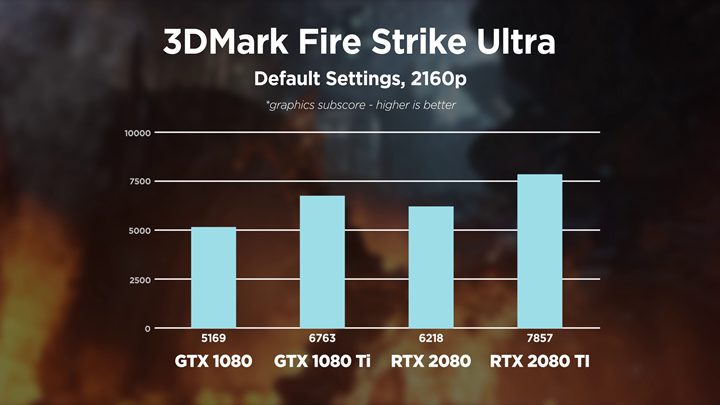 As we can see with the 3DMark Fire Strike tests, the RTX 2080 is actually outperformed by the GTX 1080 Ti in Fire Strike Extreme and Ultra, and by significant margins, too. Meanwhile, the RTX 2080 Ti stomps the rest of the bunch. 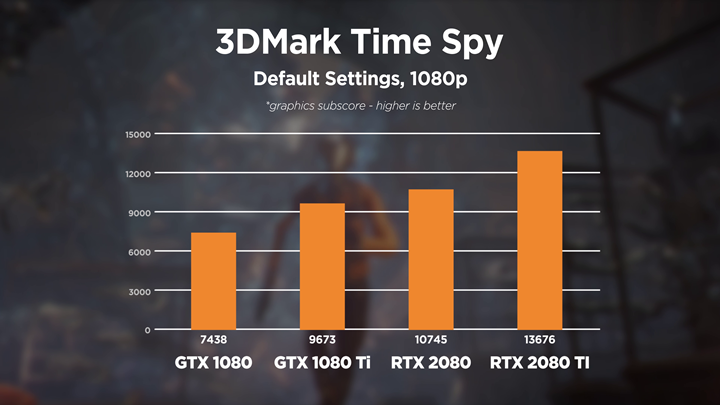 3DMark Time Spy, which is a DirectX 12 benchmark, gives us a clear picture of what we expect. The RTX 2080 outscores the GTX 1080 Ti this time, and by a lot. 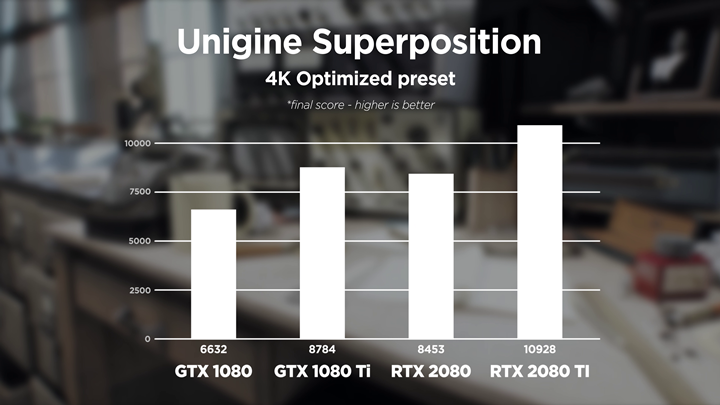 In Unigine Superposition, we find the expected upward pattern in the 1080p test, but bumping it up to 4K results in a slight increase in the GTX 1080 Ti’s score. It’s only about 300 points higher than the RTX 2080’s score.

So far, we have a slight pattern that will be more evident in the gaming tests — the RTX 2080’s performance is similar to that of the GTX 1080 Ti. 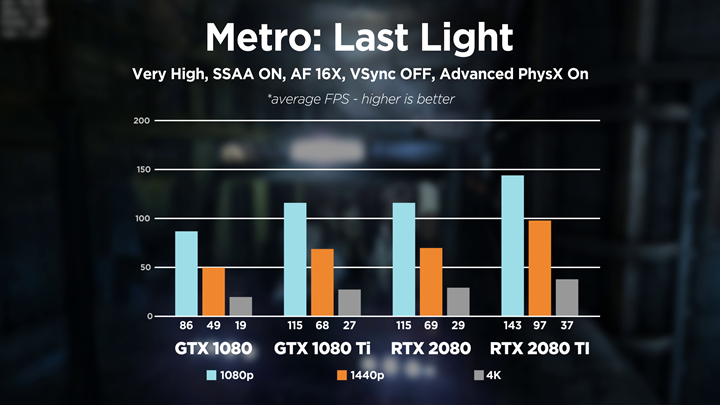 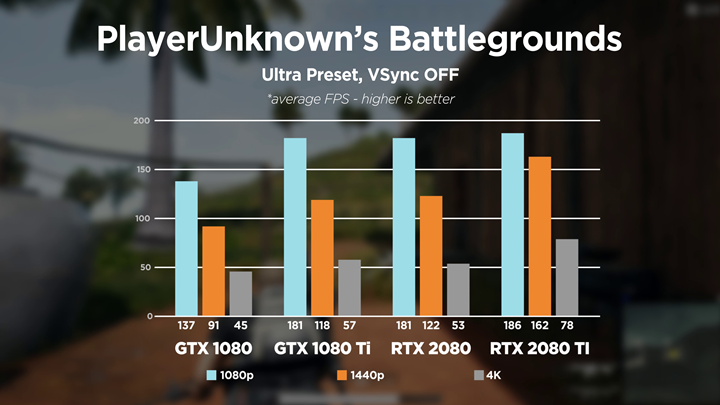 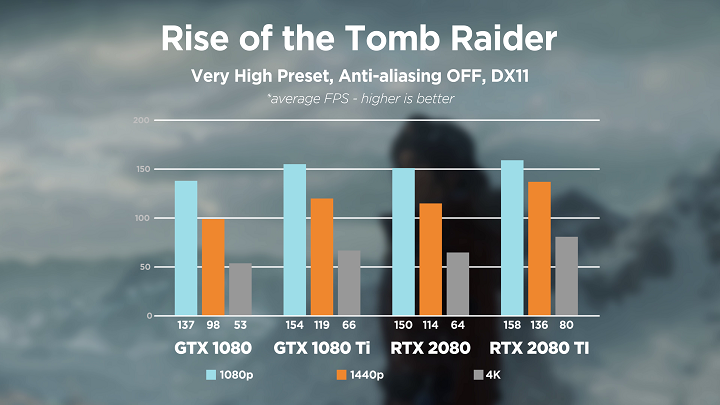 Across all of these titles, it’s evident that the RTX 2080 is getting almost the exact same numbers as the GTX 1080 Ti, and is sometimes outperformed by it. The RTX 2080 Ti, on the other hand, is looking to be an absolute beast for 4K @ 60Hz gaming. It failed to reach the 60fps margin in Deux Ex: Mankind Divided, Metro Last Light, and Far Cry 5, but remember guys — these were run at the highest possible settings. All that needs to be done to hit 60fps at 4K in these games is to dial back the settings a little bit.

Based on what NVIDIA has promised with regards to real-time ray tracing and DLSS, this performance review shouldn’t stop there, but it does. Yes, the RTX 2080 and 2080 Ti are great performers, but we have a few problems here. The RTX 2080 is basically a GTX 1080 Ti with real-time ray tracing and Tensor cores, which we can’t even utilize until further notice from game developers. At $799, that’s a huge dent on your wallet for a promise that’s waiting to be fulfilled.

In the case of the RTX 2080 Ti, it’s definitely THE 4K @ 60fps graphics card right now, but it as well has a very steep price point at $1,199, which is even more so a lot of money for a promise waiting to be fulfilled.

So, what do we make of this? Turing has surpassed Pascal, NVIDIA GeForce RTX sounded pretty amazing at launch, the 2080 performs like a 1080 Ti, the 2080 Ti is a beast, and we would have more to say — but we can’t, since DLSS and real-time ray tracing aren’t here yet as promised.

The RTX 2080 and 2080 Ti are a pair of amazing but very expensive graphics cards, but both consumers AND the industry aren’t ready for them.