We’ve been able to acquire the new iPad and I thought it might be apt to compare it with one of the leading Android tablets around, the Transformer Prime. And to be fair to the iPad 3, we’re detaching the keyboard dock on the Prime for this exercise.

Already wrote and posted some unboxing photos over at TechWireAsia as well as some first impressions so we’re done with that and we can go straight to the comparison. Comparing the new iPad 3 to the Asus Transformer Prime might look easy on paper but actual features will vary and be in favor of the other during real-world use.

Let’s look at the specs first so we get a bigger picture, then we’ll dissect some of the key features. 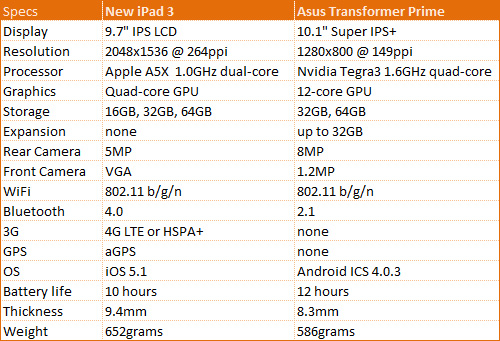 First up is the display — clearly the new iPad, with its 2048×1536 pixel resolution, beats the crap out of the Transformer Prime which has only 1280×800 pixels. Well, this is true if you’re like less than a foot away from the display. If you zoom in closer, you’d see this.

This is not something new. We always see this difference between a lot of smartphone displays. 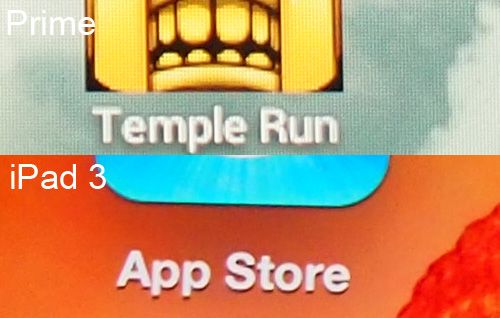 However, at around 2 feet or farther, the sharpness and crispness between the display of the two tablets are already indistinguishable. The Transformer Prime also uses a more advanced Super IPS+ screen compared to the regular IPS LCD on the iPad so the Prime got some redeeming factor here. Still, the iPad with its full HD display prevails. 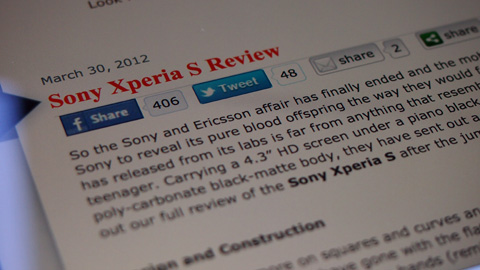 The camera on both tablets boast of full HD 1080p video recording. On paper, the 8MP camera of the Prime beats the iPad 3’s 5MP shooter but in the end it’s the quality of photos and videos that will matter. So far, the photos on the iPad are much more focused, cleaner and sharper. It’s still too early to tell since I need to get more samples but for the time being, I’d say the iPad has the upper hand. Pure processing power is the name of the game for Android tablets and the Transformer Prime boasts of the best chipset a tablet can have. On the other hand, there was also a lot of confusion about the processor on the new iPad — it’s actually a dual-core A5x chip with quad-core graphics.

Apple was clever to focus the marketing and make it sound like the iPad has a quad-core chip (hence, they tend to higlight it as an A5x chip with quad-core grahics). In comparison, the Transformer Prime uses an NVidia Tegra 3 chip — that’s a quad-core processor running at 1.6GHz paired with 12-core graphics.

Based on the number of cores alone, the Prime trumps the iPad 3 in this department. However, actual performance might vary especially that the two tablets use different operating systems. We’ll have to look for an even playing field to fairly measure this but for the meantime, I’ll give the point to the Prime. 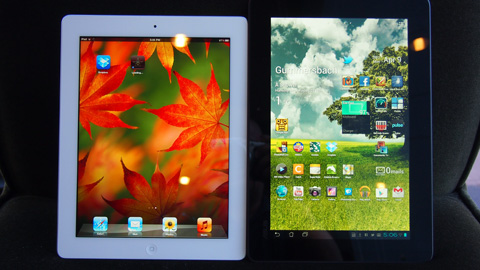 The new iPad has features that are absent or lacking on the Transformer Prime — cellular features (LTE/HSPA+), built-in GPS (Asus dropped the GPS in their specs sheet) and a faster Bluetooth 4.0.

The Transformer Prime got a bit of an edge over the iPad with the following — higher entry-level storage (32GB vs. 16GB), option for removable storage (via mciroSD card slot), a thinner and lighter profile, and allegedly better battery life (needs to be tested). Again, we’re not counting here the benefits of the keyboard dock and extra battery that comes with it.

The biggest disparity though between the two is that the Transformer Prime has been around since first week of February (albeit on a limited release) while the new iPad has not yet been released in the Philippines.

just asking if, transformer prime is available in the Philippines already? Ive been waiting this since March, as of end of April. its not yet available in Octagon.
Thank you

How’s the Wifi performance of the Asus TF201?
thanks!

btw, how’s the gps function? i’ve that Asus has dropped their GPS specs..

the gps is quite weak. but they are giving away now an external gps dongle (if Im not mistaken) just to address the issue of gps… I signed/registered my prime at their website and also signed to get my free external gps dongle (forgot exactly the name). try to search it on the net about that…but basically, if you want to try a tablet (aside of having a typical apple tablet), prime is a good alternative…so far, Im enjoying it…

Thank you again.. yeah i think i can do more with this than other tablets.. no offense to the ipad users.. ^_^

Thank you for that feedback Paolo…. been thinking for a while now which to choose between these tablets.

Hello! Im using transformer prime and i think it`s a good tablet. Way betterthan ipad. My sister is using ipad and im using prime. Apps are numerous in ics. Battery life is really long. Really edgy! One thing that is quite unfortunately, accessories are hard to find in PH.

just wondering how about applications for ICS? does it have a wide range of apps already? I’ve read some forums that there are few apps for ICS..
thanks

You own an iphone as a status symbol. But you talk like walang pinagaralang skwater. I guess you are a great evidence for his point. Social climbers.. And i guess you even dont have any idea what your iphone can do, aside from fb at instagram. Ehehe.

Geez many iphone users are fuck**n dumb and SOCIAL CLIMBERS
I used to be an apple user but now an android lover. You just can’t say that android users can’t afford iphone 4s. Also one more thing high end android phones are more expensive than your beloved iphone heck i could even afford to buy an iphone 4s every month. Marami ako kakilala nka iphone 4s pero may mga utang and naka jeep lang I pity them.

Without Apple, there will be no fanboys.