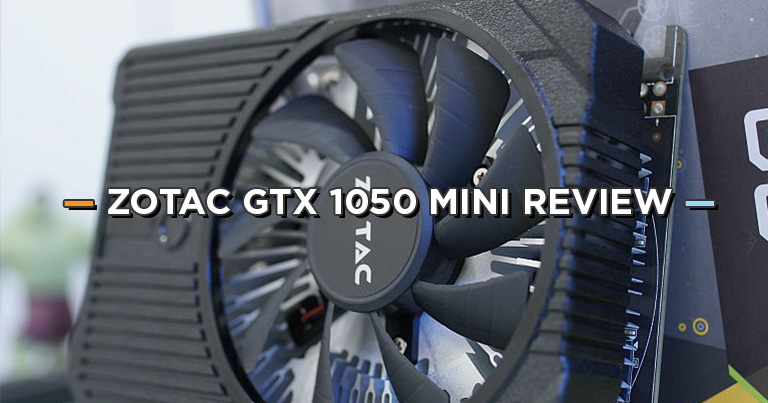 A couple months ago, NVIDIA launched the GTX 1050 and 1050 Ti less than a month ago. It was highly-anticipated since its first rumors surfaced around August, pointing to a sub-$150 card that can handle 1080p gaming that is perfect for general competitive games such as Dota 2 and CS:GO.

Fast forward to the present, we now have the Zotac GTX 1050 – a $109 graphics card aimed at the masses yet capable of handling 1080p gaming at mixed settings with a constant 60fps in today’s latest games. While not advertised as “VR Ready”, the GTX 1050 is still a sweet spot for those looking to game in a budget.

Judging from the specifications the Zotac GTX 1050 is slightly faster than the 1050Ti in terms of overall clock speed, but is limited by its 640 CUDA core count. The 1050Ti, on the other hand features twice the amount of ram, which is common in Maxwell’s high-end card notably the GTX970 and GTX980. While most games today require more than 2GB of RAM as standard, it is always good to future proof yourself with the 4GB Ti version. 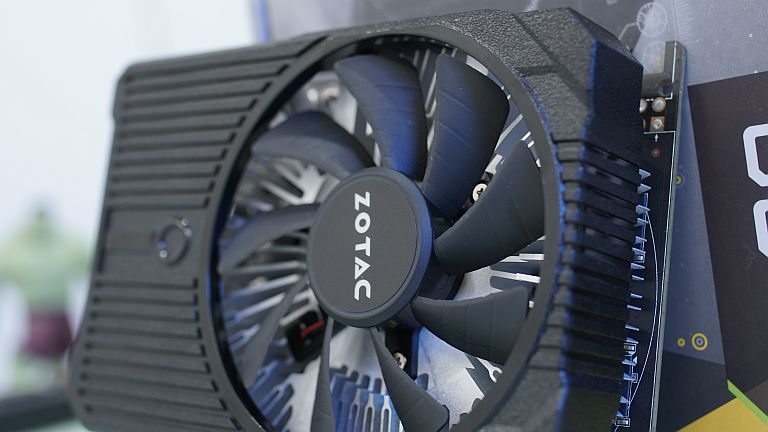 The standard non-OC/dual fan versions of Zotac’s GTX 1050 has a small form factor that is perfect for ITX/Mini-ITX builds. While featuring a single fan design, we noticed that the cooling performance is decent considering there is no special cooling feature or hardware involved. This could be due to the GTX 1050’s architecture being a low-power consuming card thus reducing heat output regardless of overall performance. We’ll get more detail into that below. 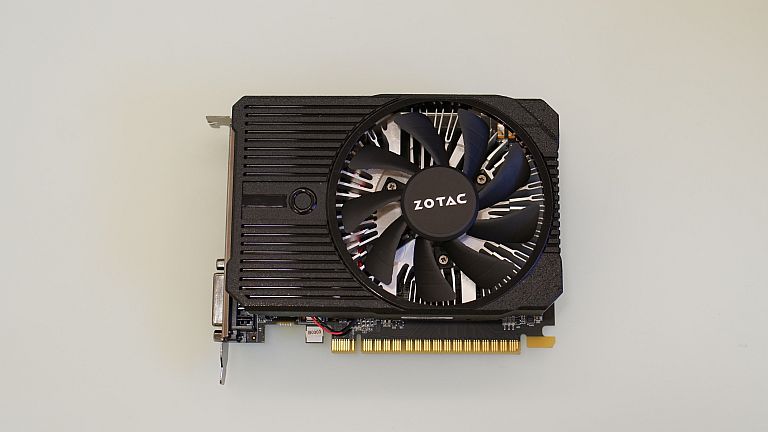 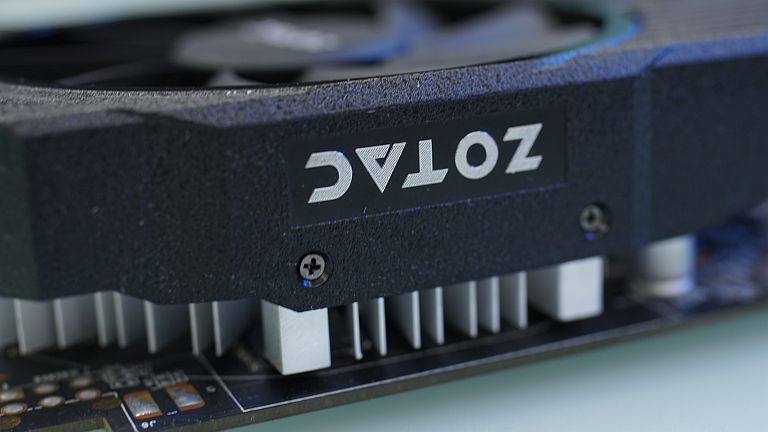 Zotac kept the GTX 1050’s design minimal and simplistic. It doesn’t feature any lighting nor even a backplate which is expected of a sub-$150 card. While small, the build quality is superb.

Unlike the higher end cards of Zotac that uses a metal/aluminum body, the Zotac GTX 1050 Mini, like all of Zotac’s entry level cards, is made from high-grade plastic that doesn’t feel as if it’ll break anytime soon.

The design of the GTX 1050 might not please everyone but is still eye-catching thanks to its simplistic and minimalistic design. It has an all black exterior with the Zotac logo printed up top while showing a jagged pattern on the front of the card. Like its big brothers, the Zotac GTX 1050 Mini features a single display port, HDMI, and DVI-D for connections. It is also capable of three simultaneous displays, Ever since its release, there has been no Pascal-based graphics cards utilizing an analog display connection such as DVI-I. The last card featuring a DVI-I port was the GTX 980, and even with Pascal’s entry level graphics card, it doesn’t support analog display as well. 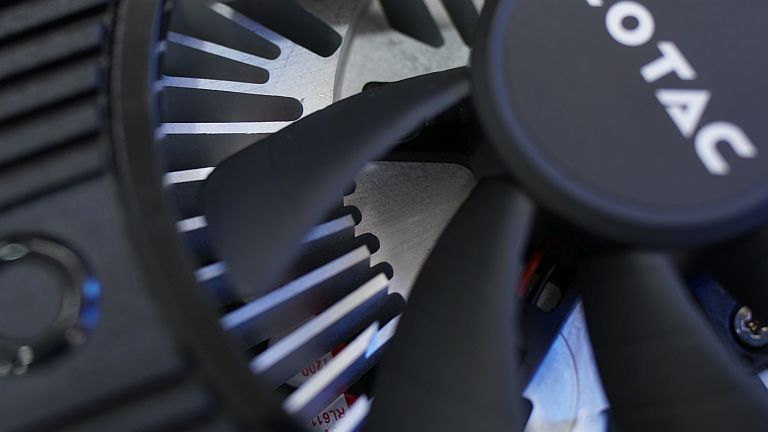 Since the card was made with ITX builds in mind, the Zotac GTX 1050 Mini sports a rather simple cooling system – a thin standard heatsink and fan with no special cooling features. Once again this is expected since this is an entry-level card, but still capable of cooling down the card to a reasonable temperature even when at full load running Unigine, 3D Mark, and today’s latest AAA games. We’ll get into more of that down below. 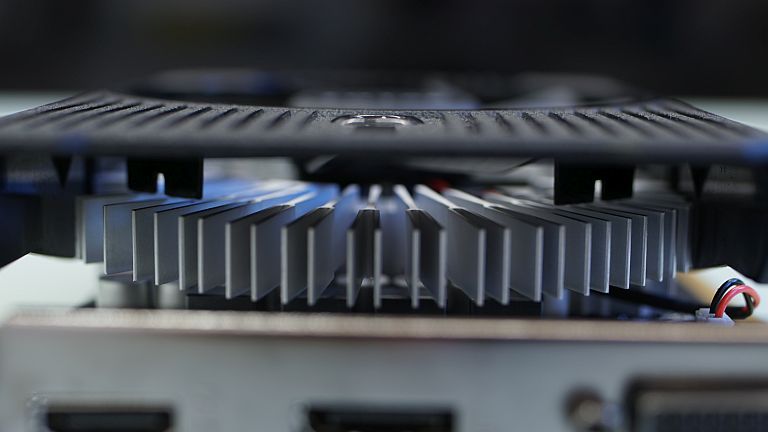 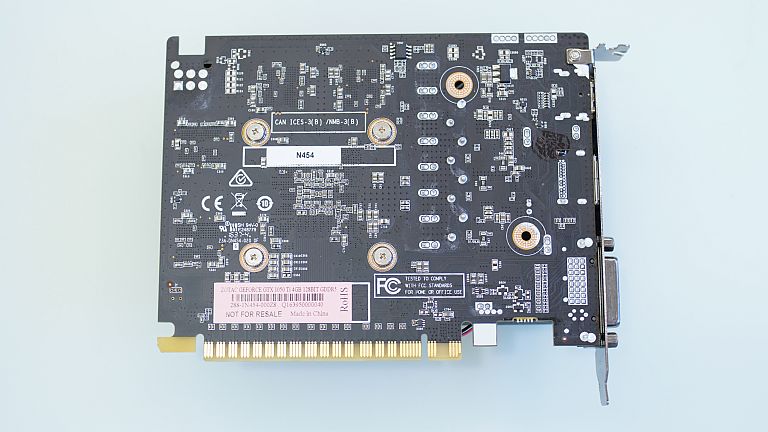 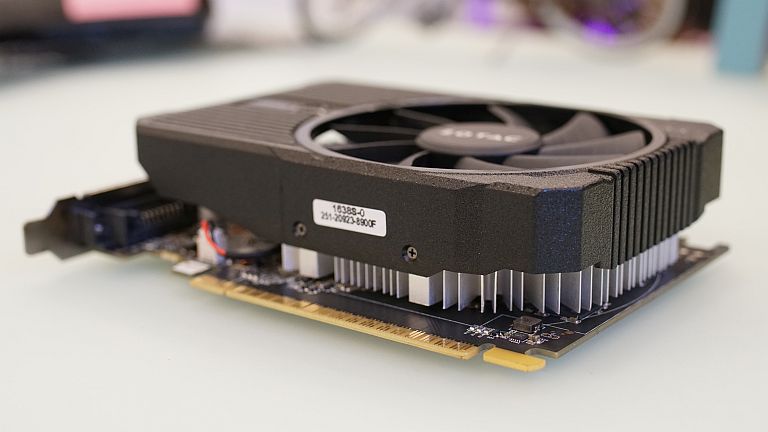 In our setup, we used an overclocked Intel Core i7 4790k to 4.5Ghz featuring a Samsung 850 Evo SSD, 16GBS OCed to 2666Mhz, and a Maximus VI Extreme motherboard. Despite that Intel’s latest Skylake micro-architecture is here, the overall performance difference between the i7-6700k and the 4790k is miniature. And since the GTX 1050 is an entry level card aimed at 1080p gaming, there shouldn’t be any bottlenecks at all.


The games that we tested are some of 2016’s AAA games as well as 2015’s AAA allstars such as Grand Theft Auto V and The Witcher 3. We tested the games at their high settings while some games are tested nearly at max. 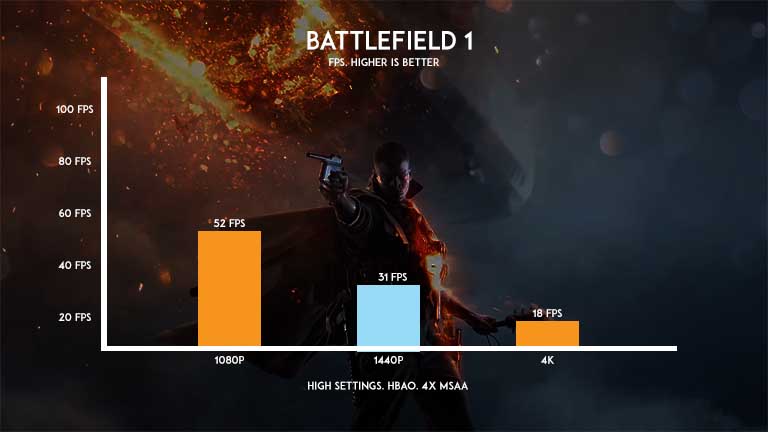 In 1080p the game played smoothly even during intense gunfights only dropping to around 32fps though averaging at a constant 50fps. The performance of the game, however, drops significantly when the resolution is set to 1440, possibly due to the lack of VRAM since the GTX1050 only features 2GB as well as fewer Cuda cores. In some situations, the framerate would drop as low as 18fps during intense gunfights. Regardless, performance was still solid but could be better.

4K gaming is not recommended as the game quickly failed, averaging below 20fps. In most situations, the game would drop to 7fps and goes around 10-15fps depending on the scenario.

Overall, for 1080p gaming, the GTX1050 is a good choice for budget gamers or people that are looking towards their first build. While not so entirely graphical, Civilization is still one of the best games to benchmark especially if you’re looking for CPU over GPU performance.

In max settings with 8X MSAA, the game averaged 34fps while dropping only to 23fps as its lowest. The game is extremely well-optimized and overall performance was fluid, despite the rare dropping framerates. Even at 4K, the game was still playable, though might be demeaning for some players as it can be sluggish especially when there are large armies. Doom 2016 is very well optimized and 1080p performance was fluid. However, the game felt sluggish in 1440p as it was leaning towards a sub 30fps average. Although playable, the game might not satisfy everyone especially since the game drops as low as 18fps in intense scenes. This is most likely due to the limited VRAM of the GTX1050, as textures are larger in 1440p. 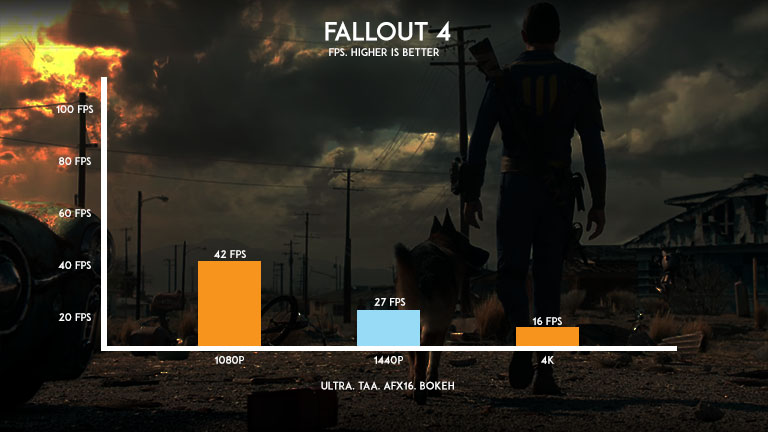 While not the most graphically intensive game, Fallout 4 still proved a challenge to some graphics cards. In 1080p gaming the game was smooth running a constant 40fps while dropping only as low as 29fps (in graphical scenes), while in 1440p the framerates crumbled, drawing only an average of sub 30fps. 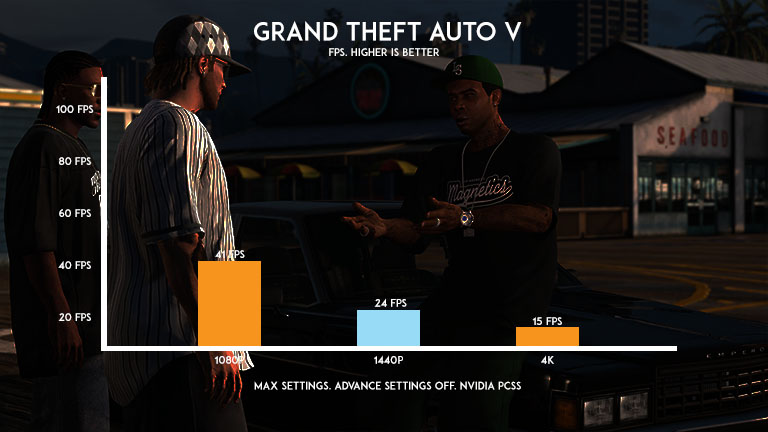 The GTX1050 managed to performance a solid 40fps at max settings with advanced settings off. On higher resolutions, however, the game dropped its framerates significantly averaging only around 20fps at 1440p. At 4K it’s unplayable especially during gunfights. 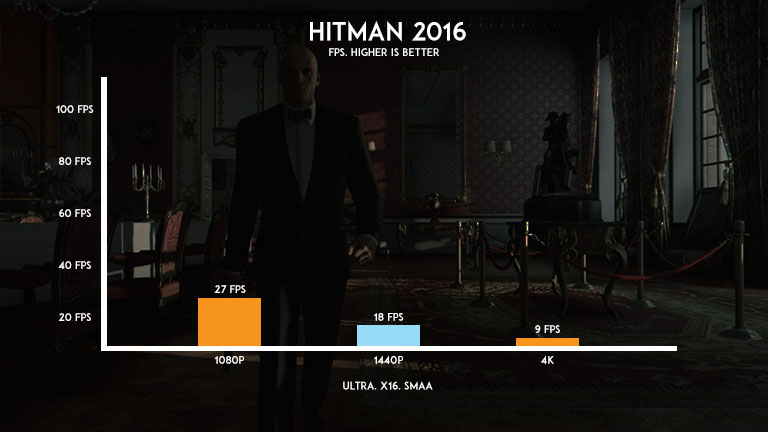 The 2016 reboot was graphically intensive, though this could possibly be due to poor optimization as framerates would constantly drop. Regardless, the GTX 1050 managed to hold on a solid almost-30fps with Ultra Settings at 8XMSAA. Though at higher resolutions the game’s performance dropped significantly as the limited VRAM bottlenecks the card. The game is simply not playable in higher resolutions, especially in 4K.

Rise of The Tomb Raider 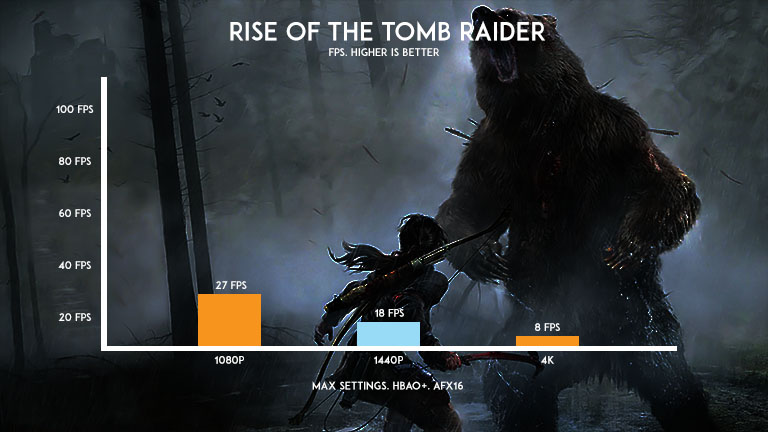 While Rise of the Tomb Raider is AMD optimized, the GTX1050 still managed to make it playable. The game scored around 30fps an average at 1080p in Ultra settings. It’s unplayable starting from 1440p, rendering the game’s large textures slower. 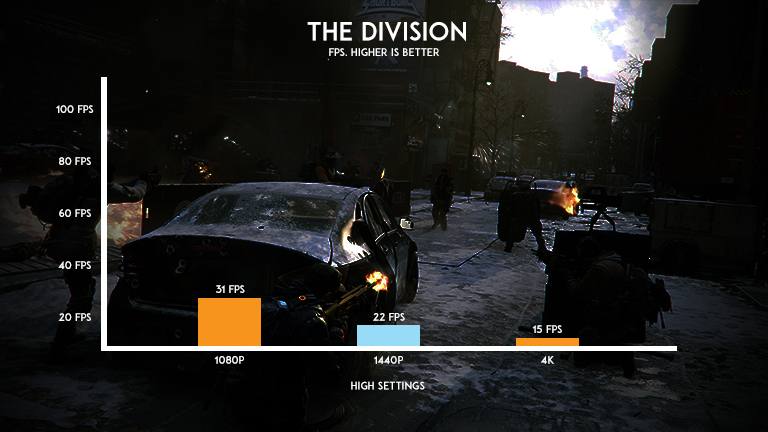 The Division was playable in 1080p resolution like the others, however, in high resolutions, performance quickly fell due to the lack of VRAM. Graphics wise, the game is very demanding especially if NVIDIA’s custom Hairworks enabled, rendering high-end cards such as a GTX980 incapable of maxing it out at 1080p. With Pascal, however, the story is different although we wished it could have done better.

The GTX 1050 only managed to run the game at a constant 24 fps at 1080p. This could be due to the limited VRAM as the Witcher 3 features many large textures, forcing the card to use the system RAM in order to run the game, drastically reducing performance. In 1440p and 4K, the game is unplayable.

While it may not be the best option when running today’s games, the GTX 1050 is still a noteworthy competitor due to its low price point and low power consumption. However, spending around $30 more could get you the GTX 1050Ti which is better thanks to its higher VRAM and more CUDA cores, allowing texture files to load easily. The GPU is capable of 1080p gaming at high settings although not in 60fps. You can play on medium settings, though, if you want to hit that 60fps mark. All in all, if you’re a budget gamer or someone investing on their first build, the GTX 1050 is a good choice.