Some reports have been circulating around the web about an unannounced incremental update (Android 4.2.2) for the Android Jellybean (no official announcement made as of the moment so we can’t confirm).

This news started when some folks from Brazil and Malaysia were surprised to see that their brand spanking new Nexus 4 is running on Android 4.2.2 when they checked the phone’s settings. Some folks who already have the latest Google phone reported that they also got the update OTA. 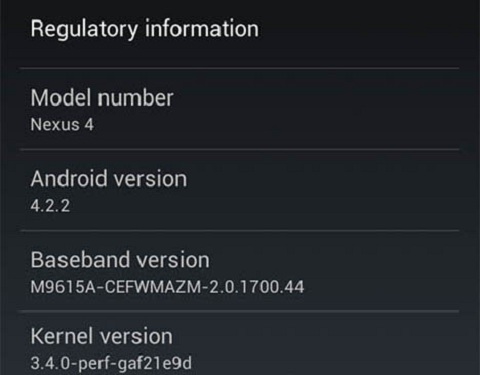 So what’s the buzz with this new version of the buttery smooth OS? Not a whole lot actually. In fact, reports suggest that the update is only a bug-fixer rather than being a completely different beast. And because Google has yet to comment about the said version of Android, there isn’t a lot of information to go around with.

So Nexus 4 users out there, check you device’s OS version, you might just have the newest version of Android without you even knowing about it. Oh and don’t forget to hit the comments or tip us if you do.