After the announcement of Android 4.3 last week, local units of the Nexus 7 and the Nexus 4 are already receiving updates of the new Jellybean flavor.

The first device to get the update was the Nexus 4 with owners reporting to have received the update several days ago while the Nexus 7 remains at 4.2.2. 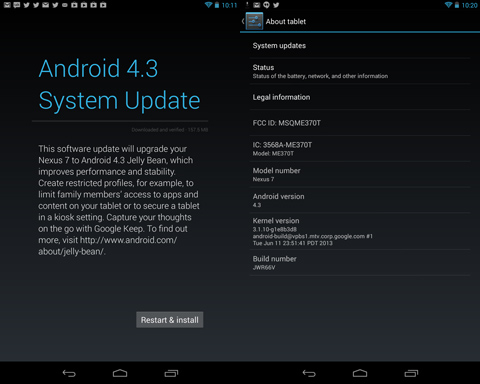 Today, the Nexus 7 finally got the notification of the update to 4.3. We’re still not sure whether the Nexus 10 has received the same update.

For details on what new features were improved or introduced in Android 4.3, check out our story here.

Received the update for my local Nexus 10 days ago. No noticeable changes except for most of my installed apps do not work. Keeps on saying “Android version not supported.” Examples are MX Player and Minion Rush. Guess we’re gonna have to wait for the developers to update their apps and make it Android 4.3 compatible.

got my update today, nexus 10.

I got Android 4.3 OTA last Saturday for my Nexus 7. Doesn’t feel all that different from 4.2.2

My Nexus 7 got the update three days ago, that’s Monday night.

Updated my N7 2 days ago and the performance has greatly improved.

Got the download the other day. It automatically donwloaded and prompted me to install it. Some apps don’t work on it yet. Those apps will probably catch up within the next few days as per the compatibility with this update.

I noticed some improvement, performance wise, but saw some graphics related bugs.

I just got the Android 4.3 OTA update for my Galaxy Nexus