Smart Communications recently announced its new LTE-A ‘5G’ service which got a lot of people talking. Instead of it being good news, many took it in a negative way saying that it’s all just a marketing hype. But what exactly is 5G? Is it really here? 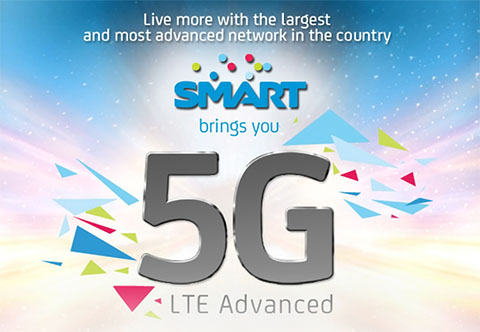 5G describes the upcoming generation of wireless networking. It is not a set of standard specifications that determine if the technology qualifies to be called 5G or not. As of now it is just used to describe the next-gen connectivity since there’s still no solid definition or formal agreement between companies of what it really is. Though this may be the case, 5G is expected to be 100 times faster and 1,000 times the capacity of LTE, faster streaming, and most importantly has the capability to cover wider range.

It is also important to note that experts see this technology being operational on 2020 at the earliest. This is due to the amount of time and money still needed to successfully finish the project.

One of the few handsets today with support for LTE-A is the Singapore-launched Samsung Galaxy S5 4G+ and there are no news of its local availability yet. Because of this, a lot of Filipinos still can’t make use of this new technology here in the country. The announcement of this service in the Philippines also reached overseas and attracted attention from an international site calling it a “bogus 5G technology.”

In Smart’s defense, one of the entries on their website’s FAQs section asks this:

To which Smart answers:

“LTE-Advanced is the next stage of development of LTE that offers significantly higher data speeds. It has been referred to, in some markets like the United States, as 5G. This means faster Internet downloading and video streaming, among other capabilities.”

What we’re seeing here is that the term 5G, as of now, still has a wide scope of definition making it easy to use loosely.

For us, having LTE-A or “5G” is still good news. The thing is, if there will still be Fair Usage Policy (and we’re pretty sure data capping will still be implemented) for its subscribers, having faster-than-average connection won’t do much good as it cannot be maximized – it’s just like being handed a key to a nice house that you can only live in for once a month.

Besides, many subscribers have yet to even taste the actual speed of LTE/4G in the country because of the limited coverage so the talk for 5G could only add salt to injury.

What do you think of Smart’s 5G technology? We put up a poll below just in case you want to share your thoughts on the subject. Do you believe Smart’s claim about their 5G connectivity?