GoPro to offer a quadcopter, spherical mount, and a 16-cam rig

GoPro to offer a quadcopter, spherical mount, and a 16-cam rig

GoPro announces that it will be coming out with not one, not two, but three additional products — a quadcopter, a spherical mount, and a 16-cam shooting rig. A DJI quadcopter carrying a GoPro

The first one they officially announced was the GoPro quadcopter. It is set to launch in the first half of 2016 and the company thinks it is in some ways, “the ultimate GoPro accessory”. GoPro CEO Nick Woodman also mentioned that it would still be consumer-focused so that should keep its price in the same range as DJI and Parrot. Next is the spherical mount. It basically houses 6 GoPro cameras that records all at the same time. The footage will then be stitched together to produce virtual reality kind of videos viewable via VR headsets such as Oculus Rift, Google Cardboard, and Microsoft HoloLens. Viewing the content online is also possible through YouTube 360.

Pricing is also undisclosed but the company mentioned it will be available later this year.

Check out this cool and interactive sample using a spherical mount. The rig shoots 360 degrees with better stitching points than the 6-cam spherical mount and tied with Google’s Jump, produces an immersive way of watching videos. In a nutshell, it aims to let filmmakers and even ordinary people create VR content easily once it’s made available for everyone. 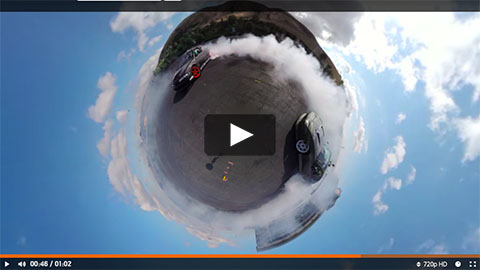