Home theater speakers, although varying in shapes, sizes, and design, all have one goal to meet: Provide an immersive experience for watching movies or playing music. What we have here is the JBL Cinema SB400 Soundbar and by the end of this review we’ll find out if these speakers are successfull in delivering its purpose.

The SB400 comes in a soundbar-subwoofer tandem which easily blends to any living room setup thanks to its sleek, all black design. These speakers have no physical wires connected in between them. Instead, they use Bluetooth connectivity to pair to each other so you could place the subwoofer anywhere in the room wherever it’s convenient. 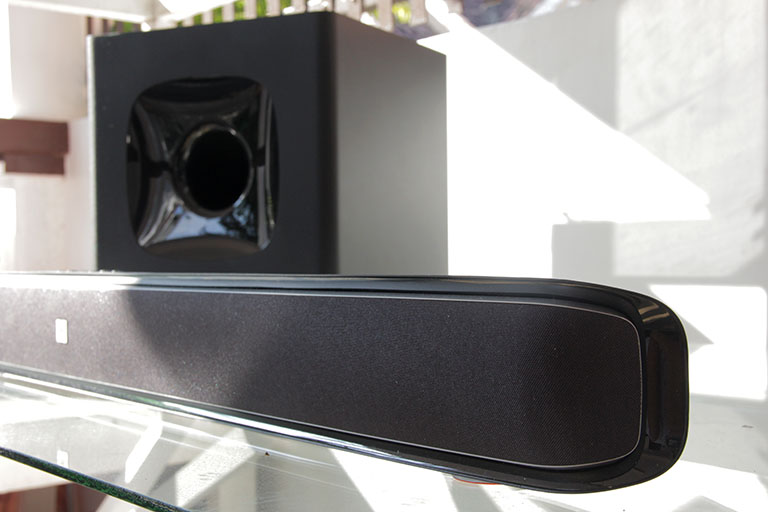 The soundbar is 43 inches long  and is designed in a way that the edges are somewhat pointed.  The bar isn’t that heavy and could easily be carried; it comes into play when you hang it on to a wall with its included wall bracket. 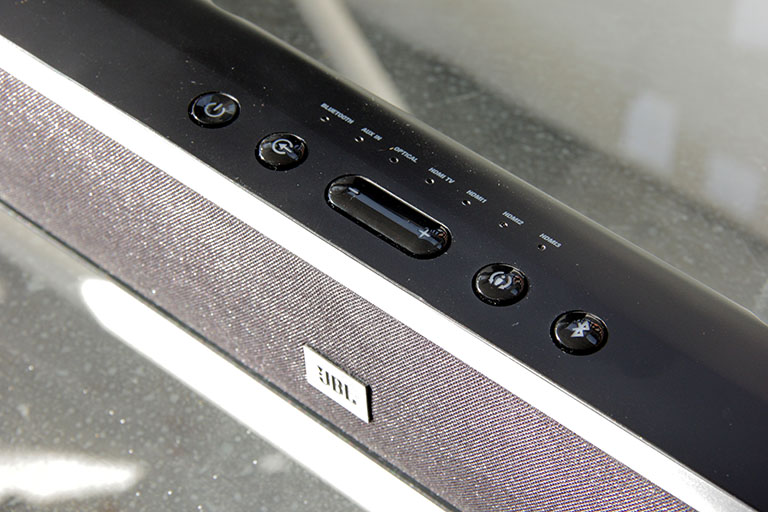 The center panel consists of a few physical buttons for power, changing sources, volume, sound modes, and pairing via Bluetooth. 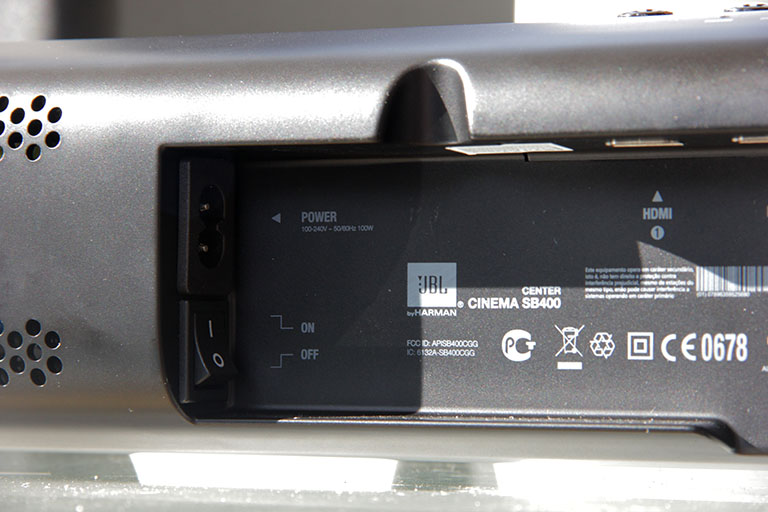 At the back we have the main power switch below along with the connectivity ports. 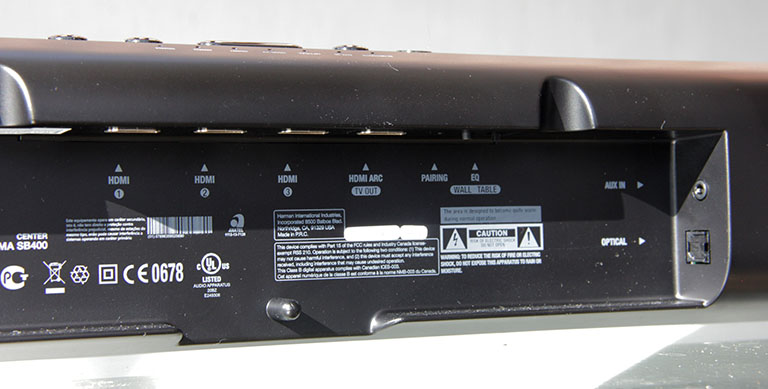 What’s really commendable about the SB400 is the abundance of HDMI slots that it offers its users. We usually see only one among its peers but this has three HDMI inputs plus an additional HDMI ARC output. Completing the connectivity area are the 3.5mm audio jack and optical slot for compatible televisions. 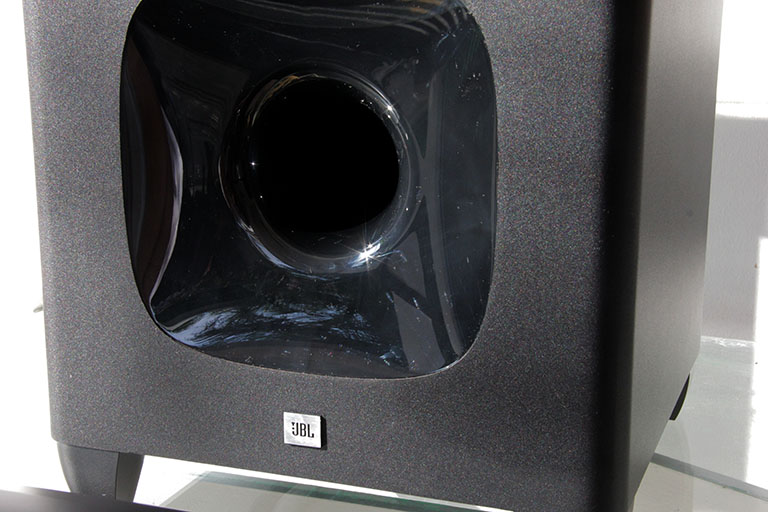 Moving on, the subwoofer boasts an 8-inch down-firing driver shelled in a square housing. The box is weighty and takes up a huge space, although we think the company could afford to do it this way since they already made it wireless and the ‘woofer doesn’t necessarily have to be beside the TV. 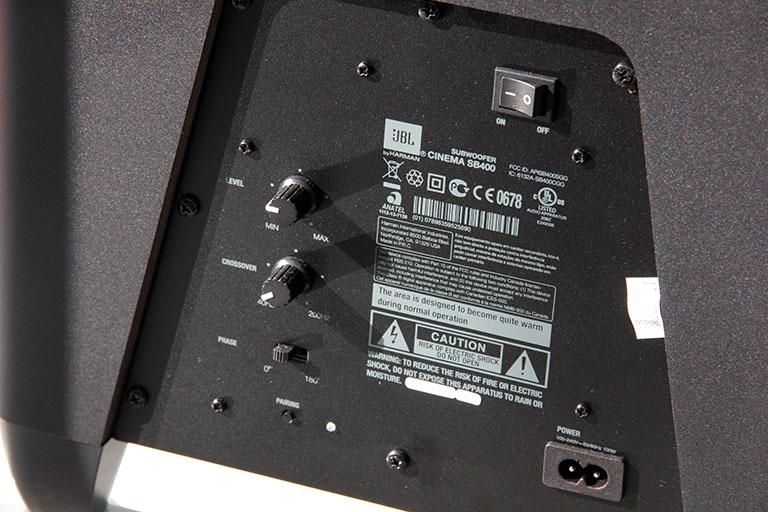 Turning it around and you’ll be greeted with a pair of knobs for tweaking the bass levels to suit your listening experience. Here we have the settings for Level, Crossover, and a switch to toggle 180-degree phasing. 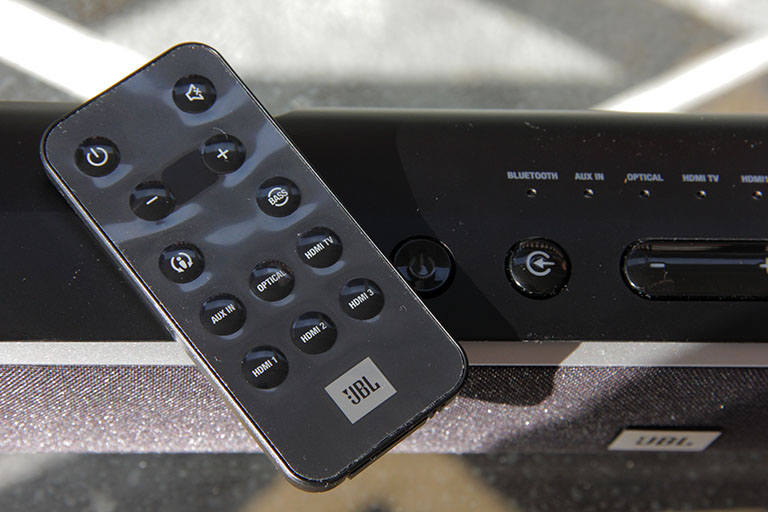 The SB400 also packs an array of features to further immerse the listener to the environment of the movie. For starters it has Dolby Digital audio tech that the company claims decodes film soundtracks in their native format, eliminating conversion stages that often reduce sound quality.

Listeners are also treated to virtual surround sound thanks to its Harman Display Surround Technology, although not a 5.1 setup. As we have already shown you earlier, users have full bass control by fiddling around with the settings panel behind the subwoofer.

The package comes with a credit card-sized remote control so you could switch sources and adjust the volume from the comforts of your seat — and it just makes sense given that the speaker system could host up to three different inputs. The thing is, the remote takes a significant amount of effort to operate. The buttons don’t easily get pressed and there were certain angles that the bar doesn’t read the commands from the remote. Basically, the design could’ve been improved to have a more sensitive signal.

Lastly, its Bluetooth connectivity wasn’t only made for pairing the soundbar to its sub, it could also stream music wirelessly by connecting to most Bluetooth-capable devices.

Since this is a home theater we’re testing, we used it more for movies and gaming rather than for music.

Excited to try it out, we initially played Furious 7 and did a break-in of the speakers on the movie’s car chase scenes. We immediately felt the power its subwoofer produced while the engines revved up, but then we weren’t quite happy just yet, so we started tweaking the bass settings. It took us a few minutes of getting our preferred sound, and once we did. we were satisfied with the result.

The bass levels are undoubtedly powerful, and literally shakes some of the things in the room (while on maximum volume). Mids are assertive and still surfaces despite the solid bass performance, while the highs follow the lead of the mid-range audio instead of flourishing on its own. Trebles could still be better, but altogether they churn out a well-balanced sound performance that successfully throws virtual surround sound (prominently heard while playing FPS games like Call of Duty: Advanced Warfare).

The JBL Cinema SB400 soundbar is a solid performer. It can be easily set up with the soundbar capable of being hung or placed in front of the television, while its subwoofer (although heavy) could be situated anywhere in the room and communicate to the central speaker via Bluetooth.

The subwoofer that maxes out at 200W doesn’t disappoint one bit, and the capability to tweak the bass levels is an added bonus. The company also didn’t fail when they claimed it shoots out sound around you using their virtual surround technology. If we would nitpick we would look at the delivery of the highs as something that could still be improved, although doesn’t affect the overall performance of the speakers.

What we didn’t like, though, was the poor performance of the included remote control. If JBL could produce a 2.1 speaker this impressive, they could surely make something better than this underwhelming controller even if it would cost a little bit more (hey, if you could buy a Php30K speakers you wouldn’t mind adding a few hundred pesos for a more decent remote, right? ).

It is currently priced at Php29,999, and as a whole is a good investment/starting point if you’re new to setting up your own home theater.