We’ve previously seen Misfit‘s activity wearing device, and now the company unveils a more affordable gadget that tracks what you do on the day, and even when you sleep at night. The company also released a new app that adds new features to its devices. 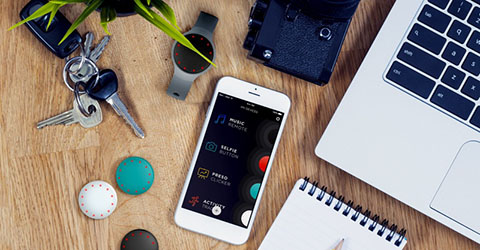 The Misfit Flash Link looks the same as the Php7K-worth Misfit Shine. It also has the same basic features (monitoring steps, calories burned, distance, sleep quality and duratio) but the new Flash Link is cheaper at $19.99 (approx. Php900 if directly converted). In addition, the tracker clips on to the user, instead of wearing it like a bracelet.

On the other hand, they also announced their new app — the Misfit Link. As mentioned earlier, this app offers new functionalities to the user like acting as a wireless camera shutter trigger and music controller.

The new Misfit Link app lets you use any Flash to take a selfie with your phone camera app or Snapchat; control your music with Spotify, Pandora, and more; or advance slides in a presentation. Additional functionality is coming soon, including IFTTT and Logitech Harmony integrations. The iOS app is available for download now; an Android version will be released next month.

Interested? It’s still unclear when the affordable Flash Link will be available in the Philippines, but if it does make it here there’s a good chance that we’ll be seeing it again on PowerMac just like the Misfit Shine.