As a new addition to Parrot‘s lineup of minidrones, the company introduces its Hydrofoil Drone which can be used on water and also by air. 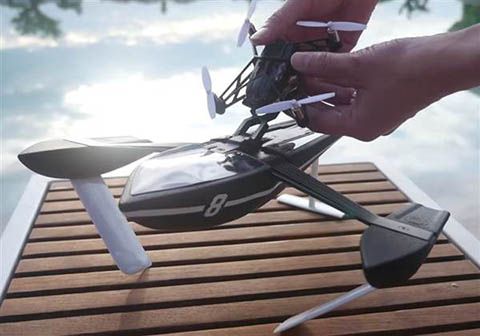 The boat features its own pontoons to easily glide through water. What powers it is a separate quadcopter called Airborne minidrone that you attach to the hybrid boat. Once activated, it flips up and works perpendicularly so it thrusts backward instead of downward and pushes the Hydrofoil Drone forward.

Moreover, you can also remove the Airborne minidrone and use it on its own as your usual quadcopter.

Just like its other minidrones, this is connected to a phone or tablet using Bluetooth, and is navigated via the company’s FreeFlight 3 app. Once maneuvering the Hydrofoil you can switch to its first-person view through the smartphone using the Airborne’s camera.

The Parrot Hydrofoil Drone can be had for EUR 169. To see it in action, check out its video demo.