iOS 8 has free calls and support for Tagalog keyboard

During the WWDC launch, Apple sped through the explanation of some features on the new iOS 8 and didn’t get to detail everything. Among those features are free calls using Wi-Fi, support for different languages including Tagalog, and more. 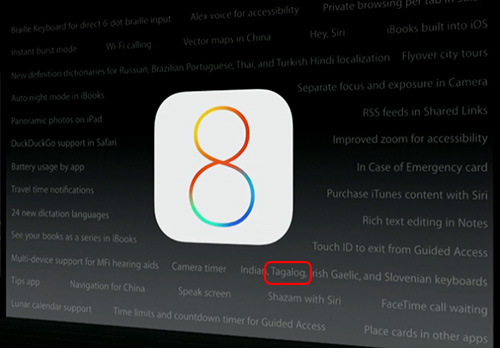 The image above was just flashed during the slide presentation without the company really diving in to each of them. As you can see, there are a lot of new things incorporated into the latest OS like Wi-Fi calling. Wi-Fi calling, as the name implies, is being able to call your contacts using only Wi-Fi connection. This feature has been around for Android, but will be the first time to be seen on iPhones.

If you’d look closely under the logo, there’s also new support for different languages — Tagalog included. The following is the list of new things, as compiled by 9to5mac, to expect once iOS 8 rolls out on September.